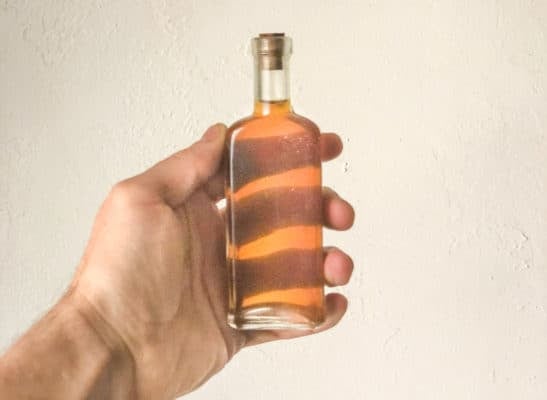 Liver ketchup is another piece of history I came across doing research on lamb and goat in an old Scottish book by An Comunn Gaidhealach (a seriously legit Scottish name) first published in 1907 under the title of The Feill Cookery Book. Like most of the old books I have, a lot of the recipes can be hard to reproduce: some need some modern interpretation or measurement standardizing to be approachable (handfuls and tea cups / choppies are popular measurements) while others might require some culinary understanding, like why you'd put egg whites into a salty liver sauce made from boiled liver, spices and herrings I'm going to explain. 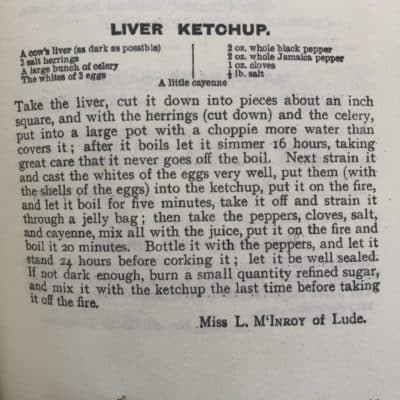 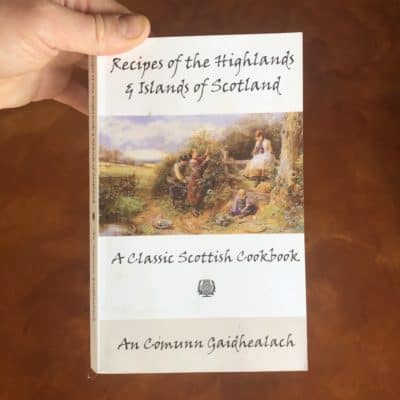 Besides being arguably the most creative way I've ever seen to use liver, it's also another another example of how the word ketchup and it's legions of cousins have evolved over time (read as you can make ketchup out of anything). Ketchup and castsups (derived from the old Asiatic fish sauces called ketsiap) were basically umami-rich or tart condiment sauces made from spices and different things--definitely not high fructose corn syrup and tomatoes. Like mushroom ketchup and garum I've mentioned before, they weren't thick sauces, but more along the lines of thin, salty condiments like fish sauce. 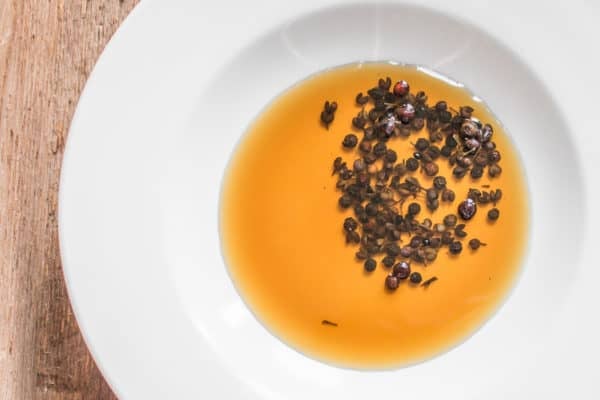 After cooking and clarifying, you add spice to infuse. Here I added dried wild szechuan peppercorns or zanthoxylum--they add a great, noticeable flavor.

At first read, I knew exactly what the sauce was, but the liver really piqued my interest. I was taught that boiling liver, or otherwise cooking it in water is heresy, the reason for being that livers generally have strong flavors, especially from ruminants like lamb, goat, and venison. Those strong flavors are pretty water-soluble, and having a chunk of liver fall into your stock would be, undesirable.

Also, boiling liver in water, or any meat, isn't going to give you a pretty liquid, and the original author knew this. Their solution was the same technique chefs use to make consomme and that my great grandmother used to make coffee. Egg whites (not yolks) mixed into a liquid and heated, will purify the liquid and make it crystal clear. Now we're getting to the point of a fish-sauce analogy. 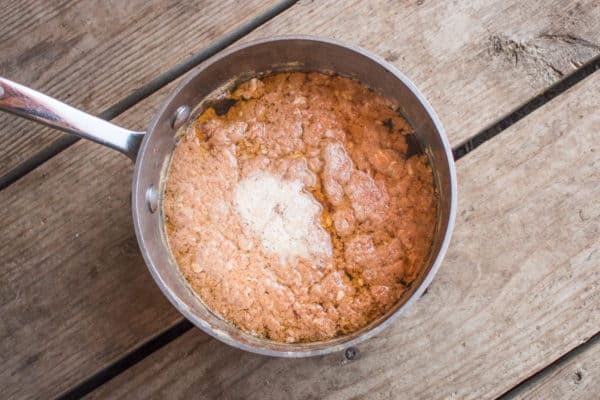 This is what a "raft" looks like when using egg whites to clarify liquid. Around the edges you'll see it's crystal clear.

In the end, I changed a few things. Instead of boiling, I brown the liver and then brown some sugar in the same pan to help build flavor (as the original recommends) and then cook the liquid with a ball park math approach to achieve a relatively similar salt consistency as soy sauce or fish sauce, which I did by setting a goal of having a beginning salt concentration of 7-ish % which, after reducing by half, will make it around 15-ish %--a trusty salinity for shelf-stable condiment you can hot-pack, bottle and store.

After the sauce is cooked, cooled, and clarified, you add spices to flavor the finished product. While you could add spices while the sauce cooks, bottling them for a long-infusion gives you a focused, intentional infusion. But, as the sauce is meant to be a subtle background accent to things, don't expect a dish you season with it to taste like the spices you use. I used a mix of wild prickly ash berries / Szechuan peppercorns (Zanthoxylum americanum) and regular peppercorns, but I've outlined a few variations that would be good depending on your pantry.

The finished product is a bit like fish sauce in that its a thin, salty, umami condiment to add to things as a fun seasoning. It's meant to be a background flavor though, and with the salt content, you're probably not going to put it in a bottle and shake it on a steak. Here's some places it would be good (just think fish sauce, but not fishy). 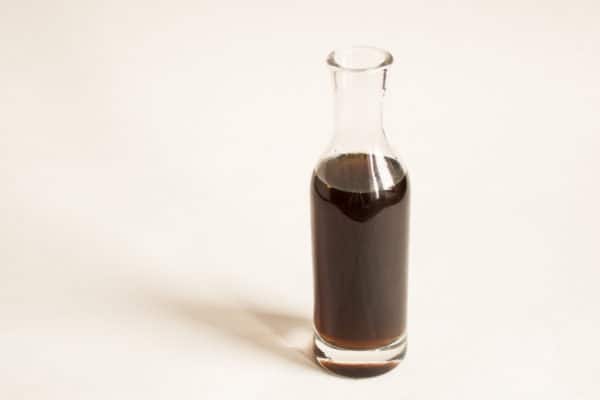 The finished sauce will look dark--you won't notice the color unless it's in front of light. 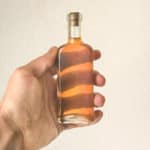 For clarifying the ketchup

Finishing Spice Options (choose one, or roughly 24 grams / 3 Tablespoons of your favorite spices)

Choose your own spice blends for bottling I put three seasoning options in here that will work well, and you can of course make your own. The big thing to remember is more is more here, so add a bunch of spices. You could add the spices at the beginning of cooking with the liquid, but it will be less of a noticeable flavor, and they'll be in the background a bit.  Sugar The sugar is added here as a coloring agent, although the touch of sweetness isn't out of place either. Many things we eat are colored with burnt/caramelized sugar: cola and soda, or anything with "caramel color". It's optional.  To bottle and store in a pantry  To store at room temp, just bring the mixture to a boil and pour into sterilized half pint jars or similar. The salt and touch of acid is enough to ward off anything unpleasant.
« Homegrown Horseradish Cream
Sweet and Sour Wild Cherry, Berry or Grape Syrup »