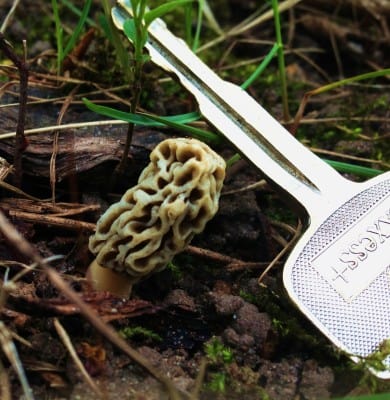 We picked the first morels of 2013 today, It did not go as expected. My good friend Mike and I usually meet up at around 4 am to hunt. Months previous to the snow even melting, we have been planning for this.

Here’s how it goes: we meet in the parking lot, I park my car and look over to mike, each of us passing each other a knowing look. We mean business, and have come to protect our most hallowed of grounds: our motherlode morel patch. The patch is located in a horrible place, and is accessible to locals and dog-walkers. Being such as it is, we have to avoid the people, that’s why it’s important to get there early.

We pick any morels that are mature, inspecting each one and taking plenty of pornographic morel photos. We cover morels that are not ripe and mature with leaves, which lets them grow and reach their apex.

You wouldn’t pick a vegetable before its ripe, since the flavor will not be as good. Mushrooms are no different. Each mushroom picked  is special and unique to us, not only because of their shape, but by who or how they are found. After the hunt, we can recall individual mushrooms we picked, and reminisce about where it was, who cut it, how awesome it was, etc.

Not expecting much yet, we showed up around 9 am this time. There were a couple people walking their dogs about, but nothing suspicious. We headed in a roundabout way to the entrance of the patch, which is a small valley housing two large cottonwood trees. Immediately we both notice something and have to pinch ourselves. The worst possible thing has happened: someone is picking morels from our patch in broad daylight!

After exchanging a colorful, and creative array of expletives, we struggled with what the best course of action might be. We decided to walk past and casually inspect what the picker was doing. 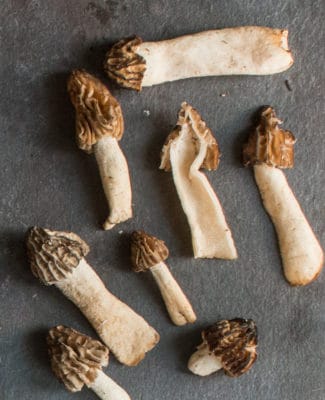 Half-free morels. These are sometimes referred to as peckerheads. Note the longer stem and half-attached cap.

The bottom of her basket was scantily lined with the puniest, most immature morels we had ever seen, some were no bigger than a pen cap. We asked her if it would be good to let them grow a little bit more, she replied, in between breaths out of her mouth:

“Naw, these are just the “peckerhead morels”, they are one of three flushes of morels here, The other kinds of morels will come later.”

Shocked and horrified,we walked past nonchalantly and regrouped at a trash can down the trail where we could still have a vantage point. We discussed the actions of the other picker, it went something like this:

“Peckerheads?” Seriously? She honestly thinks these tiny morels are a different variety than the others?! How on earth could you come to that conclusion?

We watched, sipping coffee as this crazy woman rummaged through the green brambles and long grass of our patch. Eventually we came to the conclusion that we had to break her comfort zone and out-hunt her, something we learned is easier said than done.

Feigning ignorance, we approached her and asked what she was doing. She replied again that she was picking “peckerheads”. Mike started chatting her up to kill time, while I started to scan the area, which, unfortunately was brimming with puny, miniscule morels, which had not even barely had a chance to grow. We hung around and chatted with her for a moment in an attempt to annoy her:

All we wanted to do was annoy the hell out of her so that she would leave. She was hell bent on picking every single puny mushroom though, and responded to all of our questions, happily picking all the while, even going over areas she had already looked over to find additional, puny morels. She even informed us of her storing technique for morels. She claimed they would stay fresh for 6 weeks in the fridge. I don’t suggest you try that.

We began to understand nothing but hunting the baby  morels ourselves would make her leave. She was still rooting around with a vengeance, upturning the grass like some wild pig looking for spring growth.

We didn’t want to, but we had to start picking every one we saw. We hovered around her like vultures, following her when she would move to a different part of the patch. Every time I cut one of these puny, morel babies, I wanted to cry. We had been waiting all year for them to come,  anxious to build more memories tending our patch. Now here we were, forced to cut them down before they even had a chance to get large and delicious.

Eventually I just started lying to annoy her. I got in the habit of yelling stuff like: Oh man here is a HUUUUGE one!!!” “Oh wow another huge one!”. This did get her attention.

She was getting a little ticked now, we were so close to where she was picking as to be obnoxious, throwing any morel picking etiquette we knew to the wind.. One of us would keep asking her questions while the other one walked in front of where she was headed next, attempting to pick all the morels in her path.

Eventually she had had enough, so she said goodbye. Something was wrong though: she didn’t leave! She continued to poke around looking for those peckerheads.  Undeterred, we went back and encircled her, talking a mile a minute about random things to annoy her and picking mushrooms from under her feet. After a few more moments of this, she had finally been defeated, and left, and the mushroom gods were happy.

After a few years, I learned “Peckerhead morel” is a colloquial (common) name used to describe some morchella family mushrooms, but it strictly refers to mushrooms like Verpa bohemica and Morchella punctipes / semilibera, or verpas and half-free morels, respectively. Peckerhead is not the correct common name for common morels. Either way, the Verpa and Morchella semilibera / punctipes are all edible too, with the same precautions as morels.