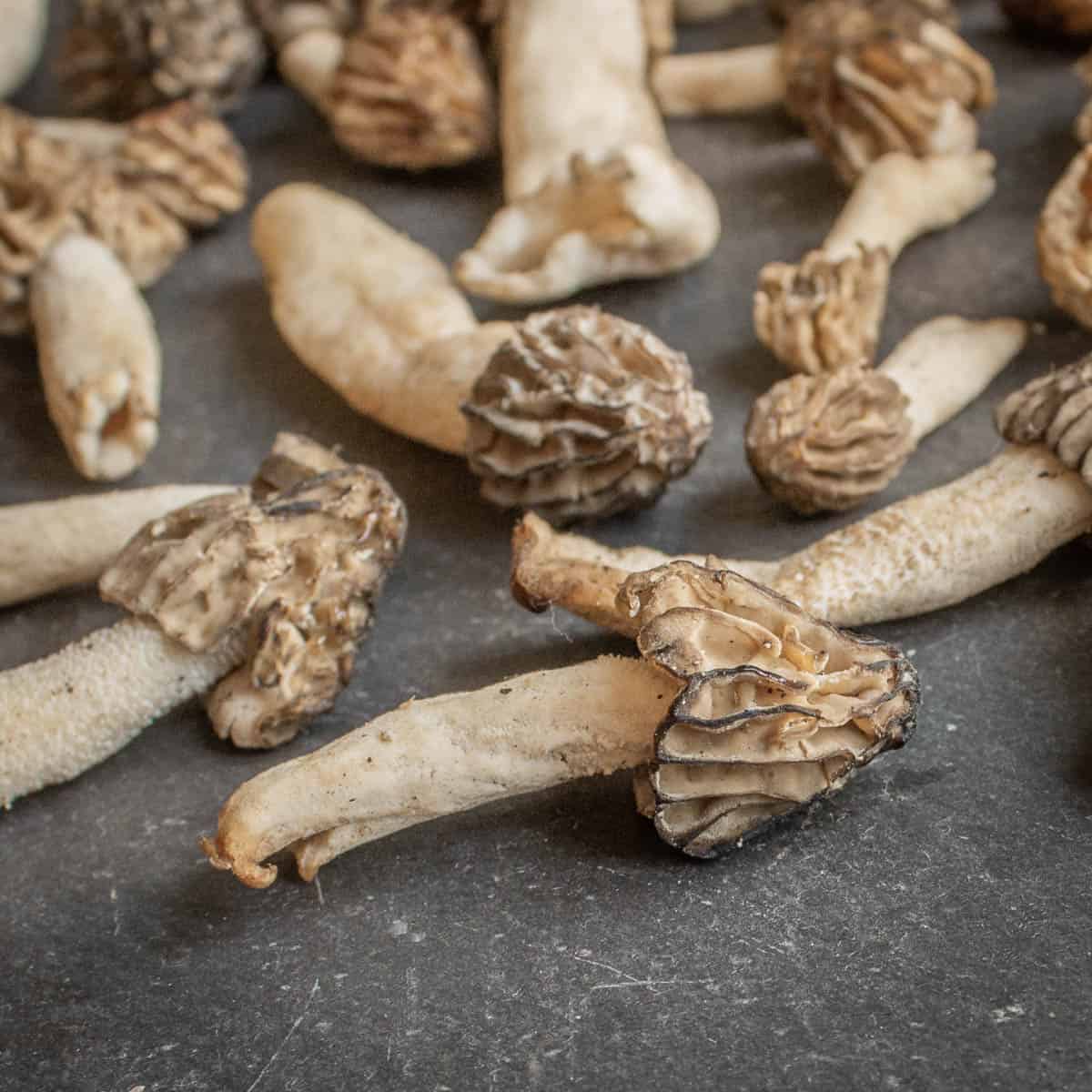 A couple years ago I put a post up called "legend of the peckerhead morel". My friend and I were more than a little pissed off after catching someone rummaging around our patch picking the teeniest tiniest morels, saying that they were known as peckerheads, and that they were good eatin'.

One of the things I said in the post was that there absolutely, positively, wasn't such a thing as a peckerhead mushroom, and like it or not, I was only half-right.

Turns out there is a mushroom colloquially known as the peckerhead morel (they may also be called "dog peckers"-a hilarious common name if there ever was one) but, it isn't a morel as you and I know them.

Hidden in here somewhere is the problem between the specificity of Latin names, and the wide, approachable net cast by common names, but I'm going to try and avoid that. 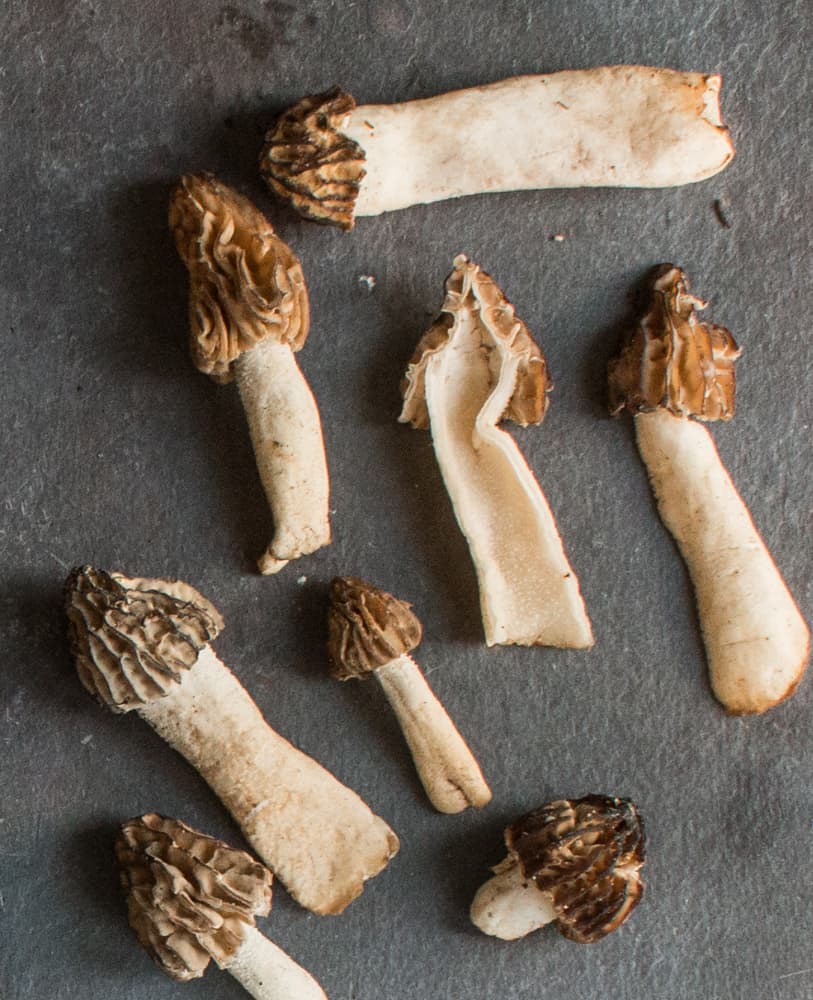 Note how the cap is connected half-way to the stem.

The ol' peckerhead mushroom, as far as I can tell, refers to Morchella punctipes, and populiphila, or what used to be known under the larger umbrella term as Morchella semilebera, which is now, reserved only to species picked in Europe. With their similar shape, a related mushroom called Verpa bohemica likely gets lumped in there too.

Either way, the above morchella names (excluding Verpas) refer to a common name that's actually useful to a degree: the half-free morel. The half-free refers to the fact that the stem is connected to the cap at the top, giving the mushroom a sort of cape looking appearance when cut in half.

One thing I've learned over the years that other hunters have noticed as well is that each year is different with these. Some years I may not see any in a patch, the next year, for whatever reason (rain, temperature, etc) they may seem to be everywhere.

Whether you find enough to take home and cook or not, one thing that's for certain is that when you see these mushrooms, or other mushrooms that are morel look-a-likes, you're in the right habitat. If I see a half free on the side of the trail or in the woods, I stop walking and scour the area for the real deal.

Common morels I pick are typically elm-associate "common" Morchella americana. Half-free morels, like we covered above, could be Morchella punctipes, or others depending on where you live. So, what does that mean? It means they're both morchellacae--the same family, so half-free morels and common morels are both morels, just a little different.

Verpa bohemica, on the other hand, is not as closely related, so its placed in the genus Verpa, instead of Morchella. Just another reason Latin names are a powerful, educational tool. 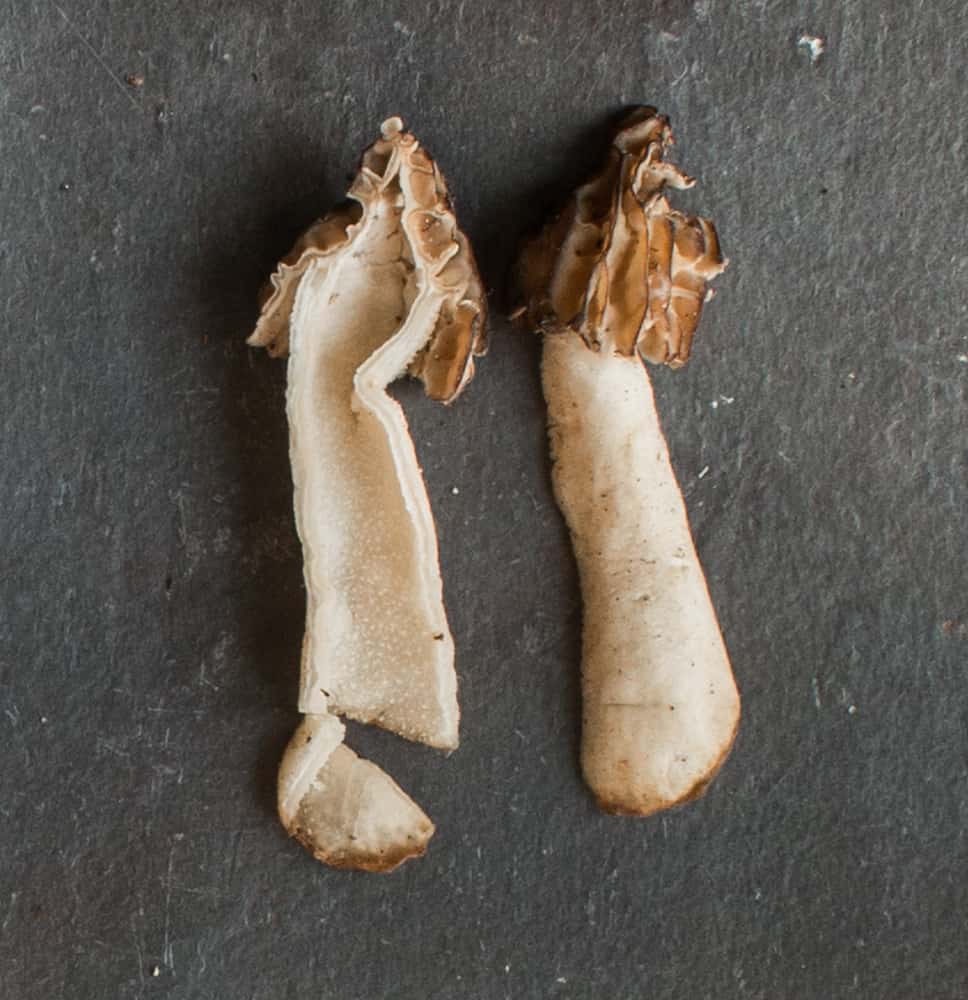 Note the half-connected cap/stem combo. Verpas will have a cap that is completely free.

Getting to point here, the real nugget of info in this post is this: how do you tell the difference between half-free morels and Verpa bohemica? And relating to that, why is it important?

It's always good to know exactly what you're eating when you eat wild mushrooms, secondly, Verpas can cause gastro-intestinal upset in some people, but then again, so can morels.

That being said, the toxicology of Verpa's is also the same as morels, and they shouldn't be regarded as dangerous, just different. Here's the key differences as I see them: 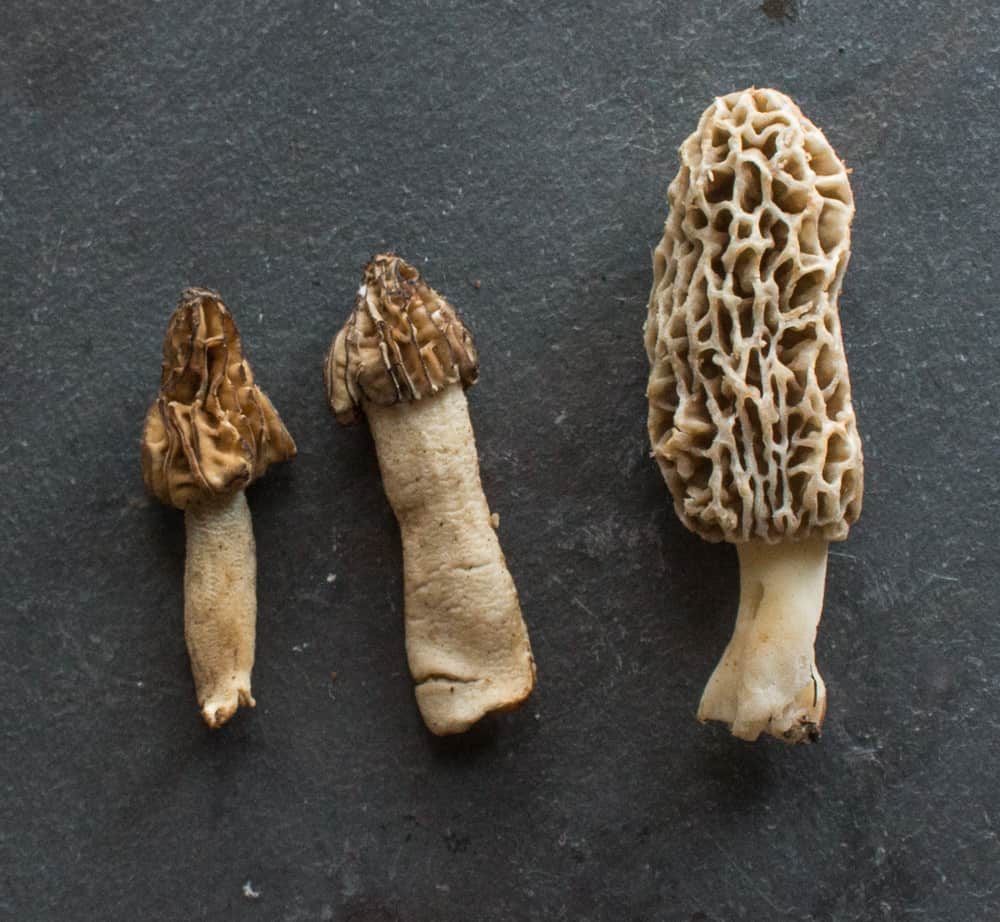 Even if you're brand new to mushroom hunting you should be able to pick out some differences here. On the right is a common morel, on the left, two half-frees.

Since half frees are a true type of morel they're fine to eat. I can tell you that I ate every single one of the half-free morels pictured here, in varying amounts, over the span of a week and had absolutely no issues, in fact, they were really good.

Texture wise they aren't the equal of true, meaty morels and are much more brittle and liable to become crumbs if you put common morels in with them, but, if you find some, try them-they're still technically morels, after all.

If, for some reason you've found enough mushrooms to cook, which can be difficult as they're much more brittle than common morels, you can cook them up as you would any other mushroom, just make sure to cook them thoroughly. 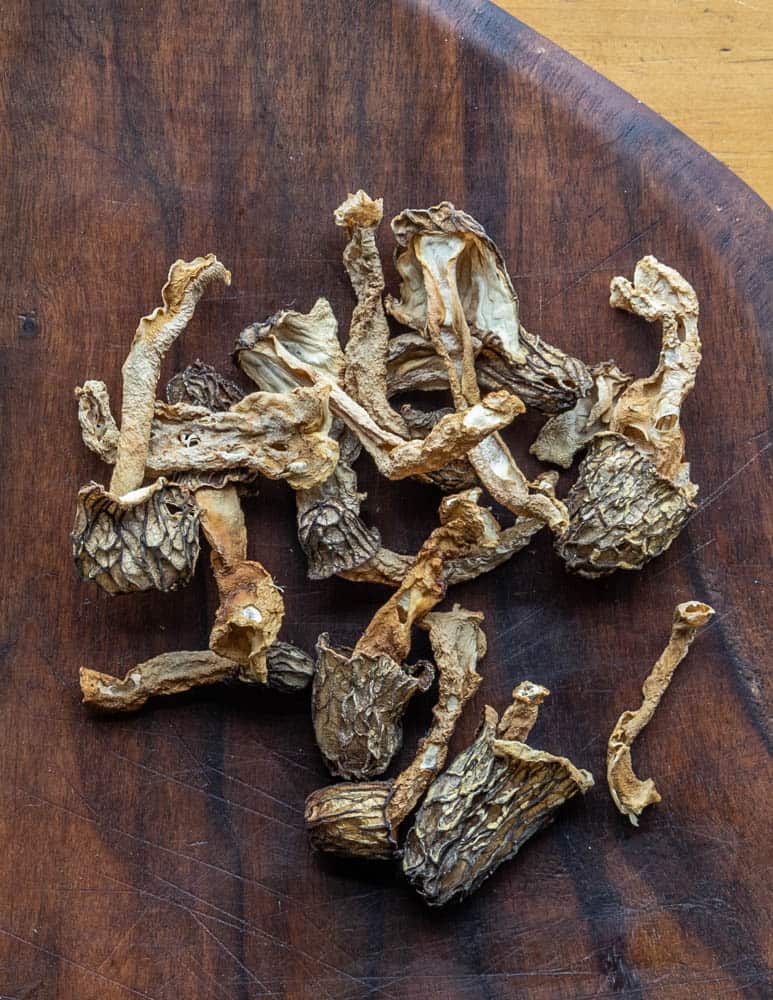 Dried half-free morels won't be as brittle as the fresh mushrooms.

Since they're so brittle, and I can end up with only a few handfuls at a time, I typically dehydrate mine and toss some in with dried morels when I'm using them in a recipe. Just like their more famous cousins, they're good in soup and sauces, and love dairy, especially a splash of cream. 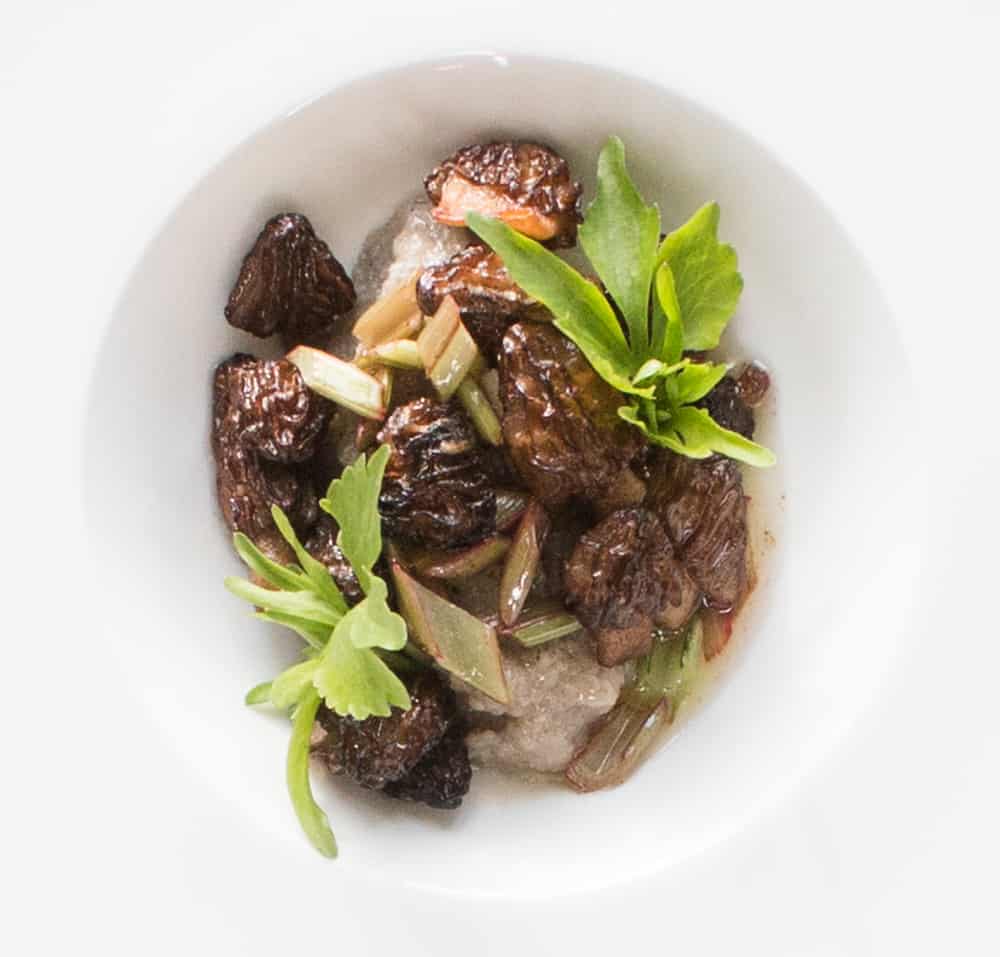 With sochan and wild rice polenta.

Lastly, big thanks to my friend Alex for hooking me up with the mushrooms pictured here. She does forays around the Twin Cities and is a talented mushroom hunter. Hit her up or follow her Facebook page for updates.