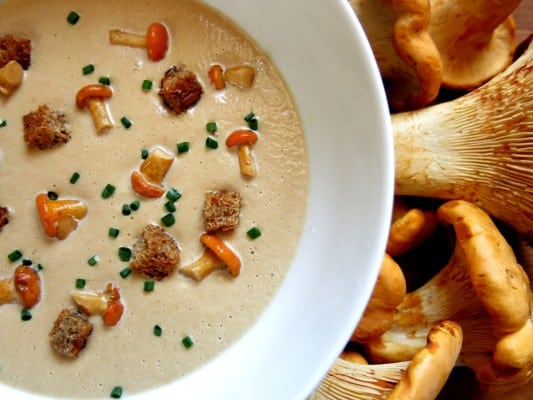 If you are a chanterelle hunter, you will likely have experienced this scenario:

You get home from your successful chanterelle hunt, you start to unload the mushrooms in the kitchen and prepare to clean and process them. You wash the mushrooms briefly if needed, allow them to drain and dry, and then proceed to cut some up into reasonably sized-edible pieces and cook. When you cut some of the larger mushrooms in half, you notice something strange, they are nearly hollow inside, some with little tunnels and discolored bits.

Feeling discouraged you start cutting some of the smaller ones in half as well, to check for similar damage. To your horror, one of the mushrooms has maggots inside of it: moving, writhing, wiggling maggots, each with a puny black dot on it's head. When you expose them from inside their mushroom home, they get agitated and start to writhe and squirm violently, shaking their little maggot tails back and forth and moving around quickly, or scurrying back into a tunnel they have carved within the mushroom. Absolutely disgusted, you hurl the mushroom across the room into the garbage, shouting a flurry of expletives. 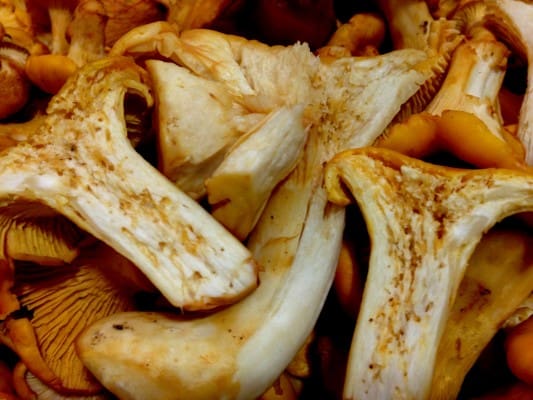 The chanterelles looked great a couple days ago, what happened?!

Wild mushrooms are expensive, pound for pound more expensive than any sort of meat or protein I have ever purchased. When you pay that much for something, as a chef or restauranteur you must squeeze as much money as possible from it. Having a bug or two is absolutely acceptable, and I can tell you, never once in my life has a customer complained of or been squeemish about bug damage in a chanterelle, or any wild mushroom for that matter. Mostly I assume this is due to the public's ignorance of the bugs very existence though.

However, bug damage can get to a point that even I cannot tolerate sometimes. If mushrooms sit in the fridge for a while (especially boletes) the bugs inside them are not dormant; quite the contrary. I have heard tales of the maggots even migrating out of the mushrooms themselves to crawl around in the crisper, as well as having personally witnessed it myself as well with mature chicken of the woods.

This little rant about mushroom bugs has a happy ending though. I was recently trying to figure out how to use some chanterelles on the brink of death. They came in nice enough via air-freight, but Midwest chanterelles have much more bugs than others, such as from the Pacific Northwest. They sat for a day or two, and it seemed the bugs had laid siege to them in the cooler. We had to use and process the chanterelles quickly, but what to do? Their integrity was far too compromised to be simply sauteed, and even though customers still wouldn't know the difference....we would.

Normally I want to use chanterelles whole or thickly sliced, but, to hide their injuries I decided we would make a pureed soup. I wanted to rely on the heaviness of cream, but lighten it by not adding flour. The binder would be the pureed chanterelles themselves as well as cooked down white sweet onion. Try it if you have some bug damaged chantys. 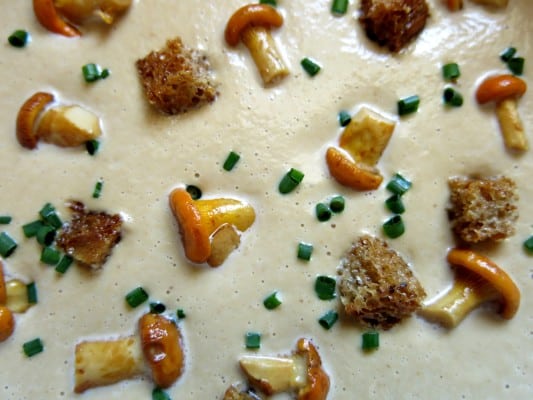 No sir, I'm not seeing any bugs in this soup. Are you? 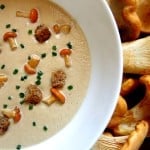 To achieve the smooth consistency of this soup I make sure to add the oil while it's pureeing in the blender. Oil added at the moment when something is being pureed reduces friction, giving you the creamiest result possible. This is a technique you can use anytime you use the blender for sauces, and is a great tip to remember.
« Puffball Mushroom-Cheese Croquettes
Amaranth Spinach, Garlic and Summer Mushrooms »