It's green black walnut season. I don't know how people figured out you could use unripe walnuts in cooking, but I'm sure glad they did, and after you try making fermented green walnut molasses recipe, I think you will be too, even if you don't like the taste of black walnuts cracked from the shell.

Unripe black walnuts are pretty well known in the wild food community, and I think It's a pretty good bet that's mostly due to the popularity of Nocino, the Italian black walnut liquor (Vin de Noix is the French cousin that includes red wine in the maceration, and I actually prefer it to nocino. The recipe for my Vin de Noix is in my book).

In order to really appreciate the green walnut honey, it's useful to understand what things made with unripe walnuts typically taste like.

For both Vin de Noix and Nocino, the process goes like this: cut some green walnuts in half, then add them to a mixture of alcohol and spices, allow it to macerate (sit/marinate) for 30 days, then strain, mix with a sweetener, jar, and age to allow the tannins to soften, which takes a long time-6 months at the very least. Saying that the tannins are an obstacle is an understatement.

After you crack open a bottle of either walnut liquor, you'll have a reasonably mellow tipple. Nocino is firmly in black licorice-Jägermeister territory, Vin de Noix more of a sweet vermouth. But, as anyone who has handled an unripe black walnut knows, black licorice or Jägermeister couldn't be farther from what the young nuts smell like.

Pluck an unripe black walnut from a tree, or even pick one from the ground the tree has rejected (I usually avoid rejected green nuts for culinary purposes as they may be degraded on the inside) and the first thing you'll notice is an strong, toe-curling aroma of green citrus peels. I've smelled a lot of interesting things over the years, but the smell of the green nuts is one by far one of my all-time favorite scents.

Now, I like Nocino, and I probably like Vin de Noix a little more, but I would be lying if I said that every time I open a bottle I'm not a tiny bit disappointed that the exciting aroma of citrus so rich in the green nuts isn't noticeable at all.

I don't know why the aroma changes after a long sleep in alcohol, but it does, and for years I've been trying to figure out a way, any way at all, to capture the scent of the fresh nuts.

Story goes that a few years ago I was reading an old book, and, unfortunately, for the life of me I now can't remember what it was. I think it was from Ireland, or the U.K., but I could be wrong. Either way, in the preserves section, like many old books I've read from the 18-1900's (Housekeeping in Old Virginia being a great one) there were a number of preparations calling for green black walnuts. One of them was "Green Walnut Syrup". I made a note of the name in a file, and forgot about it for a few years.

I didn't leave any notes on how the original syrup was made, but I have syrup macerations down to a science after making mugolio from every unripe part of every species of conifer tree part I can find in my area. If you're not familiar, naturally fermented syrups made from pine cones are a show-stopper, partly because they give you the unique aroma specific to the conifer species used, without the often terribly strong, astringent aftertaste you would get from chewing on a raw pine cone (side note, unripe cones of Pinus siberica and Abies balsamea are so mild you could almost munch on them raw as a snack).

Knowing how incredibly tannic green black walnuts are, I had a hunch that using the same proportions of sugar to unripe black walnuts that I use with pine cones and spruce tips to make mugolio might create a similar product: a thick, non-tannic black walnut syrup, hopefully with a whiff of the citrus aroma I'd been yearning to bottle up and contain since the first time I smelled it.

The finished product will have the taste of green citrus at first, but will mellow with time and develop into something all it's own. The big takeaway of this process, is that this is a way to extract black walnut flavor without having to age out the tannins, and that is pretty darn cool, even if the citrus aroma I've always dreamed of capturing mellows over time. That being said, there will be some tannins in the finished product, but it's nowhere near something like nocino that takes months and months to relax.

The process is exactly the same as for Mugolio. Take your green walnuts, cut them in half, then mix them with twice their weight in good, unbleached sugar, and put them in a container, preferably a glass mason jar so you can watch the show.

After only a day or two, the alchemy begins as the sugar coaxes out what seems an impossible rush of natural water from the green walnuts.

After just a few days, the walnuts will be swimming in liquid, and there will be visible bubbling as the mixture begins to ferment and bubble, pressurizing the contents of the jar and letting out a satisfying hiss when the lid is opened.

After at least 30 days, you scrape out the sugary walnut sludge into a pot, bring it to a boil, then strain, discard the walnuts, and bottle the syrup. Ah Viola.

How to use it

While the flavor is not as intense as mugolio, it's still fun. You could use the finished green walnut molasses anywhere you would use maple syrup, and it loves yogurt and creamy soft cheeses. I've also used it for baking in things like granola, which worked, and gave it a darker color.

There's one thing I'm excited about more than any other though, and it's part of what was pushing me to make this is and taste the finished product a bit early. If you follow me on Instagram and Facebook, you may be familiar with the Ida Graves project-my collaboration with a local distillery in Alexandria Minnesota to create distinctly Midwestern liquors flavored with wild herbs and ingredients I harvest.

This will be our second year making wild spirits, and, as you may have guessed, nocino is one of them. One of my old chefs from Italy would sweeten nocino with white sugar, I've come to prefer maple syrup over the years.

The scheme I'm hatching here though, is that using black walnut honey to flavor nocino might just be the ultimate version: a study in the flavor of black walnuts only the forest can provide. 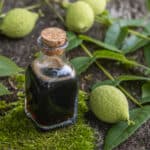