If you don't like cilantro, close your browser right now, back away from the computer slowly and I'll see you next week. If you love cilantro like I do, hang on to your butt, because I have a great one for you.

Green / unripe coriander or cilantro seeds are one of my all-time favorite, hyper-seasonal harvests, and a secret ingredient chefs have been using and requesting from suppliers for years.

Most of the time when we think of cilantro / coriander (Coriandrum sativum), we think of leaves that come in a bunch (these are actually the basal leaves, which are different tasting from the frilly, carrot-esque leaves that creep up the flower stalk). But cilantro is so much more.

Real quick here, I want to go over the leaves for a moment. The basal leaves of cilantro are mild tasting, and, from my experience, preferred by Caucasians. The leaves that creep up the flower stalk have a much more piercing flavor and aroma (I can only assume the intensification of aroma is to attract pollinators as the plant begins the process of flowering and making seeds) and are typically sold by Asian markets and Hmong farmers at the farmers markets I go to.

When I've asked the caucasian growers why they don't sell bolted cilantro like the Hmong farmers, they tell me it's not the right way to sell it. When I ask the Hmong farmers why they don't sell basal leaves, they say basically the same thing. The way I see it, both growers are correct. Cilantro is great no matter when it's harvested, and both growers are catering to their respective markets. The cultural predilections for leaves of differing ages/flavors is definitely a thing here, and it's an interesting curiosity that makes me chuckle.

Personally, I use both leaves depending on the age of the plants and how much of the herb I need, but, if I was pressed, I'd say I prefer the aggressive taste of maturing cilantro leaves from the flower stalks. That being said, it's more difficult to get the smaller, frilly leaves en-masse than the abundant basal leaves that come with their bonus of tender stems.

After the plant makes flowers (also delicious) it begins making seeds, which, after maturing and drying, are the bright-tasting, citrusy spice coriander we all know and love.

Like so many other herbs (wild Szechuan peppercorns being a perfect example) if you harvest the seeds unripe and green, before the seeds have matured and dried, you can cook with them, and they're fantastic.

For a little technical clarification here, when I say green coriander or unripe coriander seeds, I'm not actually talking about the seeds. What the aroma is concentrated in, and what you will use in cooking, are the aromatic green husks surrounding the unripe seed.

The seeds have an intense, floral aroma that's a bit like a cross between conventional dried coriander seed and cilantro, but it's really something else. The bright aroma and flavor are intense, almost electric tasting to me, and have a similar piercing aroma in the way that fresh lovage does. Just handling a few unripe seeds will leave the aroma on your hands, and fill a room with their scent.

Some people may find the seeds slightly bitter eating them out of hand, but, remember that you wouldn't eat a sprig of rosemary raw either. Any hint of bitterness will dissipate when the seeds are combined with other ingredients, all you'll notice is a bright, aromatic pop here and there.

Unripe coriander seeds aren't as easy to use as buying a bunch of cilantro, but you only need a few of them to flavor a dish. As they're round, they naturally want to roll all over your cutting board, so it's helpful to crush them with the back of a chef's knife or other flat blade (a bench knife can work) or crush them up in a molcajete (a smooth mortar and pestle is not as efficient). After you mush the seeds and husks up a bit, you can chop them roughly and add them to whatever you like.

Fresh seeds, like cilantro leaves, should be stored in the fridge, but, unlike the delicate leaves, they can last for weeks. To preserve them you can put the green seeds in a jar in the freezer, which is probably the best way to keep their fresh flavor, but they can also be fermented in brine to preserve them, which gives a slightly different end product.

Whatever you do, I hope you give green coriander a try. The small amount of work it takes to gather them is well worth the effort. 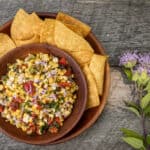 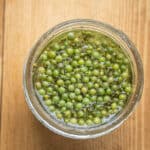