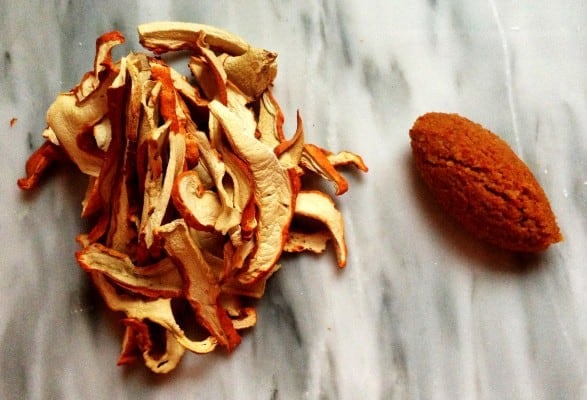 One of the simplest, and most approachable recipes. A duxelles is a classic way of using mushrooms, it involves cooking a bit of shallot (or ramps!) in a pan, then adding mushrooms and cooking them down in their own liquid the exude, adding some herbs, then chopping them finely.

As one of the most delightful things about wild mushrooms is the juice they give off, cooking them down in their own juice makes them into a sort of concentrate, a rich addition to a stuffing, gravy, or sauce of any kind. However, for the home cook it can seem cost prohibitive to make, and it may seem like an odd ingredient just have laying around, unless you know tricks and tips for using it to highlight how special it is. The recipe I've outlined has some shortcuts within it which will make it way easier for home cooking.

One of the best things about duxelles is that it can be made with dried mushrooms. As dried mushrooms flavors are more concentrated and pungent than fresh, this means that a duxelles made from dried mushroom is a powerful flavoring agent indeed. The one I made for this example is from lobster mushrooms, which when dried have a strong aroma of shrimp and shellfish, as well as the ability to color anything they are cooked with yellow like saffron.

Mushrooms, like every other food known to man, can be parasitized by other creatures in nature. Working at restaurants that purchase foraged mushrooms has shown me that nothing is ever wasted. Those buggy chanterelles? They will be put through the meat grinder, made into broth, strained and sold in the form of a delicious chanterelle consomme, for 10$ a bowl. Those giant porcini stems littered with tiny holes? They will be ground into powder and used as a crust for fish. Drying mushrooms is a technique of resourcefulness, and a very useful one.

Here are some ways I like to use them: