After the morels, the first mushrooms I start to notice fruiting everywhere in Minnesota are white crown corals.

The trick here is to find preparations that keep their integrity as much as possible. Trying to fry them crisp took me a couple different tries to really get it right, they are really finicky. If the corals are fried in a very light dusting or dredge, the mushroom body turns black, which is a bit off-putting, although they still taste good.

When fried in a more heavy batter, they almost disappear into it and it’s impossible to distinguish their texture. I had to figure out a way to possibly preserve their color, and at the same time keep their textural integrity. In hindsight, tempura would be a great way to fry these too.

I experimented with a number of different breading/battering techniques until I got it right, here are some I played with:

Mushroom keeps color and doesn’t darken, but breading is too heavy

2. Dipped only in flour and fried:

Mushroom is nice and crisp, giving off a pleasant flavor, but turns black in the pan

3. Dipped in a light beer batter, then in flour and deep fried:

Batter takes too long to cook, by the time the batter is golden brown, the mushroom is too wilted and overcooked to taste like anything

4. Dipped in flour, then egg and fried:

5. Dipped in flour, then egg thinned with water,  then floured and fried

This was the best I found. Loosening the egg with some water allowed the coating to be lighter and not absorb so much flour.

As for the condiment here, I have been picking the chive blossoms from a large bush in the backyard religiously. Since both the green oniony stem and the pretty pink blossoms can both be used, I show them in two different ways here. The chives are made into an oniony mayonnaise, The blossoms are simply picked fresh off of the plant, and sprinkled on for punchy, onion kick. 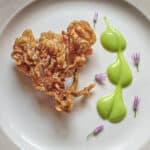