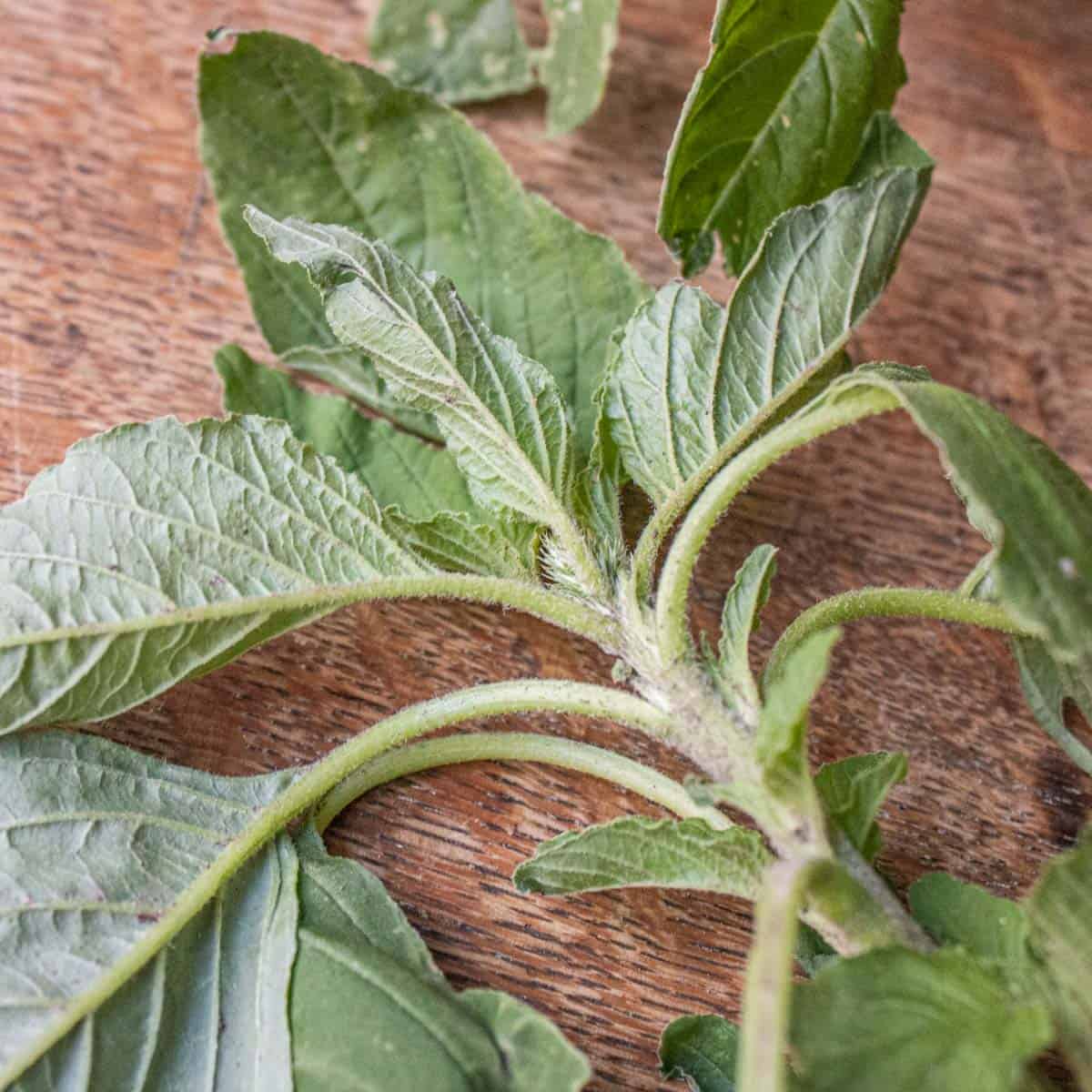 For me, amaranth is the king of greens to pick in the mid to late summer.

Come July, the lamb’s quarter at the farm is probably wanting to go to see soon, and unless I continually cut it down, it will. I still usually get a good blend of greens until early August, but during that time the amaranth really starts to do the lions share of the work. In other words, I eat more of it. 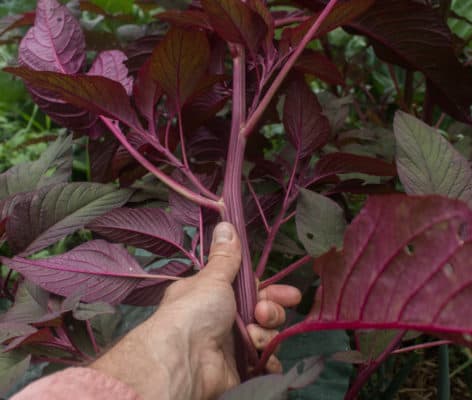 Burgundy amaranth rates a close second to green amaranth in the kitchen for me. 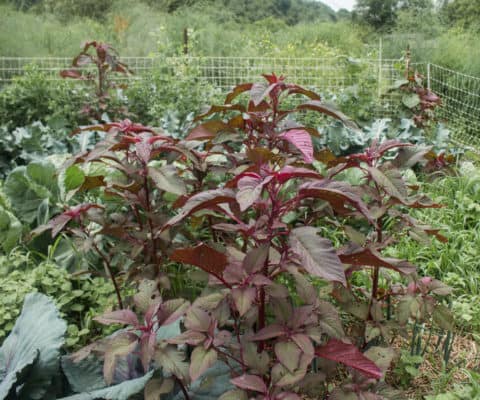 Amaranth will grow tall and fast, especially burgundy amaranth, one of my favorite salad garnishes

Unfortunately, for farmers like my father, the later maturity of amaranth means some of the species can be a serious pain in the ass for farmers, especially Amaranthus palmerii. For this post, I’m specifically referring to Amranthus retroflexus, or common green amaranth, which I usually pick from the areas around a garden of potatoes, or on the edges of woods and fields. There’s alot of species though, and a range of beautiful purples and greens with this plant. There’s also it’s hot cousin Lamb’s quarter, which matures slightly earlier where I live, both are among the best wild greens I know to eat.

Turn your yard into a grocery store

A lot of Amaranthus are ornamental, which means you can have your yard, and eat it too. If you plant it, know that you will *need* to eat it since it can be an aggressive grower, but once you taste tender sauteed amaranth and it’s stems cooked with garlic, chili, lemon and olive oil, there won’t be anything to worry about. 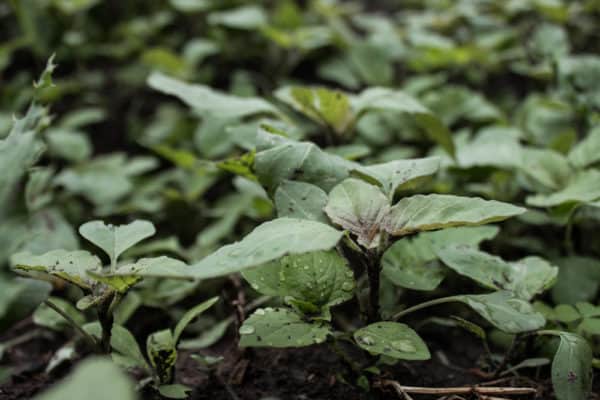 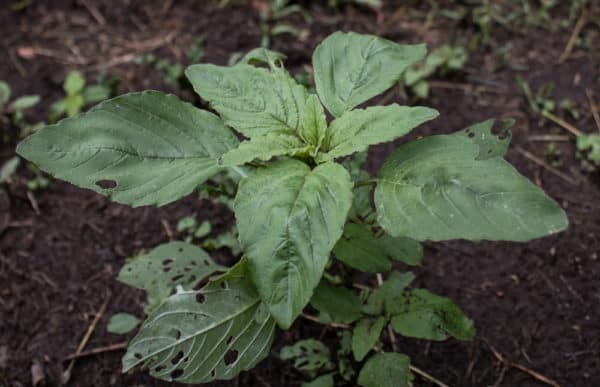 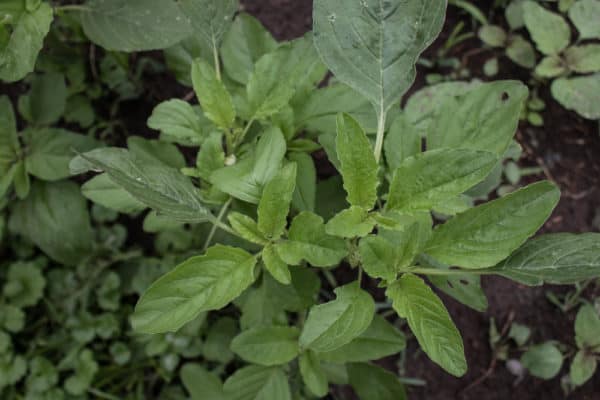 from above, the leaves vaguely resemble potatoes, make sure to not confuse the two.

Unlike other typical garden weeds I pick a lot of (lamb’s quarter, galinsoga, nettles) amaranth is beefy: it has some serious weight to it. The stem is larger, and develops more volume earlier than it’s cousin Lamb’s Quarter.
That weight is a boon for preparations of cooked greens, but not so much for preparations where you would eat it raw. I love raw lamb’s quarter, but if I’m going to serve amaranth raw, it absolutely needs to be only the most tender portions of the plant, or the clouches as I call them, the youngest growing tips you can find, and even then it will usually be mixed with other greens to ensure a tender variety.

I use amaranth in a blend of greens if I’m going to serve it raw.

Multiple Harvests from one plant

If you have amaranth in your garden or field, you can get multiple harvests from cutting it down, just like lamb’s quarter. It almost seems like the more I cut them, the more they grow. I try to do everything I can to prevent the plants from going to seed each year, so I can get as many meals out of it as possible.

The picture below shows two things: 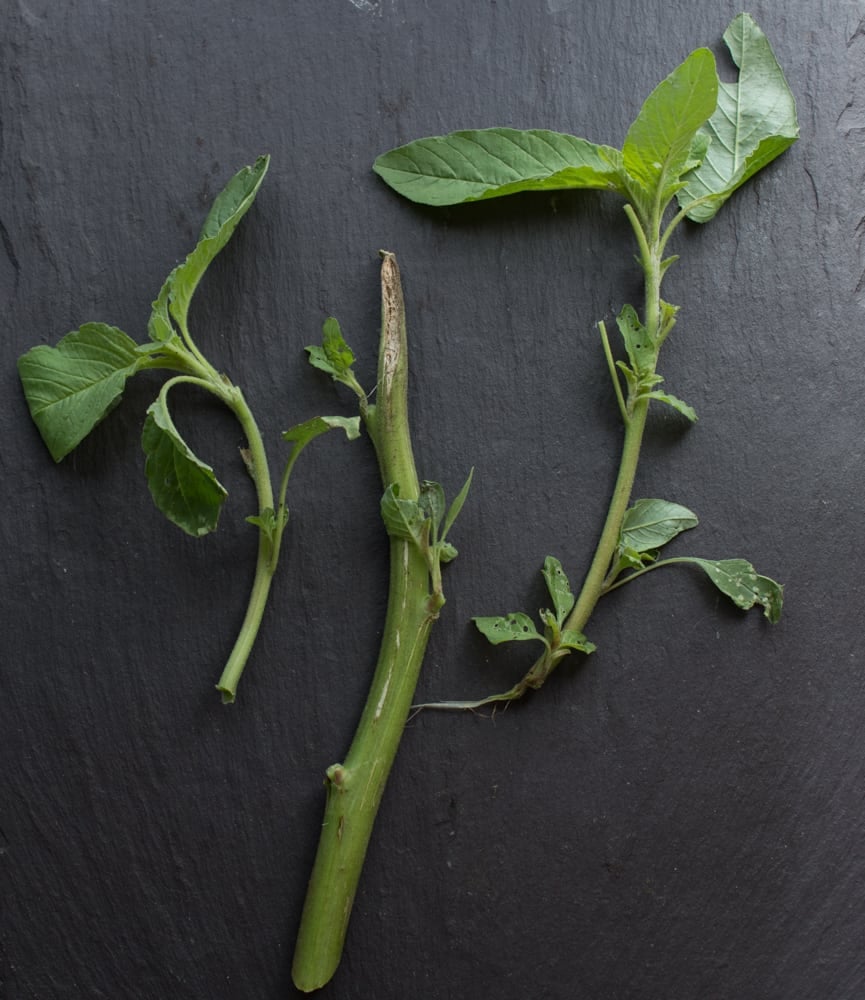 Removing the clouches, or young growing tips from a woody stalk. This plant I had already harvested from once before, which helped to give me a second harvest.

Treat amaranth like any other green you would cook like nettles or spinach. My favorite part is the big, tender stems, which make it more like a vegetable than a green.

After picking, refresh the greens and stalks in a sink of cold water for 15 minutes, longer if they’ve wilted and sat in the sun. When the plants are refreshed and perky, drain them thoroughly with a spin mixer or by rolling up in a beech towel until dry, then refrigerate. I like to store my amaranth in a paper grocery bag with a damp cloth on top, but if I’m pressed for space or need quick meals, I’ll blanch it in salted water, ball it up, squeeze the liquid out and refrigerate the balls of greens, just like they do in Italy.

Young amaranth tops can be tossed in a pan whole. With a medium aged amaranth plant, you really get 4 vegetables in one: a thick but tender stem, a delicious tender top, greens for wilting, and portions of stem that don’t have to be peeled before cooking, along with the seeds I’ll cover lightly afterwords. Of course, you don’t *have* to think of all the different parts while you’re cooking it, but it can help you understand what went wrong if you have a meal of it that has tough portions.
Basically, what it really comes down to is this: below I’ve separated out the parts of the plant that are tender as they are from those parts of the plant that need help to become tender. Here’s the four green parts, as I see them. 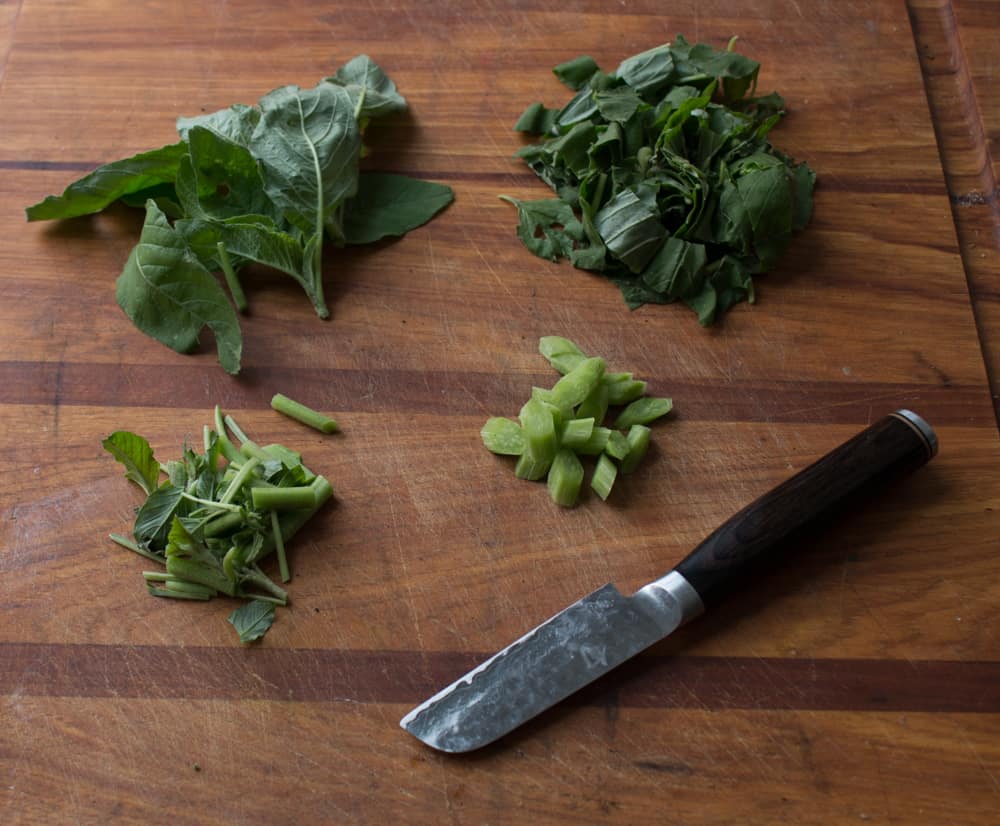 I think it’s helpful to understand the different parts of the plant, since they can cook slightly different, but for all intents and purposes, if the whole plant is tender you can just slice it all up, leaving larger lengths as you get up to the top of the plant. After the amaranth is cut you can throw it all in the pan and cook it. If your plants are older, you may have to peel the bottom portion of the stalk, but that’s only as the plant is mature, from my experience.

Lately I’ve been really happy to see amaranth being sold at local farmers markets. But, there’s a double edged sword here. The farmers that grow amaranth need money, and I’m happy to support them, however, they always harvest the amaranth later than I would ever pick it, since they get more volume that way. Sold mature, or near the stage where it will begin to develop flower stalks, amaranth gets tough, especially the stems. 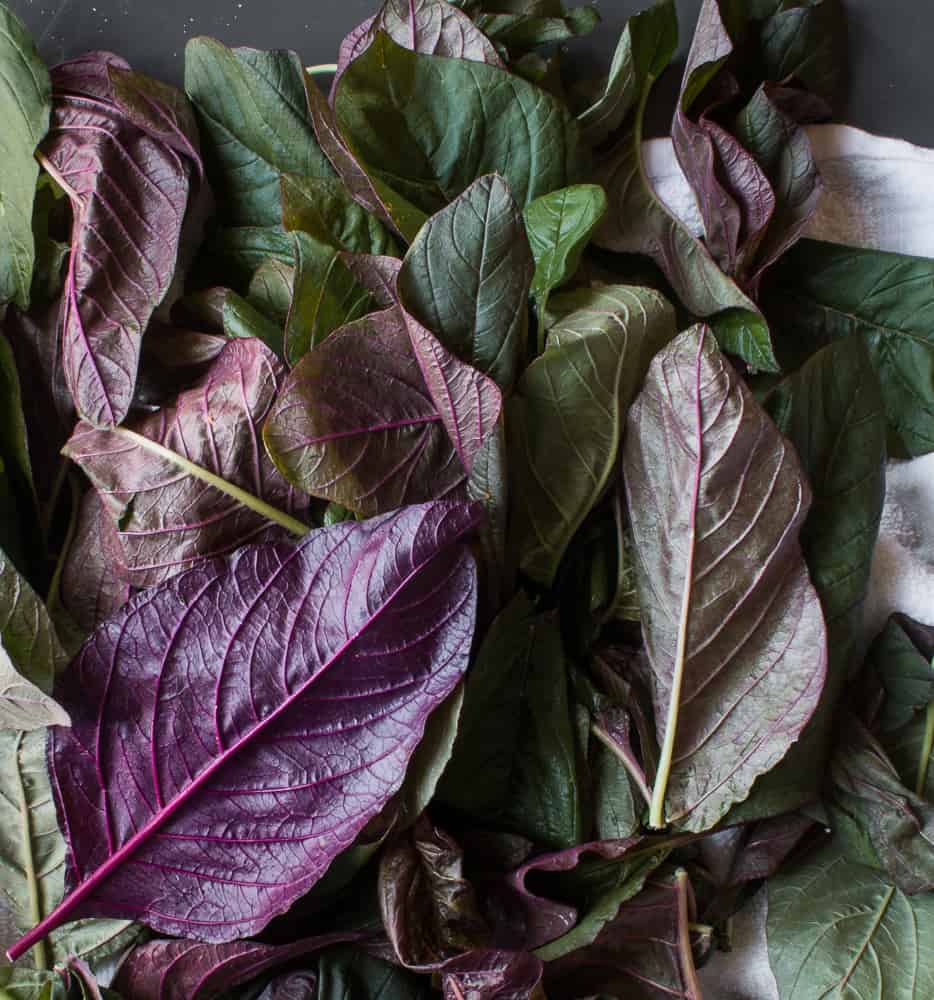 Mature amaranth, from a farmers market. It’s a hybrid of burdundy and green. Note the pronounced stems in the larger leaves: this will need to be cooked to be palatable, but it will still be great.

There is no serving older amaranth raw for me, and if I cook it, I have to strip the stems out of nearly every mature leaf: a world of difference from the tender plants I pick in the garden where I can throw the whole plant into a pan and have it be tender, stem and all. Please, support farmers that sell amaranth and interesting plants (look for Asian farmers here, since they generally have the best appreciation for these things) but if you see a farmer selling older, tough amaranthy, you might tell him you’d pay the same amount for a lesser amount of greens if they were young. 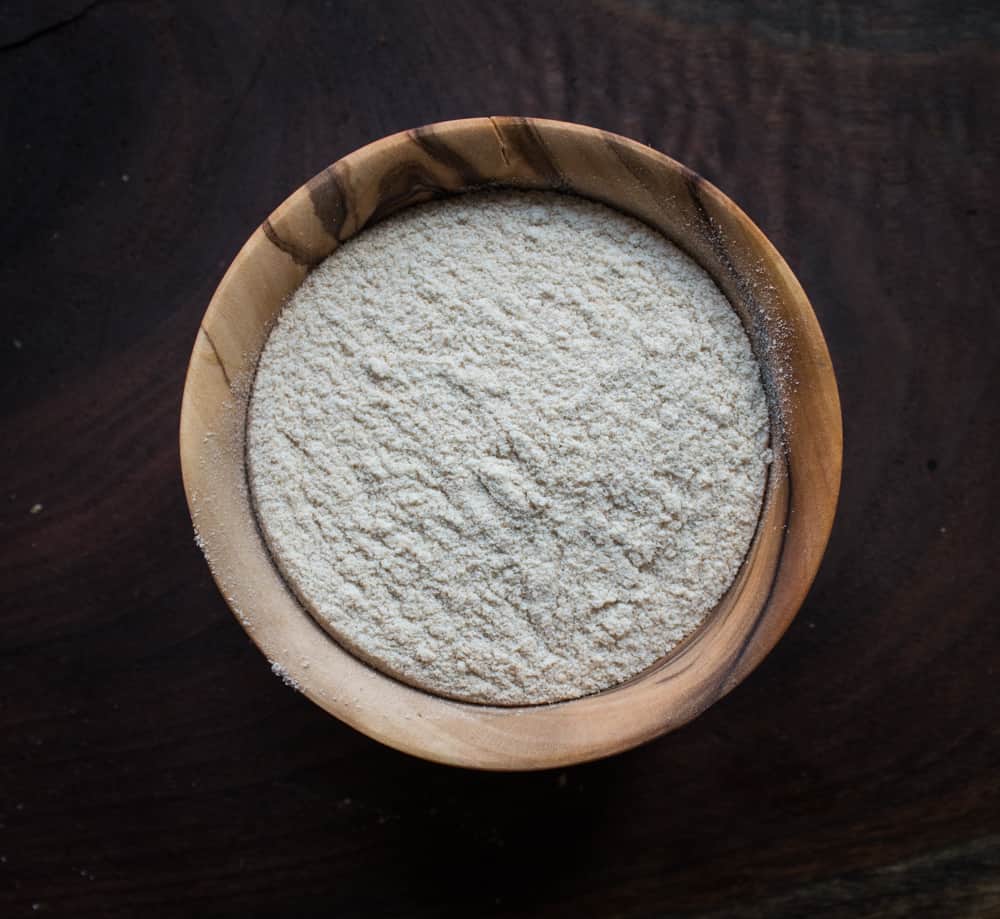 Amaranth seeds are found in the large seed heads the plants shoot up at the end of the season. You can definitely harvest the seeds, but it involves winnowing to separate them from the chaff, and it’s a lot of work. With amaranth flour and seeds available from companies like Bobs Red Mill, for me it really isn’t worth it to try and winnow my own, since the opportunity cost is spending more time picking other things in the fall, like apples. You could, of course save the seed heads, dry them in a garage or something and remove the seeds during the Winter, but again, it’s a lot of work. I’ll get my amaranth flour from the coop. 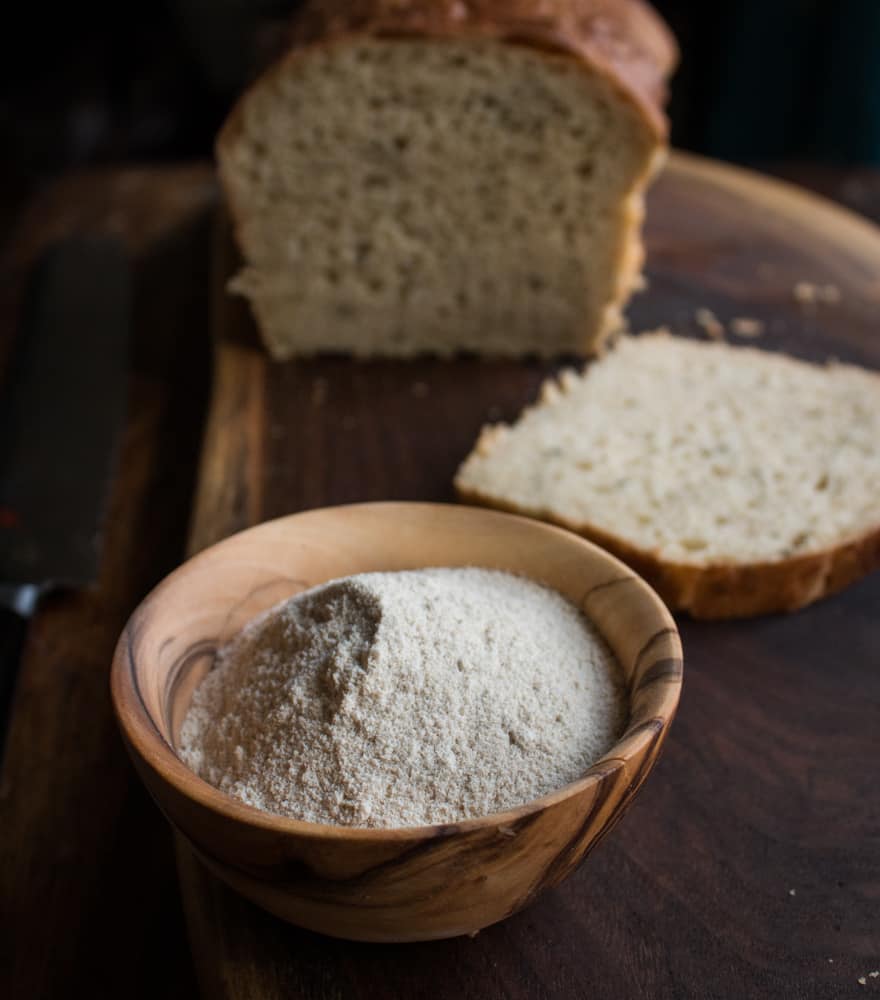 Saag paneer is a fantastic curry that traditionally uses amaranth along with a type of ricotta cheese.

Simple wilted amaranth with (or without) summer mushrooms