Chanterelle pudding is an old-school mushroom recipe from the one and only Richard Olney, who was one of the defining authors of modern French Cuisine in the era of Julia Child and James Beard.

In his most well-known book, Simple French Food, Olney shares a recipe for "mushroom pudding", a sort of side dish or casserole made by mixing a healthy amount of chopped mushrooms with bechamel, eggs and a little parmesan cheese.

It's a rich, filling side dish, and a great way to use up mushrooms of any kind that you have. I used chanterelles, but other mushrooms, especially chunky ones like porcini would be great too.

You could also use wild mushroom duxelles or frozen mushrooms. Serve as a side dish along with a green salad dressed with olive oil and lemon or wilted greens.

I used chanterelle mushrooms because they were what I had at the time, but this is the kind of wild mushroom recipe where many different types will work. Here's a few that'll be good, with some tips.

There's lots of ways you can switch this up and tweak the flavor. 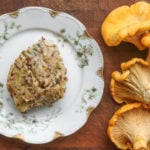