When I tell people I like to use burdock root, the first response I usually get is:

When I dug my first burdock and cooked it (I source them for the Salt Cellar since I don't have an army of foragers at my disposal, yet) I didn't know that it was a typical ingredient in sushi. All I knew was that it was a root that tastes a bit like oysters, or something similar, it's a bit hard to describe.

I approached the burdock how I do most food, through a lens of classical European technique. What I found is a root that requires long cooking, but develops a very cool flavor as a reward.

Since local and wild burdock roots I've worked with are generally small, I knew it would be difficult to use on a large scale unless I found a way to amplify their flavor.

One of the best mediums of transferring flavors I know of is cooking something in a liquid or broth. Following that, cream is a neutral tasting liquid that loves to take on flavors of things it's cooked with. That knowledge, as well as the request of a photographer friend of mine for a cook book recipe contribution containing less than 13 ingredients, was how this recipe was born. (I'll keep you updated on the cookbook, don't worry) 🙂

Mashed potatoes are great in their simplicity They're a blank canvas for introducing other flavors. Adding the flavor of burdock takes a little extra effort, but it's worth it. I guarantee you, once you taste them you'll have a new weapon in your arsenal.

The technique I use here of pureeing a flavorful vegetable in cream, passing it through a sieve, and then adding the flavored cream to the potatoes is a great trick to know too too, since burdock is one of many many things you could do this with. Celery root, rutabaga and turnips are good examples too (the exception being scarlet turnips, since their color becomes unappealing when pureed).

One last thing. Don't write this recipe off because you can't find any burdock at a grocery store, or don't want to go through the painstaking process of digging some yourself. Gobo root is identical in flavor, and can be found at any Asian market I know of. It's cheap too, and larger in width, which means it's much less putsy to peel. Try it sometime. 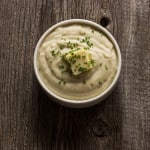 These are excellent with meat and fish. At The Salt Cellar, I serve a variation of this with our sea scallops-a play on the burdock's "oyster" flavor.
« Bison Stew With Barley and Mushrooms
The Fragrant Trumpet: Craterellus Cinereus and Foetidus »