When I brought my first fried chicken mushrooms home from the coop, after the basic "fry in pan with butter until brown and add salt" method, this is what I made, It's simple, and a good example of my style of cooking: interesting, high quality ingredients, cooked with classical technique.

I remembered my foraging buddy Dan mentioning that Wild Man Steve Brill recommended cooking fried chicken mushrooms in soup. After digesting Steve Brill's notes about them online, and being sightly unimpressed with how they came out sauteed, I thought I'd give the mushrooms a shot in a wet method, like a stew or soup.

I made a fun variation on the ol' beef 'n' barley using bison and black barley-a nice, stick-to-your-ribs-in-cold-weather kinda dish. The fried chicken mushrooms thickened the soup very subtly, and it was great. If I have some on my hands any time soon, I'll be cooking them in the same way.

As far as the thickening quality goes, honey mushrooms are related to fried chicken mushrooms, and I knew from experience that honeys have a natural thickening property, something I noticed after I pickled a bunch en masse a couple years back. They gave off a sort of mucilage that was exacerbated by the low amount of liquid involved in pickling via mason jar, when I opened the jars it was like they were covered in snot.

Once I read that Steve Brill said the Lyophyllum/fried chicken mushrooms would thicken a soup, I knew they were possessing the same effect I had experienced before with the honeys, which I had thought of as kind of a draw back to cooking with Armillaria/honey mushroom species. I hadn't ever thought of using the property to thicken a soup though, so props to Steve Brill. 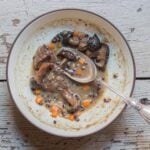 I was experimenting with the thickening qualities of the fried chicken mushrooms here by using gluten free wild rice flour when browning the meat, you could easily substitute all purpose flour, if you want. Wild rice flour adds a nice, subtle taste to a broth or stew though, without making it gummy. If you want to gild the lily, serve a little sour cream mixed with chopped dill with something like this.
« Fried Chicken Mushrooms
Burdock Mashed Potatoes »