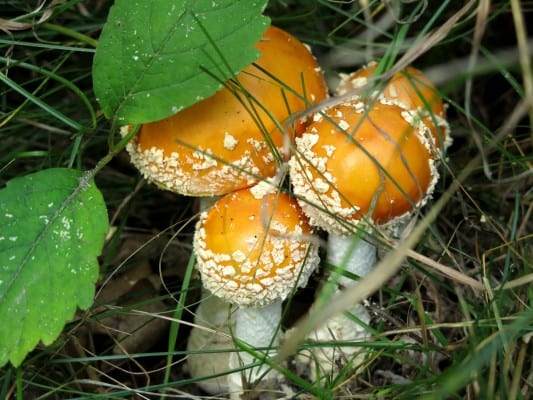 The most famous mushroom of all. Volumes have been written about it, and it’s subtly pervaded Anglo Saxon culture. If you have ever seen a lawn with garden gnomes, watched Alice in Wonderland, Disney’s Fantasia, played Super Mario Brothers, or been to a thrift store that sells kitschy trinkets, you’ve seen it. It is Amanita muscaria, also known as the fly agaric, and it is a bit of a moot point in the mycological world, as well as others. Claims have been made that it’s the inspiration for Santa Claus, thousand year old spiritual texts, even the origin of Christianity via it’s involvement in ancient fertility religions. In Eastern Europe it is a symbol of good luck and the yuletide. All in all it is an impressive mushroom to behold should you see it, I have come across specimens with caps nearly a foot long in circumference. I find it rarely in Minnesota, our midwest version is different from the classic European one in that it is bright yellow instead of red.

The name is derived from this mushrooms ability to act as a fly killer. Supposedly if the mushroom is crushed and placed in milk, it will attract flies and kill them. This is reflected in some of it’s names: “tue mouche” (fly killer-French), “mukhomor” (fly killer-Russian), “fliegenpilz” (fly mushroom-German). Accounts of it’s fly killing success vary however, some say it just makes flies buzz around like they’re drunk.

The fly agaric is a conundrum because it is poisonous and edible and the same time. Most field guides even say that it can be fatal. There is only one death that I see popping up again and again. Basically a 300lb Italian count ate something in the neighborhood of  3 dozen mushrooms and died while he was visiting the states. He also had a friend who ate many as well, who fell ill, went to the hospital, and recovered.  Original Count De Vecchi Article.  Even so, many people eat muscaria, and most say it is quite good. The mushroom must be boiled in water to remove the toxins before eating though.

Amanita Muscaria is not “poisonous” per se, rather it is a hallucinogen/narcotic. When you eat it dried, freshly cooked, or drink water it has been cooked in, you will become intoxicated, or possibly just get sick and vomit all over the place. The intoxication is often compared to being incredibly drunk, as opposed to a more cerebral experience talked about when ingesting psilocybin mushrooms, like those that indigenous South American populations ate to gain visions and visit the spirit world. The variety we have in Minnesota should be Amanita variation guesowii, known to frequent the upper Midwest and identifiable by it’s orange cap as opposed to the traditionally known red capped variety.

Some that ingest this mushroom for narcotic purposes say that the yellow muscaria are not as powerful as the red ones, others also say that it will only make you sick. I can tell you that I do not doubt it’s narcotic effect at all. The reason for this is that I know from personal experience dealing with alternative medicine stores in Minnesota that muscaria is hands down the fastest selling product offered, moving out as quick as it comes in. I assume people sit on waiting lists for most of the year until it’s arrival in the late summer.

Sale of muscaria is legal, for now, and probably will remain that way unless someone cries foul. I don’t see a problem with it being sold in this way. As far as amanitas go, this is the most easily identifiable, although there is the possibility of confusing it with with amanita flaviconia, (also known as “yellow patches”), which has an unknown edibility. However, amanita flaviconia is about 1/10th of the size of muscaria, and also fruits solitary from my experience, where muscaria will be found in awe inspiring fruitings of massive size, with many mushrooms being found. In addition, I only see muscaria under young aspen. Yellow patches I see in deciduous forest with many oaks, typically around my chanterelle patches. Confusing amanita pantherina is considered a danger as well, since it is much, much more powerful than muscaria, however it’s cap is brown, not yellow. 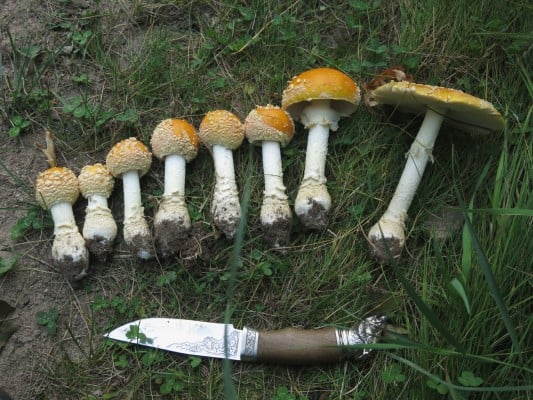 This knife has a 5inch blade, these are large mushrooms, amanita flaviconia is never this size.

Mostly we hear about Siberian tribes eating the muscaria, a certain group called the Koryaks, a nomadic group that rely on reindeer as part of their culture. Basically the males eat the mushrooms and get very intoxicated. However, if the mushrooms are cooked and boiled in water beforehand, the toxins are extracted, and the mushrooms are perfectly safe to eat. The funky part about the ibotenic acid in muscaria mushrooms(what makes you become intoxicated) is that your body will not absorb all of it, and that it is passed through your urine. Apparently the urine could be used up to 5-6 times, which is a strange thought. Here is the account from R. Gordon Wasson, an amateur mycologist who wrote quite a book regarding muscaria:

“The Russians who trade with them (Koryak – a tribe on the Kamchatka peninsula), carry thither a kind of mushrooms, called in the Russian tongue, Muchumor, which they exchange for Squirils, Fox, Hermin, Sable, and other Furs. Those who are rich among them lay up large provisions of these mushrooms, for the winter. When they make feast, they pour water upon some of these Mushrooms and boil them. They then drink the liquor, which intoxicates them; The poorer sort who cannot afford to lay in a store of these mushrooms, post themselves on these occasions, round the huts of the rich and watch the opportunity of the guests comind down to make water. And then hold a wooden bowl to receive the urine which they drink off greedily, as having still some virtue of the mushroom in it and by this way they also get drunk.”

From Soma: Divine Mushroom of Immortality 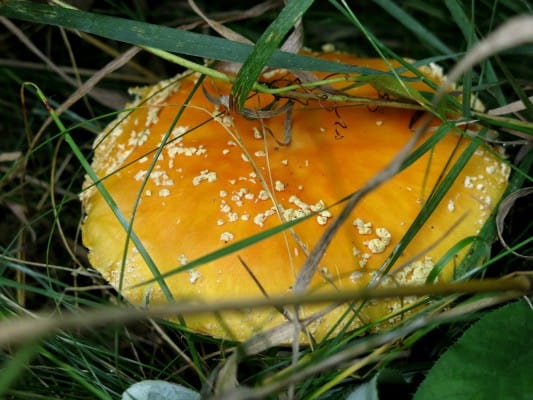 Hiding in the grass under young aspen

With my Scandinavian heritage, I love all things viking. When I was in highschool I remember hearing people talk about viking warriors ingesting hallucinogenic mushrooms before entering battle, which at the time I assumed must be psilocybin containing mushrooms (your typical “shrooms”).  R.G Wasson claims they were eating muscaria. This would seem to make sense, since eating it can give a person vastly increased strength and a feeling of fearlessness, so it is said. Imagining a viking berserker charging at you, high as a giraffe’s butt, is pretty funny.

“No one who discusses the fly agaric in Europe can ignore the debate that has been carried on for almost two centuries in Scandinavia on this issue. First Samuel Odman in 1784 and then Frederik Christian Schubeler in 1886 propounded the thesis that those Viking warriors knows as ‘beserks’ ate the fly-agaric before they ‘went beserk’; in short, that ‘beserk-raging’ was deliberately caused by the ingestion of our spotted amanita.”

From Soma: Divine Mushroom of Immortality

I’m not saying go out and eat muscaria. I am saying I’ve eaten a number of them, and I haven’t had any problems, as long as they’re boiled first in plenty of water. I don’t eat these often, they’re more of a novelty. When I first ate them I was a little nervous, I mean its an Amanita after all, the family home to the most deadly mushrooms we know!

To eat them you will need to cook them in salted water for 15 minutes or so until they’re completely wilted and cooked through. After this, rinse the mushrooms lightly with cool water and then drain on some paper towels. The reason for rinsing the mushrooms is because Amanitas have a mucilagenous (slimy) quality similar to honey mushrooms when boiled, the leftover liquid will be almost snotty after it has cooled. When I pickle honey mushrooms I always par boil them first in salted water and then rinse, then cover with a pickling liquid, the same method is applicable to muscaria.

Methods I tried were simply fried, boiled, rinsed, and then dredged in a little flour and fried crisp, served with a lemon wedge, marinated in oil and herbs Italian style, or pickled. Some people say that they only eat the caps of these, but when I’ve eaten them I eat the whole thing. The whole mushrooms is edible, with the exception of the vulva that I would remove before eating-the shaggy part on the bottom of the mushroom’s stem, it can be scraped or cut off easily with the side of a knife as it’s generally dirty, or where the bugs will start.

In the end, this is probably a mushroom best left for viewing, unless you know what you’re doing. I think it’s unfair all Amanitas suffer from demonization in the United States though, as do plants in the Apiaceae family (the family that hemlock belongs to), you should know that in Europe there are a number of Amanita sold in markets or as canned goods–they’re not all something to be crushed under your boot. Amanita cesarea, for example, is absolutely delicious dipped in olive oil. There is value in studying and learning to identify different plants and mushrooms, even if you don’t intend to eat them. Everything in nature has a special role to play. 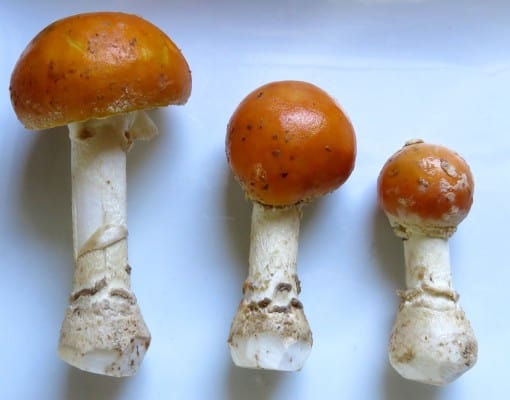 when washed and cleaned, the “warts” on their cap come off. Remove the vulva from the stem as well. (This is not done in the picture)