Behold the glory of leftovers! Breakfast venison hash is a great example of how I use leftover wild game meat-especially braising cuts from deer. It also uses two culinary adjectives everyone I know loves: tender and crispy.

Story goes I'd come home after dinnertime from working on a few different videos for the grass fed lamb and goat farm I work with. None of the recipes were ready to eat yet, and I'd totally forgotten to plan out something for dinner.

Racking my brain for the easiest, quickest thing I could make, I remembered that I'd taken some venison trim from butchering a leg to make stock for one of the videos, and the trim was meaty, meaty enough that it could make a meal. Now, boiled, unseasoned scrap and trim might not sound like the most appetizing thing, but it can be if treated right.

I don't know of any culture that has a specific name for the process, but it's definitely a thing, especially in the Middle East. I guarantee you: meat that's been cooked twice, first by browning and then simmering in liquid, followed by draining and a second browning makes for absolutely delicious, melt-in-your-mouth crispy chunks known as griblets in our house.

The process is as easy as it sounds: brown some chunks of meat (or just boil them if they have an odd shape, like a shank, etc) add stock or water, simmer until spoon-tender, then chill to help hold their shape. After chilling, you drain the meat well, using the stock for another purpose, and fry those spoon-tender pieces golden brown.

Twice-cooked meat is only half the equation here. Vegetable hash is a great meat grinder for all the vegetal odds and ends lying around in the fridge: a couple radishes, a handful of spinach, the bottom of a butternut squash, a couple tired carrots or potatoes, that handful of cauliflower, three Brussels Sprouts that escaped the bag—you get the idea.

Veggie hash is super easy, with one catch: you can't just throw the veggies in the pan raw. All the different vegetables will have different individual cooking times, and you need to level the playing field, which you do by blanching or otherwise par-cooking in some way. Blanching is preferable here as sautéing could lead to greasy veggies, and is how I would instruct my line cooks to prepare things like this, say, for Brunch.

After you blanch the vegetables, you drain them and add to the pan with the fried meat chunks, give them a toss, add some seasonings, and serve in a bowl. I often put a "swoosh" of sauce around the rim of the bowl or in the bottom of a deep bowl as a condiment, mayonnaise-y things like aioli or seasoned sour cream are great.

Most people think of corned beef when they hear the word hash, and you can use corned meat too. Some people might want to use ground beef or ground venison, but those won't cook up the same as chunks of cooked meat-trust me. If you want to make ground venison hash, you'll want to brown the meat on medium-heat first, then drain and add to the vegetables just to heat it through. 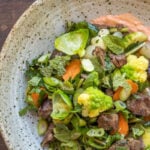 This is a small batch, I would suggest doubling it. The process here is what’s important, more than an exact recipe. Serves 2, scale as needed
Course: Main Course
Cuisine: American
Keyword: Hash, Venison

To finish the hash and serve