Here's a great recipe for an evening after a squirrel or rabbit hunt, especially if you have nice fat grey squirrels around like I do. When I butcher a deer or lamb, I usually save some offal, but, with limited freezer space I do have to pick and choose, and I don’t usually keep every single thing. Small game like squirrel, pigeon and rabbit are a different story though.

If you haven’t had them, the wee giblets of those smaller animals is a different creature from large ungulates. If you generally shy away from organ meats, know that the wobbly bits of little creatures is mild and delicious, not to mention that they take up a fraction of the space compared to the organs of the bigger animals. If you you find yourself with some, a bowl of Tuscan inspired fettuccine with chopped giblets, spinach and caramelized onions is a good thing to make with the, regalie, or “gifts” as the choice bits are called.

Squirrel, rabbit and pigeon offal is mild and delicious

At the risk of sounding repetitive, I need to really emphasize one of the big takeaways of this post: small game organs are delicious and nothing like bigger animals. Heck, I'd put money on being able to serve squirrel, rabbit, and pigeon organs to children they're so mild.

The kidneys of rabbits particularly might be my favorite and I used to save them for myself when we would get rabbits in at one of the restaurants I used to work at.

When I got back home from my shift, I'd treat myself to a couple cold beers and a big sliced of grilled bread topped with raging hot deviled kidneys with a sauce of  reduced stock, butter, cayenne and mustard.

The fettucine is loosely based on the classic Tuscan pasta with chicken livers, which, if you don't have small game livers, are fine too. The key is cooking everything together quickly, and not allowing the giblets to overcook and dry out.

While a lot of similar recipes rely on cream this one is a simple, almost sauce-less pasta, with a splash of chicken stock, and just a hint of dairy in the form of sweet butter and parmesan folded in at the end. I hope it can inspire you the next time you have access to some small game goodies. 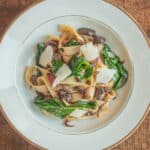