I love simple, rustic desserts, easy things that can be thrown together. There's just something about a bowl of good cream, whipped to soft peaks and mixed with fresh berries that just tastes right.

The more I cook, the less I cook like that, and sometimes I just want something simple. Syllabubs are simple, and, unlike most berry-cream dishes, this one's designed for a Midwestern Winter, when there's preserves to use.

What's a syllabub? It's a light, boozy dessert, and a sort of American, old-timey sweet that's endearing in their simplicity. I made my first one after reading James Beard wax about them in one of his books (I forget which one).

Over the years, I've had my time addicted to researching French, Italian, and other cuisines, but there's something to be said for digging in the American crates, too, and Beard is a treasure trove of classic culinary Americana. Essentially, a syllabub is just whipped cream with booze in it, which by itself isn't that exciting, but when paired with a couple other things can make a fun dessert.

More importantly, I thought it could be a good vehicle for my serviceberry jam (I ended up preferring nannyberry butter as it's seedless), and any other preserves I had laying around collecting dust in the pantry, along with some of the last shards of candied angelica stems hiding in the fridge.

Pick a jam, any jam

If you pick fruit and make preserves, or know someone who does, you know there always ends up being a jar or two laying around the following summer, or maybe you were gifted and extra jar of something, or whatever, and it's been waiting patiently to be used.

This, and the different variations you can do with whipped cream, yogurt, fruit, and nuts, are all are great candidates for using up that last little jar of jam, instead of just reaching for toast (not that there's anything wrong with jam on toast). If your jam is stiff, you may need to loosen it a bit for this.

The recipe I ended up with layers the syllabub with spoonfuls of nannyberry puree, and soft brioche or a sweet bread for some texture, although pieces of meringue would be just as good, and I'll be making it with them next time.

To garnish, there's some candied angelica, and toasted almonds. The finished dessert is probably closer in composition to a trifle with the brioche in it, but you could leave it out for a version closer to the American original, or use pieces of cake or macaroons, especially dense, interesting things made with some kind of nut-meal.

At the end of the day, the syllabub can be something you throw together with whatever you have. Don't have angelica? Skip it. No Gran Marnier? Ditto. Want to mix the jam into the cream for a fruit swirl? Do it.

My version is just as light and fluffy as James Beard's original recipe, but to deepen the flavor of the cream so it isn't all booze and no fun, I scent it with orange peel and carroty angelica seeds that are infused into the wine an strained out before whipping. For a more angelica-forward dessert, you could sweeten and whip my angelica creme fraiche. I'm sure you could use your imagination to come up with something similar. 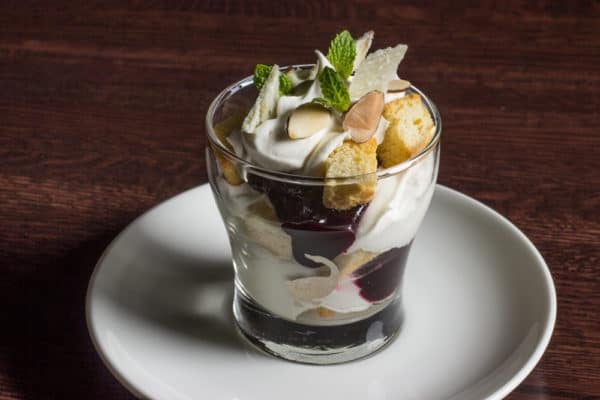 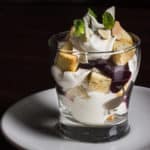 Lots of ways to vary this, but here's a few ideas: