Almost a custard, a posset is an old English dessert you can think of like an eggless lemon pudding. Made with spruce tips and lime juice instead of lemon it tastes as refreshing as a Spring breeze. The best part is it's the easiest spruce tip recipe I know. Read on and I'll explain the details.

Silky-rich and custardy, but without any egg, possets are one of the best desserts I've discovered (thanks to my old pastry chef) in recent years. They were totally new to me, but apparently they're an old fashioned British dessert that used to be relatively common in America around the mid 20th century, but more so as a food for invalids and infants than as a dessert.

A spruce tip posset is a great variation on the traditional theme and flavors, and one you definitely need to try if you like spruce tips. Besides being an egg-less custardy dessert, which is interesting in itself, there's a little wizardry in them around how they actually set.

When you think of a custard, panna cotta, or creamy dessert, what do you think of? Eggs? Cream? Gelatin? I sure did before I met the posset. The setting process is where the posset differs from a lot of other custards in that they use citrus to set the custard, typically lemon. It's a bit of magic, and one of my favorite spruce tip recipes.

Cook some cream for a bit with sugar and put it in the fridge and nothing too exiting is going to happen. Add some lemon in the mix, and the dairy will react to the citrus just like adding rennet. A little sugar helps to stabilize the mix and, voila, a light, eggless custard forms after it's allowed to rest in the fridge.

How much citrus does it take to set?

Traditionally possets I've tried have an aggressive citrus taste, which does double duty of helping the mixture set. There problem developing these was that after switching the lemon to lime, since it pairs better with the spruce, the lime was too strong, and it tasted like key-lime posset.

This left me with the question: "how much citrus do you actually need to help the custard set?". I suspected it was less than the traditional posset recipes called for since they were also using the citrus as the main flavor, so I cut the lime juice in half so there was just enough to brighten the spruce flavor.

Side note, I used to work for a chef from Milan who told me that panna cotta, which literally translates to "cooked cream" was once a dessert made without gelatin, which, when you think about it makes sense, as that's what the name means.

Now cooking down cream will eventually produce something that sets, but it's definitely expensive, so, it follows that perhaps someone added gelatin to cream somewhere along the line to cut the cost of the dish and streamline it.

Just because this is easy doesn't mean it's easy. If you have any desire to make this read the following notes. 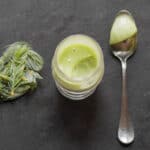 Serve in small amounts (4 oz ramekins) if you want to serve larger servings, cut the spruce tips by at 30%.