I've been really excited to work with angelica stem in it's fresh state this year. It's flavor is so interesting and powerful. The problem is there really are no culinary resources online where I can scroll or look up angelica recipes.

I know I wanted to use it in desserts though, especially some sort of a peach crumble or crisp, but stone fruit is a ways away. Local rhubarb is available though, and I thought It would be fun to try playing with the two together.

We were starting to run low on chutneys and garnishes for our cheese plate at the restaurant, so I started out making a small batch of compote, cooking the rhubarb down with vinegar and sugar to preserve it. My thought process being that if the flavors melded nicely I could re-engineer it for a dessert, and kill two birds with one stone.

It took a week but I got some spare time to play with the dessert version, basically all you do is remove the vinegar from the mixture. I'm featuring the compote on the dessert for the upcoming Slow Food Minnesota dinner this coming Sunday at Piney Hill Farm.

If you've never tasted angelica, and would like to, follow the link here to the event page, the dinner is about at capacity, but I have enough prepped out to serve extra. After the meal I'll be giving tours of the farm and talking about what's in season and hunting wild food in general. Here's a link to more info on the dinner.

Well let me tell you, when I tasted it, it sent shivers down my spine. 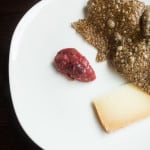 A basic recipe. I put cherries in for texture, because they were the only dried fruit I had on hand, and because the flavor works well with the other ingredients. You could easily just make this with rhubarb and angelica though. For the best results, make sure not to overcook the rhubarb. It will taste the best when the rhubarb retains it's shape slightly, it shouldn't be a total mushy-mash, there should still be large, tender pieces in it. To not over cook the rhubarb, you'll need the widest pan available to you. I was making this in a 20 inch saute pan. If you have a ten inch or a similar size pan for home use, you'll want to make this in small batches.