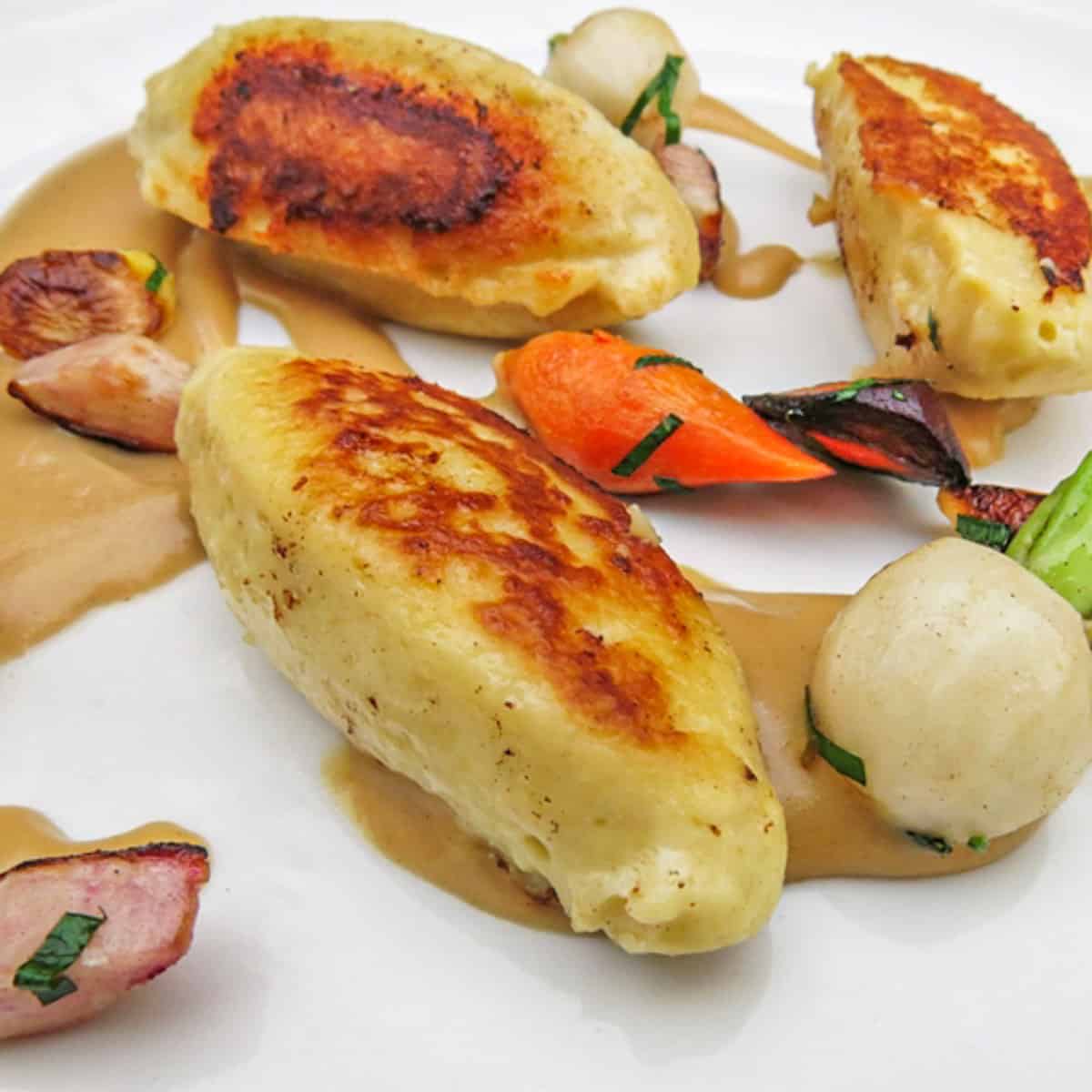 It may not look like it, but this is a study in giant puffball mushrooms. Typically you see puffballs breaded and fried, but you can't always have them fresh, so here is a fun recipe I dreamed up using powder made from their dried slices. Essentially, these are just puffball flavored dumplings made from a modified eclair dough, with a sauce made from caramelized, dried puffball powder, all accompanied by some cooked winter vegetables to round out the dish.

I played around with more of the puffball mushroom flour a few weeks ago, trying to deepen my understanding of how it can be used. Its a bit difficult to wrap your head around it's properties since it deflates when it touches heat, losing much of it's volume. The only way to figure it's culinary uses is to just mess with it and see what works.

One thing I knew that would be easy to improvise, even with the flour's strange properties is a small gnocchi like dumpling called a parisienne, which I utilize often. Parisiennes are different from potato gnocchi in that they are made from eclair dough, otherwise known as pate a choux (pot-ah-shoe). I knew that the dough would be easy to make since the flour mixture is cooked through with a bit of butter on the stove top, which I knew would allow the puffball flour to show its true volume.

Instead of cooking potatoes for typical gnocchi, you can just cook these over the stove and the dough comes together easily in a small pot, no kneading or peeling of potatoes required. Parisiennes are also different in that they are typically fried golden brown after they are cooked in water until they float, where traditional Italian potato gnocchi are cooked in water and then tossed with a sauce immediately. I tend to not like searing potato gnocchi golden brown, I think it makes them overly chewy. I should mention though that the typical potato gnocchi I make are egg-less utilizing only flour and timing to create the dough. Gnocchi made with egg in them can be seared and caramelized a bit better.

I make parisienne dumplings out of everything, the pate a choux is very flexible as far as what you can incorporate into it, much like spaetzle. Vegetable purees like spinach can be added to change the color, check out the green speckled version I made with ramp leaves last spring here. Since the dough gets whipped with eggs after is it mixed, and the eggs are the bulk of what make them float when they are poached, you can also substitute gluten free flour such as millet or wild rice flour.

In all reality though this is essentially two recipes in one, the puffball gnocchi and the puffball sauce don't have to be served together at all, you could just take your pick of one, instead of attempting the entire dish. The puffball sauce would be a shoe in for some pasta, kind of like a puffball alfredo, just add a little water as needed to thin it. The gnocchi fried by themselves are wonderful with fresh vegetables, or as an accompaniment to meat. after the gnocchi are poached in water they can also be baked with a little cheese on top until brown. Just remember that parisienne gnocchi don't like to touch wet ingredients after they have been fried, steam will make them limp and soggy.

Anyone else have some unique ways they cook puffballs? I'd love to hear them. 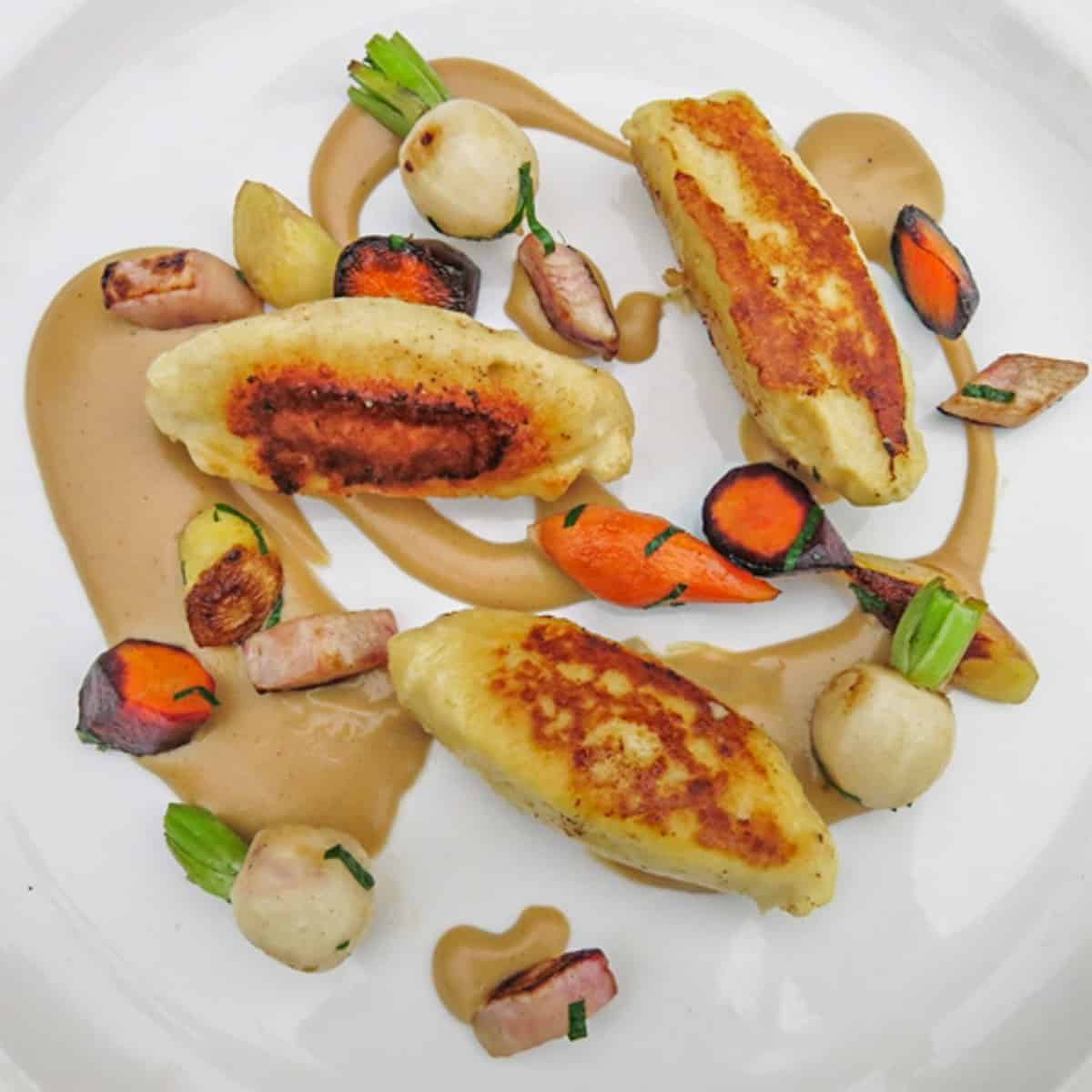 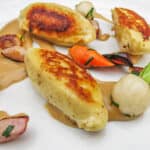 END_OF_DOCUMENT_TOKEN_TO_BE_REPLACED

« Looking In The Abyss: A Bout With Lyme Disease
How To Cook Brains »