Matsutake Ramen is one of the first ways I served matsutake for tasting menus after I worked with them for the first time. It's a good starter recipe for using these mushrooms.

They have a smell and taste like nothing else. They're matsutake; one of the most interesting things I've cooked with.

They have a flavor that's difficult to describe. Other mushrooms like Boletes, and their cousins Leccinums, Suillus, and Tylopilus, all have a sort of taste/aroma, and you could make other comparisons with chanterelles, trumpets, and plenty of mushrooms by separating them into their related species.

They're related to shiitake and honey mushrooms, but any similarity ends on the microscopic level. People have said they smell cinnamon, red hots, gym socks, funk, fish, and to me they're all right- it's kinda hard to explain them.

One thing is for certain though-their flavor is powerful. Even peeling or chopping a single mushroom can perfume a room. Even so, just like other potent fungus (truffles), they can be easily overwhelmed by too many other ingredients.

With their hefty price tag, you don't want to waste any of these guys. This simple soup is a great example of how to stretch those matsutake as far as possible, it's easy-I'll tell you how.

When I receive matsutake in a restaurant, they've usually been out of the ground for a few days, at least. Unless you have a matsutake patch of your own, this will probably be the case for you too.

What happens is that the mushrooms dry out a little. Sand and grit stick to them in the worst way. Washing, brushing, or scrubbing I've found can be pointless sometimes. To really get the most out of purchased matsutake, you're probably going to need to peel them.

As I was peeling a big batch one day, I kept putting my nose into the bowl of trim that I was going to throw. The smell of the scrap alone was so intense that I decided to infuse some stock with it. It turned out so good, that now I never even think about tossing the peels. The stock has to be strained carefully to remove the grit, but it's a small price to pay for the outcome.

Matsutake beg to be cooked in Japanese style dishes. I'm not a professional at making ramen by any means, but I get by. What could be better than some ramen in matsutake broth?

You could switch up the garnishes any way you want. The only keys to this are a great homemade broth, the peel from the matsutake stems, and using plenty of the mushrooms themselves, the rest is up to you.

Here are the garnishes I used: 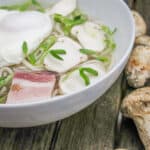 Feel free to be creative and garnish your ramen with whatever you like. It's also totally fine to use packaged ramen noodles here-the cheap kind you ate in college.