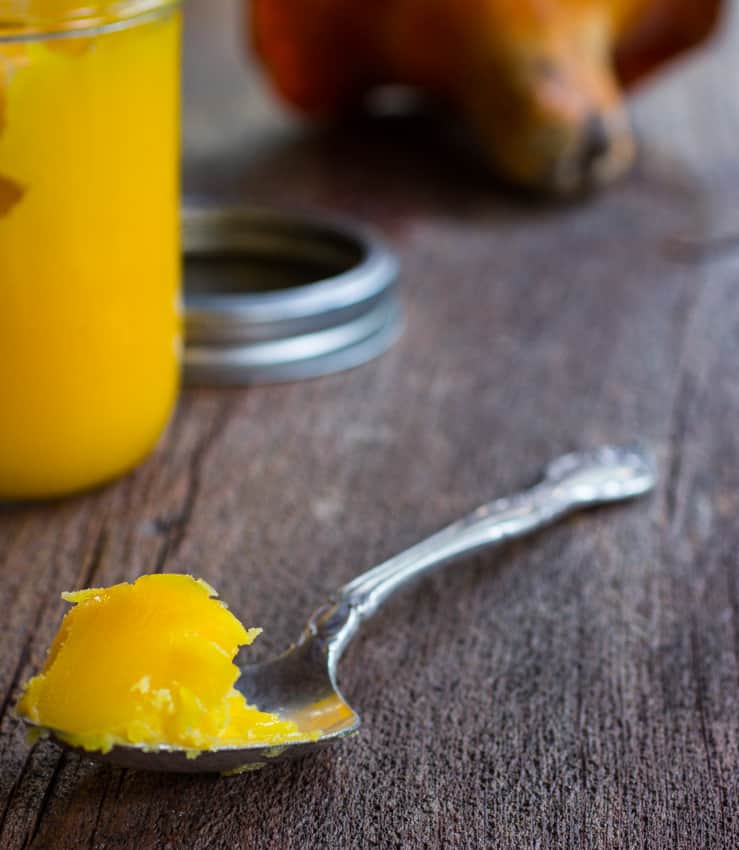 This is hands down one of the coolest things I discovered cooking with lobster mushrooms. Here's the story.

I was on the line at Heartland one evening. It wasn't so busy that I couldn't work on some projects in my spare time, so I set about trying to preserve some of the haul of lobster mushrooms that had come in recently. We had plenty of lobster mushroom pickles and conserve already, so I wanted to preserve them a different way.

Thinking about the affinity for lobster and butter gave me the direction I was looking for. I took twenty pounds or so of whole lobster mushrooms, put them in a large hotel pan, and then covered them with butter and a sprinkle of salt, a couple garlic cloves, and some herbs.

I put the whole thing in the oven and cooked it slow, until the lobster mushrooms were completely done-the intention being to keep them preserved underneath the butter after it solidified in the cooler, like you would duck confit.

When I took the pan out of the oven, I noticed something interesting-all the butter had turned brilliant orange, and the whole pan reeked like lobster mushrooms. 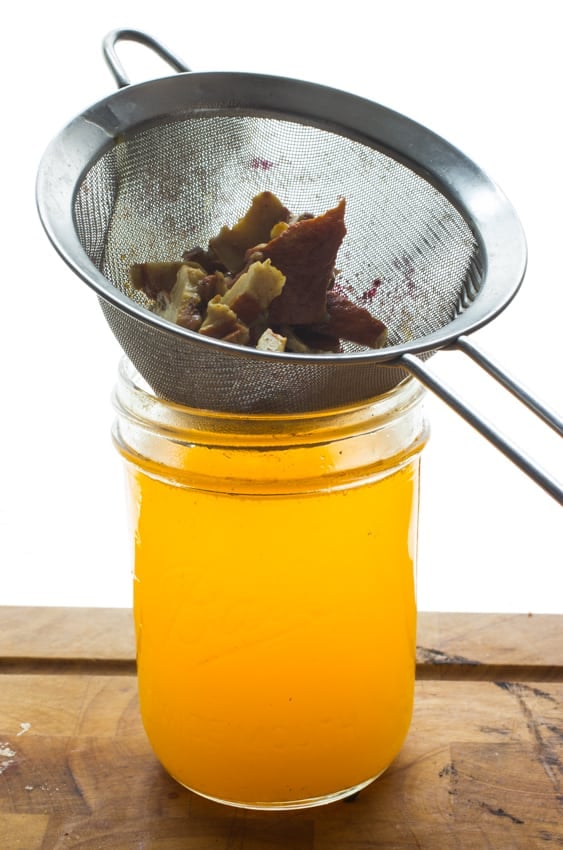 A great outlet for that lobster mushroom trim and scrap.

Now, if you know a thing or two about butter, you know that it takes on the flavor of what it comes into contact with. To clarify a bit too, "contact" doesn't have to be physically touching or cooking. In fact, butter takes on flavor so well that you have to be careful, storing it in a fridge with unwrapped, sliced onions will make your butter taste like onions; the same will happen if butter is stored next to any ingredient that's aromatic or has a strong smell.

The butter turning orange is something I had noticed with lobster mushrooms before, while making little batches of risotto a couple years back.

The red fungal coating on the outside of the mushroom acts like saffron when it comes into contact with heat and fat. You don't have to use the whole mushrooms for this either, I've done experiments just scraping the red coating off or using trim, and it works just fine.

This time though, I had a lot of the orange butter, and with the multitude of lobster mushrooms cooked in it, it tasted just like them: sublte shrimp and mushroom flavor, all at the same time.

Everyone on the line was intrigued, and after that I remember forgetting about the lobster mushrooms. I moved on to experimenting with just the butter itself, I felt like I'd discovered something; unlocked a secret no one knew.

Here's some ways the butter is fun to use:

This year I planned on doing more experiments with the lobster butter. I wrote down some proportions that work great, and the best part is that you don't have to sacrifice any of your lobster mushrooms to make it.

Like I mentioned before, the color and flavor transference is locked in the red coating of the mushroom, so all you really need is some scrap and trim. Afterwords, you can cook with the butter just like you would clarified butter. There are some really cool recipes we've come up with over the years for using this funky stuff-I'll share some with you soon. 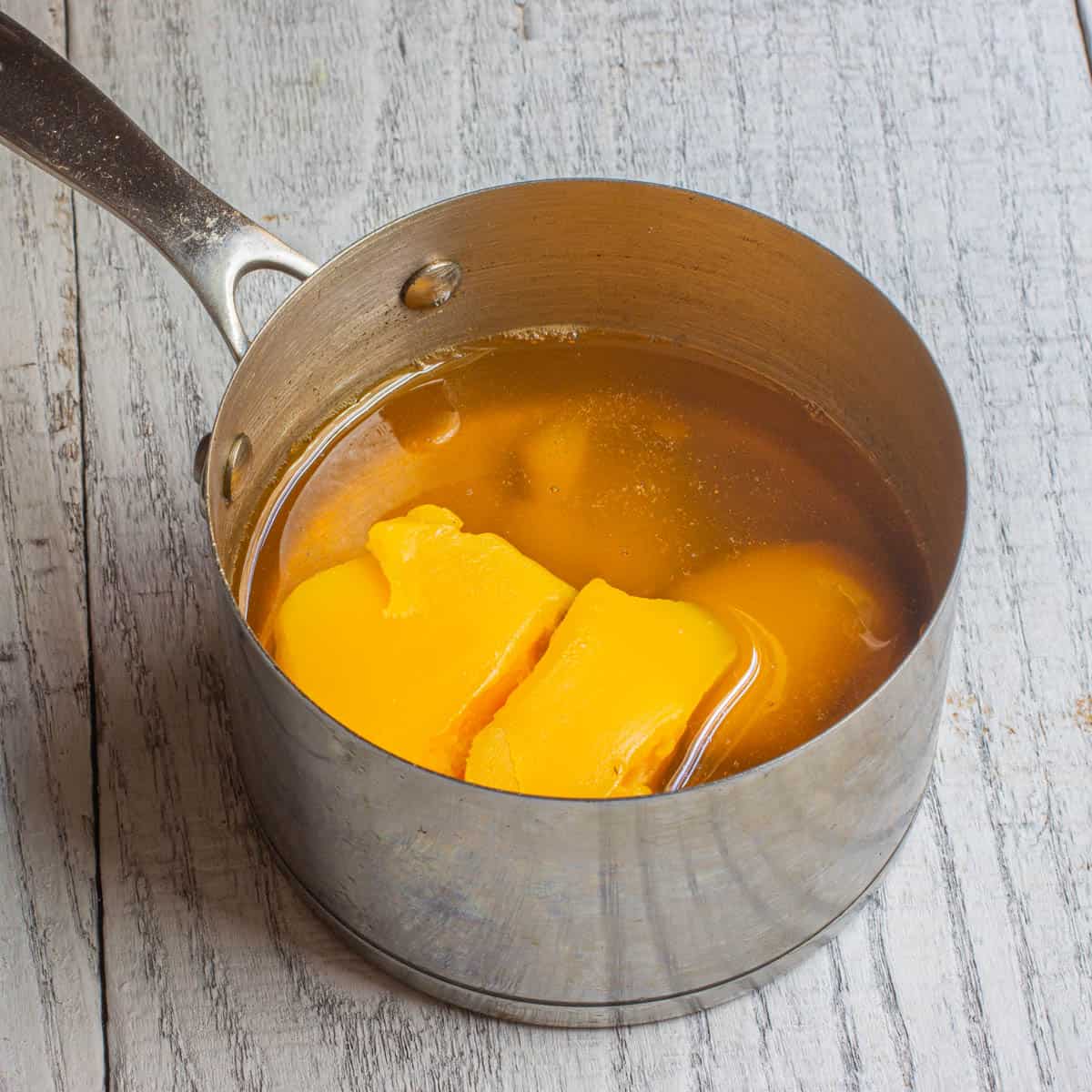 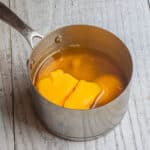 Safety and Shelf Life  The water in the lobster mushrooms will be released as they cook, which will be hidden under the solidified fat after it cools. You want to remove the juice since it won't allow the butter to be used as you would fat for cooking (it will cause splattering, and it could spoil). To remove the juice, just dislodge the giant chunk of butter from whatever pan you cooled it in, drain off and discard the juice from the bottom of the pan, wipe any remaining sediment away with a towel, and then refrigerate again.