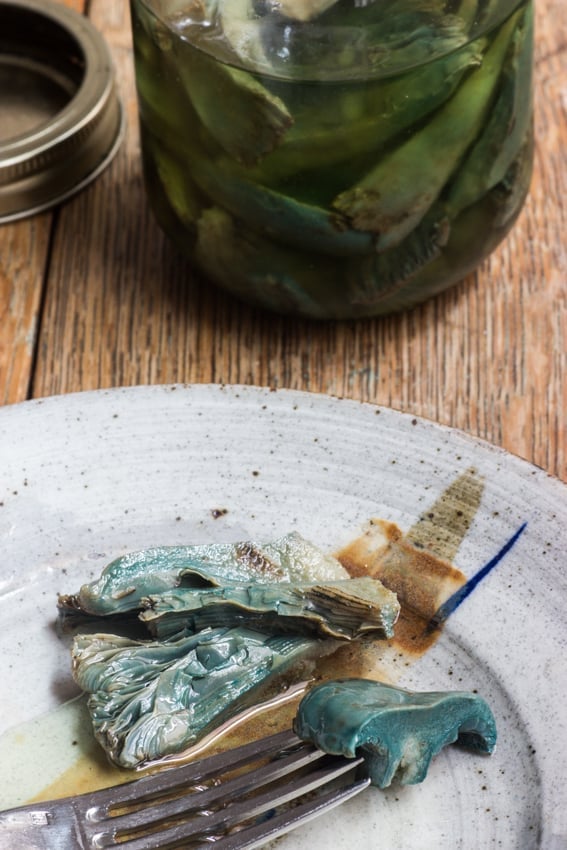 Delicious blue mushrooms! Sounds like a joke or a drug, right? Indigo milkcaps a.k.a lactarius indigo are pretty cool. They're one of the only blue foods that you can eat that I know of, with the exception of a couple berries and potatoes.

I can still remember the first time I found one, baffled by the vibrant blue. Most of the indigos I found at first were huge and bug damaged, but over the past few years I’ve been able to get some nice, unspoiled ones if the stars, and the rain align.

The first time I ate them I was a little disappointed though, the mushrooms cooked up good enough, but they turned brown after being sautéed in a pan. I kind of gave up on ever being able to preserve the color of the blue mushrooms, that is until I saw a jar of pickled mushrooms on a Russian recipe website (I forget which one). There was a mix of different mushrooms in the jar of pickles, but here and there I spotted long streaks of blue, then it hit me about the simplicity of why the mushrooms lost their blue color.

Citric Acid or Vinegar: The Key to Keeping Your Lactarius Blue

Here was my "aha" thought: browning something in a pan is going to do just that. The reaction to fat and a pan is what robs the mushroom of it’s blue color. Cooking the mushrooms in a wet method, where they don’t have dry contact with a pan, will preserve it’s color. Considering that you might want to just pickle them, but not so fast-there’s a catch. 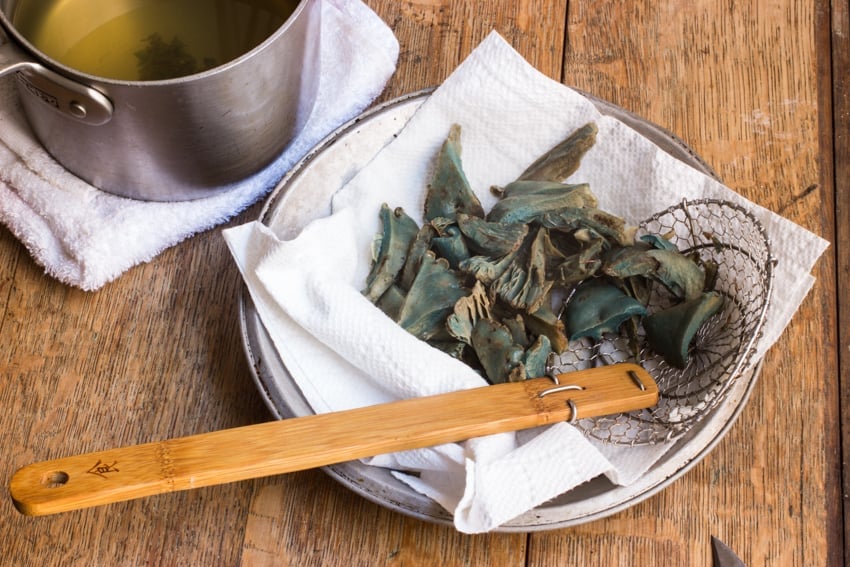 The caveat to cooking lactarius and preserving in jars, from my experience, is that the mushrooms develop a sort of mucilage, which makes them pretty slimy when preserved in their own juice and stuffed tightly in a jar. Honey mushrooms and amanitas do this too, and I’ve found give off much more of the stuff than lactarius, but it’s still there nonetheless.

In a nutshell, I wanted to preserve lactarius indigo in a tasty way, and keep it’s blue color, but I also didn’t want it to be slimy. After a couple experiments I got the result I wanted.

Here's what you do. You take your lactarius and blanch them in a seasoned pickling liquid, which also acts as a preservative. From there, you drain the mushrooms thoroughly and then pack in some flavored oil. The preliminary blanching leaches away the snot effect, but it also functions as a way to impart flavor, as well as lower the ph for their stasis in the fridge.

The olio santo here is something I adapted from one of the greats of Italian cooking: Guiliano Bugialli, and I've been using variations of it for years. It’s a great way to flavor oil without having chunks of aggressive things in it like garlic. It’s a great, simple recipe, perfect for garnishing grilled meats or vegetables, or perfuming something that will be around for a while, like these blue mushrooms. In Italian Olio Santo translates to "holy oil", which I always thought was fun, I remember telling employees at a couple different restaurants I was "anointing" things with it. 🙂

These are a lot of fun, and great as a little snack. I'll mention too: it's a total misnomer that mushrooms pickles should be eaten cold, quite the contrary. One of my favorite ways to eat pickled or preserved shrooms is warm in the morning with some eggs or with toast, the crunch is an awesome foil for the chew of the mushrooms. Next time you find some indigo milkcaps, give it a try. 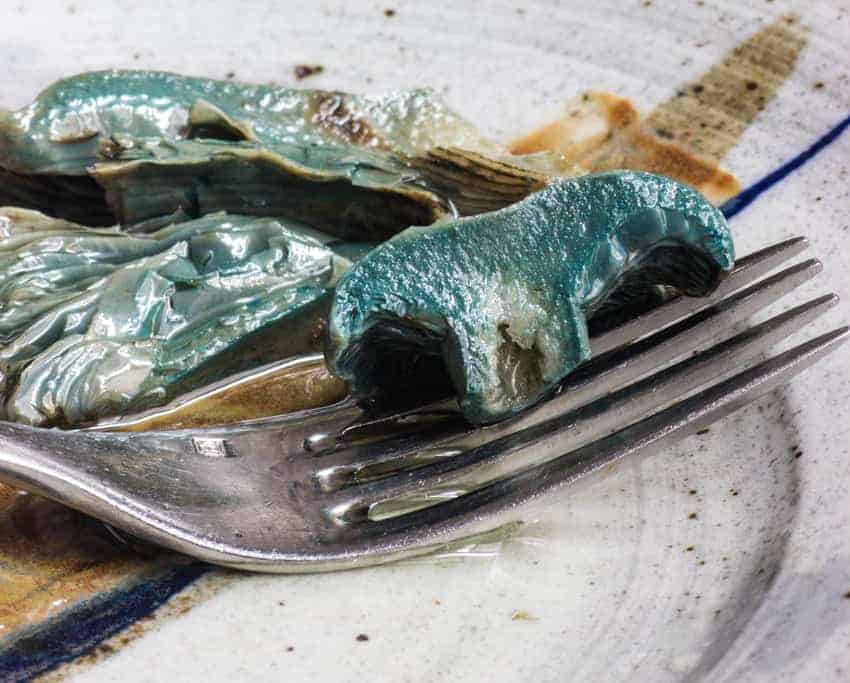