This is a very special recipe to me. At first glance it looks like some shrimp with vegetables and mushrooms. In reality, it's a snap shot of my formative years as a cook, when I was working under a man from Rome I adored; trying to learn all that I could from him.

I was up in the big Twin Cities, at a "real" restaurant, and I would have wet myself had they even given me the chance to try my hand at their saute station. Of all the dishes though, there is one that comes to mind besides risotto that only the sous or head chef Angelo Volpicelli (who I admire so much) would make, the signature dish of the restaurant: "Gamberoni Portofino".

One of the things I like most is the name. It translates to something like "shrimp of the final port", evoking the thought of a nice meal at the end of a journey or something, I would think.

The secret to the sauce is the soy, it adds this umami-ness to it that's surprising, you can't even tell it's there, but it will leave your friends crooning. Alongside the shrimp and mushroom sauce, it was served with asparagus and a rotating starch, typically some potatoes, usually mashed or roasted.

I've been waiting to make this dish again, to relive a bit of my past. I modified a few things to deepen the flavors and add interest, here's what I did:

Instead of asparagus, I used some milkweed clouches, since they are in season right now. If you're wondering what a "clouche" is, it's a term I learned from my friend to describe the tender, top growth from plants.

I have yet to find a culinary or botanical example of it in a guide, but it's a term he brought with him from the CIA, so I trust that. You can certainly pick off milkweed buds, but picking off the entire top potion of the plant gives it more of the effect of a small vegetable, as opposed to just a broccoli like floret.

Instead of portobello mushrooms, porcini are incorporated here in two different ways. First, they are substituted for the portobellos themselves in the sauce, but the real treat here is that I substituted dried mushroom soy sauce for the regular soy.

Given that dried porcini are easily found in supermarkets, it makes this dish really approachable for home use as well. Even if you don't feel like making the whole thing, at least give the porcini-soy cream a try sometime, it'll knock your socks off. 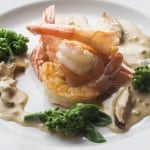 Serves 4 as an entree. We would usually serve this with a starch on the side, like mashed or roasted potatoes, rice would be good too.
Prep Time25 mins
Cook Time15 mins
Course: Main Course
Cuisine: Italian
Keyword: Gamberoni, Milkweed, Porcini Soy
Servings: 4