This dried wild mushroom chili crisp recipe has been on near constant rotation in my lineup of favorite condiments for a couple years now, and, also happens to be the only recipe including mushrooms in The Forager Chef's Book of Flora

Wild Szechuan peppercorns are one of the key ingredients here (along with dried wild mushrooms). The fruit will have mostly winnowed themselves now in early September, by dropping their gritty seeds, so it's the perfect time to share it.

Two years ago I started seeing some of my chef friends freak out about little jars of chili sauce. I thought I knew what they were talking about, you know, those little jars of dried crushed red pepper flakes in oil you'll see on the tables at Chinese restaurants, that seem to have been the tables since the restaurant opened.

Those little jars on the table never really did much for me, I mean, all they were was dried chilis in a pale, orange oil, they were spicy, sure, but not much more as some are literally just dried chilis, oil, and nothing more.

Later I learned those jars of chilis in oil are a cousin to what I'm sharing here, made with a different method of simply pouring boiling hot oil over dried chilies.

Not wanting to miss out, I ordered a jar of the brand my friends seemed to be putting on everything, and, yeah, they were right. The first one I ordered was the well marketed Fly by Jing, as well as some from Celebrity chef David Chang.

Oh man were they good. It was a completely different animal than the pale, dried chilies in oil I remembered spooning mindlessly on plates of noodles in college.

These were an oily, umami-packed, spicy, but not too spicy sauce filled with all kinds of things. When I tasted the aroma and gentle zing of Szechuan peppercorns in it, and then looked at the ingredients, (as well as the price tag of 18$+shipping for ¾ cup/6oz) I knew I had to make a version with my local Szechuan peppercorns / Xanthoxylum americanum.

If you have commercial Szechuan peppercorns, you'll want to decrease the amount as they're much stronger than the wild ones that grow in the U.S.

I bought a few different jars from different suppliers, pouring spoonfuls on plates to inspect the contents, like any normal culinary forensic analyst would do. You can see a lot in a spoonful of hot chili oil.

One thing I noticed, that I couldn't quite put my finger on, were the tiny little fermented black beans in my favorite brand of sauce. I knew I needed to use some of the beans, so I went to my local Asian market Dragon Star to find some. The only fermented black beans they had (and any other store I went to) were in jars, and quite wet, and they didn't taste the quite same.

Next, I tried to make my own, first fermenting black soybeans in brine, then mixing them with koji rice to accelerate the lacto-fermentation. Neither tasted the same.

My fermented beans got nice and sour, but they lacked the smoky quality and a certain "je ne sais quoi". I suspect this has to do with a misunderstanding on my part.

Fermented, dried black beans should be salted after fermenting in their cooking liquid, the lack of salt placing them firmly in the school of alkaline fermentation, instead of lactic acid fermentation, which will produce a sour flavor.

Having experience cooking with African soumbala / DawaDawa (an ingredient for another time) helped me out there.

It took awhile, but, after divining the contents of a few more spoons of sauce and some armchair research, I found the right beans. For this sauce, you want dry fermented black beans, also known as douchi. Pearl River Bridge Brand is the best I've had so far.

It took over a month, hundreds of dollars in product, and lots of chili-phagy, but I came up with a version I liked.

I learned a lot during the process, not the least of which is that I'm also addicted to the toe-curling aroma that fills the entire house as a small pot of ingredients gently bubbles away on the stove.

This is the sort of thing you should make at least once in your life, just to taste the aroma alone. The best part, is that you can customize it however you like, and all the ingredients can be ordered if you don't have them near you.

Where I use it 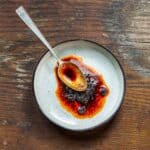