The cornflower bolete is a beautiful, edible bolete mushroom that stains a vibrant blue when cut. It's a delicious cousin to porcini mushrooms every forager should know. 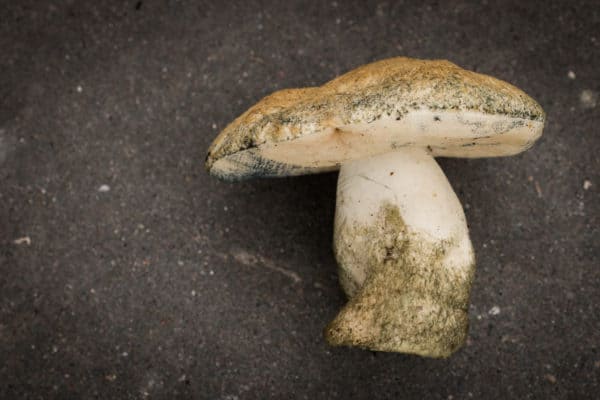 If there's a better foraging parlor trick than showing someone whose never seen it a mushroom stain deep blue after being cut I don't know it. Gyroporus cyanescens a.k.a the cornflower (as in cornflower blue), or blueing bolete is probably the best example I know of for a mushroom that stains blue after being cut that's really worth getting to know.

Contrary to the "rule of thumb" some people go by that rules out boletes for edibles if they stain blue, Gyroporus cyanescens is completely edible, and delicious. With it's staunch resistance to bugs, I might even say I prefer cooking it fresh to porcini (the heresy!)--It's true though.

I typically find Gyroporus cyanescens in the summer when I'm out hunting things like chanterelles and black trumpet in hardwood forests with plenty of oaks, but I've seen them in more mixed woods heavy on the aspen too, especially in Northern Minnesota. Unlike chanterelles and trumpets, it seems like their mycorhyzal relationship could be more with the ground itself than specific trees, according to some of the experts, which would account for people seeing it in odd places like meadows with no trees in sight.

Thankfully, there's a good indicator for where you might find them: the soil. Just like black trumpets have a definite affinity for sphagnum moss where I live, cornflower boletes love, love, love sandy soil. I have one place I go to where just about every year I can count on finding a few of them, and it is only in a small area where the ground turns sandy in the middle of the woods. Keep that in your hat for a rainy day, and remember the next time your out in the summer hunting for mushrooms.

Another thing to keep in mind is how these fruit. Unlike porcini that can often congregate in dense clusters, or at least within a few hundred feet, Gyroporus cyanescens, and it's cousin castaneus (the also delicious, if small chestnut bolete) grow singularly. They grow alone. What this meant, at least for me, was that, while, picking other mushrooms, I'd innevitably pick one or two here and there, but I figured they were never worth focusing on as I couldn't find giant flushes of them. I was wrong. Here's how I think of them now.

Think of picking these boletes as if the patch were really, really big. They're scattered, so you may find one here and there, but if you pick everyone you see, and purposefully seek them out, you absolutely can get a good harvest of these mushrooms. The same thing goes for Gyroporus castaneus. Just because you don't see a bunch doesn't mean they're not there, it may just mean they're spread out a bit, and collecting enough for a meal will take a little time.

I've been hunting this one for a while, and there's a few characteristics that don't get mentioned sometimes that I find helpful.

Like I mentioned before, these mushrooms have a fantastic resistance to bugs, absolutely bulletproof. In fact, I'd wager that I've never even picked a cornflower bolete with bugs in it. With most other boletes I pick, with the exception of a few in the Leccinum genus, I often have to dry the mushrooms since there is bug damage, especially with porcini. With cornflower boletes though, you can eat them fresh, and, in my opinion, they're best like that.

The flavor is ok, dried, but cooking up fresh boletes is such a rare treat, I think it's great to toss them in a pan and have them however you like. These have a great, rich flavor, with a hint of the delicious nuttyness you'll get with other boletes, most similarly their delicious nutty tasting cousin the chestnut bolete.

The simple recipe I made with my last haul of them follows--it's a good, simple side dish or vegetarian entree based off of one I ate in the south of France made with Amanita caesarea. It's quite good, but there's nothing wrong with frying them up in butter too! 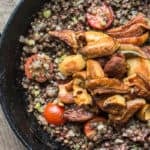