I've been on a cold soup kick lately at the restaurant. During the Summer, I crave cold and room temperature food.

Of course I've had tomato gazpacho, but It wasn't until I tasted Daniel Patterson's now famous chilled pea soup with buttermilk and nasturtiums that I started to understand the possibilities and thought process of cold soup I might experiment with as a chef. In some ways serving chilled soup is easier to execute than a hot one in a restaurant (or home) setting, and in other ways more complicated.

As far as our soup here, like most things it was a multi stage process. I had been running a cold carrot soup with wild carrot flowers for a little bit that was getting great reactions, but after serving it for two weeks straight I needed a change.

As usual, I tend to consult my home library for inspiration here and there, and I had just been flipping through Jeremy Fox's new book On Vegetables, which a lot of people in the industry are liking right now. Jeremy had a great sounding melon curry I thought I could riff on after one of my sales reps mentioned melons were right around the corner.

Like any instinctual cook, I almost never make recipes exactly according to directions, I just pair flavors together and make things my own. The general theme of the recipe is really the only thing I every really follow, but I really need to give a shout out to Chef Fox on the melon soup. Without the beginning flavor combinations in his recipe I would have never thought to add the garnishes that really blew me (and guests/waitstaff) away.

For some reason, I had garnished soups before Zanthoxyllum/Kinome but had used whole leaves and I didn't like the result. The problem is that you need to make sure you chew the leaves to release their perfume to really get the full effect, and with the liquid character of soup, if you just slurp down a leaf you won't taste it at all.

Eventually I had forgotten about the soup and I stuck to putting my Kinome leaves on a fish tartare, since the guests instinctually know to chew tartare, which releases the flavor of the leaves.

I was on the fence about whether kinome leaves or mint would be better on the soup, so first I tried a little of everything with the Kinome leaves, and gave some to a line cook I trust for his opinion.

We ate a bite of the soup with all the garnishes. It was one of the most complex things I'd ever eaten. Salty, sweet, sour, spicy, ice cold, aromatic, it hit all the notes, each time you touch a leaf with your tooth it explodes with the Zanthoxylum's kaffir lime aroma. My cook and I just look at each other bug-eyed, Kinome it would be.

On the different species of prickly ash

Yes. Yes you should be excited, because the flavor hits you like a freight train here. That being said, as I mentioned in my original post on Xanthoxylum, whenever I cook with the kinome leaves, you should know Im using a particular species I've found on the farm in Menomanie where I spend my weekends with my girlfriend. It's flavor is very different than typical Zanthoxylum americanum, whose leaves are not as tasty or lime flavored.

I suspect whatever this species is, it could be more closely related to traditionally used Zanthoxylum plants like Z. simulans, since they're known for being used as an herb in the Far East.

When I put chilled soup on the menu, it doesn't mean it sits in the cooler and we ladle it into a bowl, it means that the soup is kept on ice, and ladled directly into bowls that sit in the freezer. For the right effect, it needs to be shockingly cold, which also means it needs to be aggressively seasoned for it to taste correctly. Salt, spice from the jalapeno, and plenty of fresh lime juice are essential.

To ensure that chilled soups are icy cold during service, I keep the soup in a metal bain marie in an ice bath. Keeping something in plastic will actually make it warmer than holding it in metal since metal transfers temperatures so quickly, plastic on the other hand is an (un)natural insulator.

Lastly, if you'd like to taste this soup, I'll be serving it at an collaboration dinner with Chef Wyatt Evans of Heirloom Restaurant in Saint Paul July 10th 2017.  65$ six course prixe-fixe, with optional wine pairings by Heirloom. See more about the dinner or find tickets here. 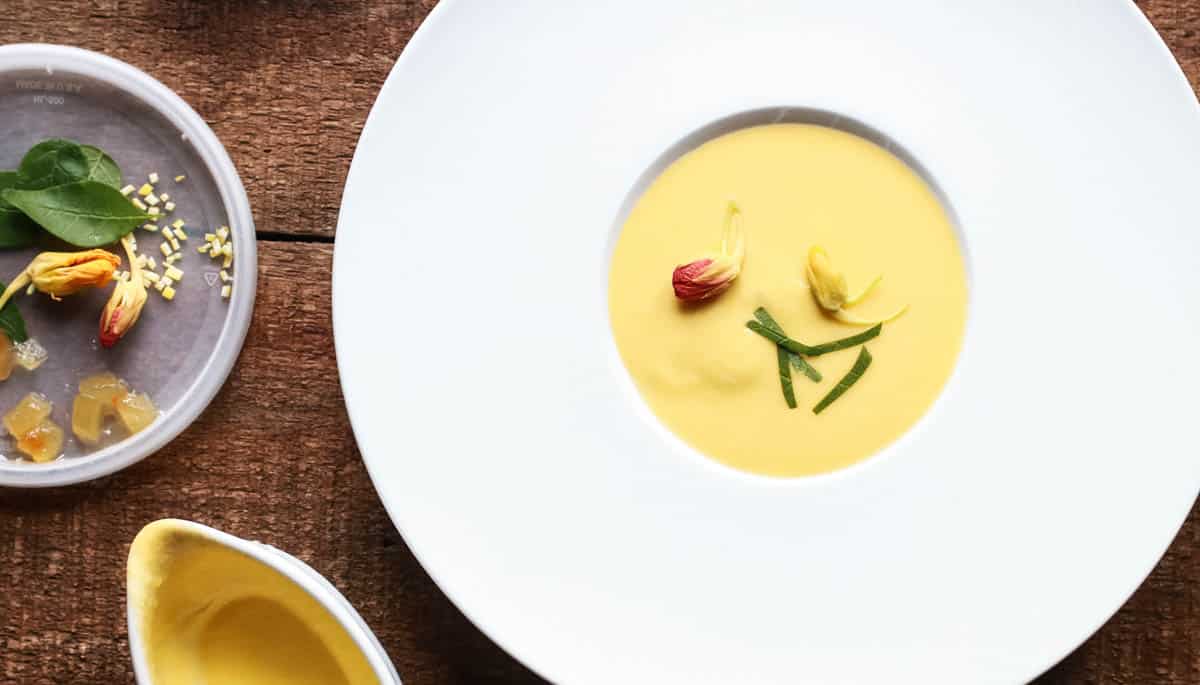 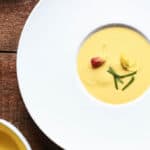 This is meant to be a light, small portion of a larger, multi-course dinner. The soup should be powerfully flavored and rich, so you wouldn't want to sit down and eat a giant bowl, just a cup or two is fine.
Prep Time30 mins
Cook Time26 mins
Course: Appetizer, Soup
Cuisine: French
Keyword: Kinome, Melon Soup
Servings: 8

For garnishing and finishing

Chef Jeremy Fox garnishes his with coconut cream, which you can scrape off the top of coconut milk if you let it sit in a container in the fridge after opening overnight. I just used a few chiffed leaves and some nasturtiums.
« The Leather Veiled Bolete
Poussin With Bolete Pan Sauce »