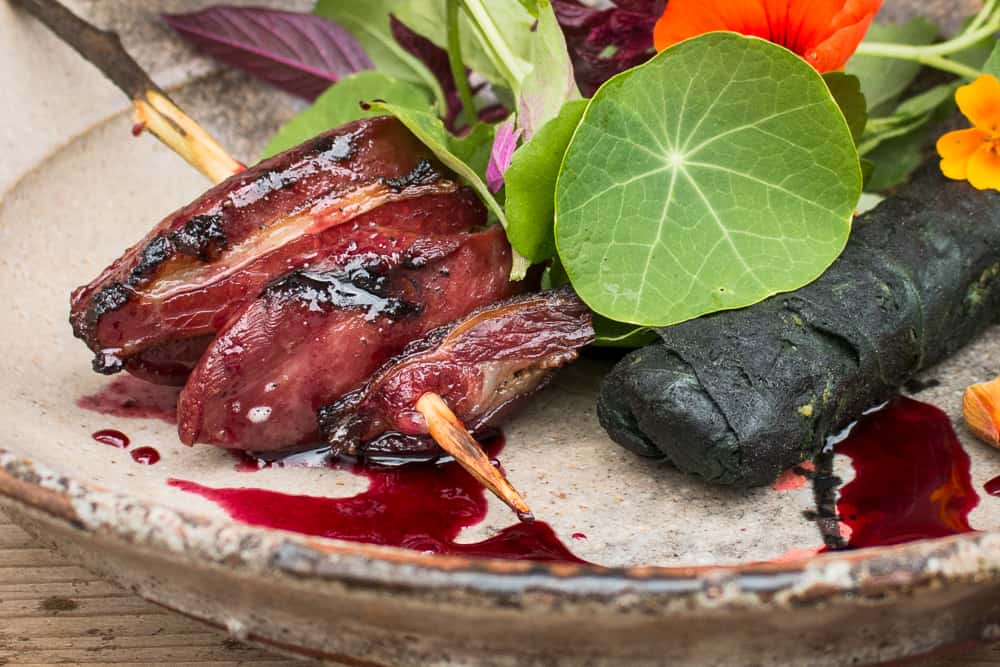 My final entree for the week long video shoot hunting pigeons. I don’t think it looks like a plate of trash meat.

Pigeons were the first fowl domesticated by man, but we’ve moved a long way from what they used to be: companions used for communication, and sustenance. Only 200 years ago, owning a few breeds of “fancy” pigeons would have been seen as a worthwhile hobby like falconry, as well as fashionable, in the Victorian era. In our modern world though, especially in America, we do not like pigeons. We hate pigeons. In fact, we dislike the birds so much that we literally wiped our Native American pigeon (passenger pigeon) from the face of the earth. We made them extinct, shot for sport, like the buffalo.

Be honest. What names or feelings come to mind when you think of them? Rats of the sky? Endless producers of poop? A dirty bird naturally inclined for filth that inhabits cities, feeding off the detritus of man, like a cockroach with feathers? When I see pigeons, I see beautiful, delicious birds with romantic names like squab, palombe, and paloma. I see shiny irridescent feathers, and fast-flying, organized flocks with an almost militaristic, aero-acrobatic talent. 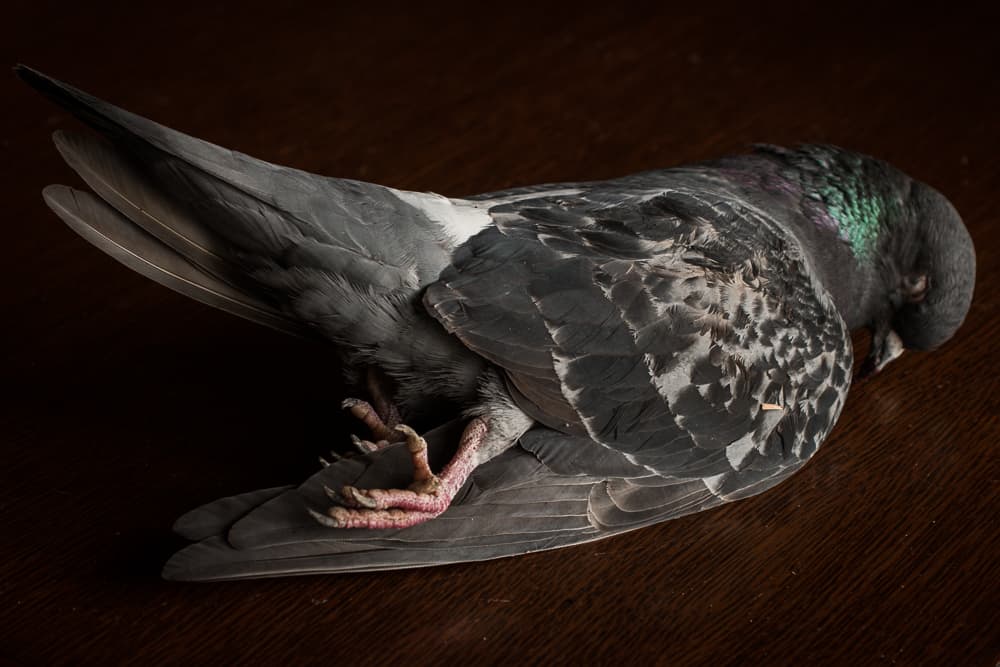 Tell me that isn’t a pretty bird.

We used to rely on pigeons. Humans have raised pigeons for meat for thousands of years, taking advantage of the fact they mate for life, and as such, will keep breeding and breeding, making more and more meat, as long as they have a reliable home in a nest or dovecote.

The meat isn’t just good either, it’s excellent. I used to sell a single pigeon breast with a 2oz piece of pork belly for 32$, as the protein component of an entree, because the price, and sourcing of squab (young pigeon) is so high. Make no mistake about it, pigeon is a luxury meat, and a widely available one at that. If you want to buy pigeons to eat through a purveyor and not do the work yourself, prepare to pay 14-23$ a piece.

Pigeons were also used as a message relay system as they have a strong homing instinct, and the best story I’ve heard about one, (via this podcast) was the pigeon Cher Ami in WWI. An army messenger pigeon, despite having his leg blown off and a bullet fragment lodged in his breast, he still delivered his message, which ended up saving a bunch of Allied troops. He was given awarded the Croix de Guerre (war cross) by the French, but eventually died from his wounds.

Last year I got a call about contributing to Daniel Vitalis’s forthcoming hunting show Wildfed. There’s plenty of hunting shows around, but this one focuses one off-the beaten path meat, wild plants, and mushrooms. To me, that’s kind of the real deal, since hunting is more than bone collecting, so I was excited to help organize the shoot and play co-producer for an episode.

We planned the show for a year, with a conference call here and there and discussions on what to hunt, where to hunt, timing, regulations, shooting permits, etc, etc. I wanted to make sure we had some mushooms, and my september is going to be a little crazy, so we settled on August. At that time, the only stuff we might be able to hunt would likely be things using nuissance permits: squirrels, woodchuck, rabbit, and, pigeons. 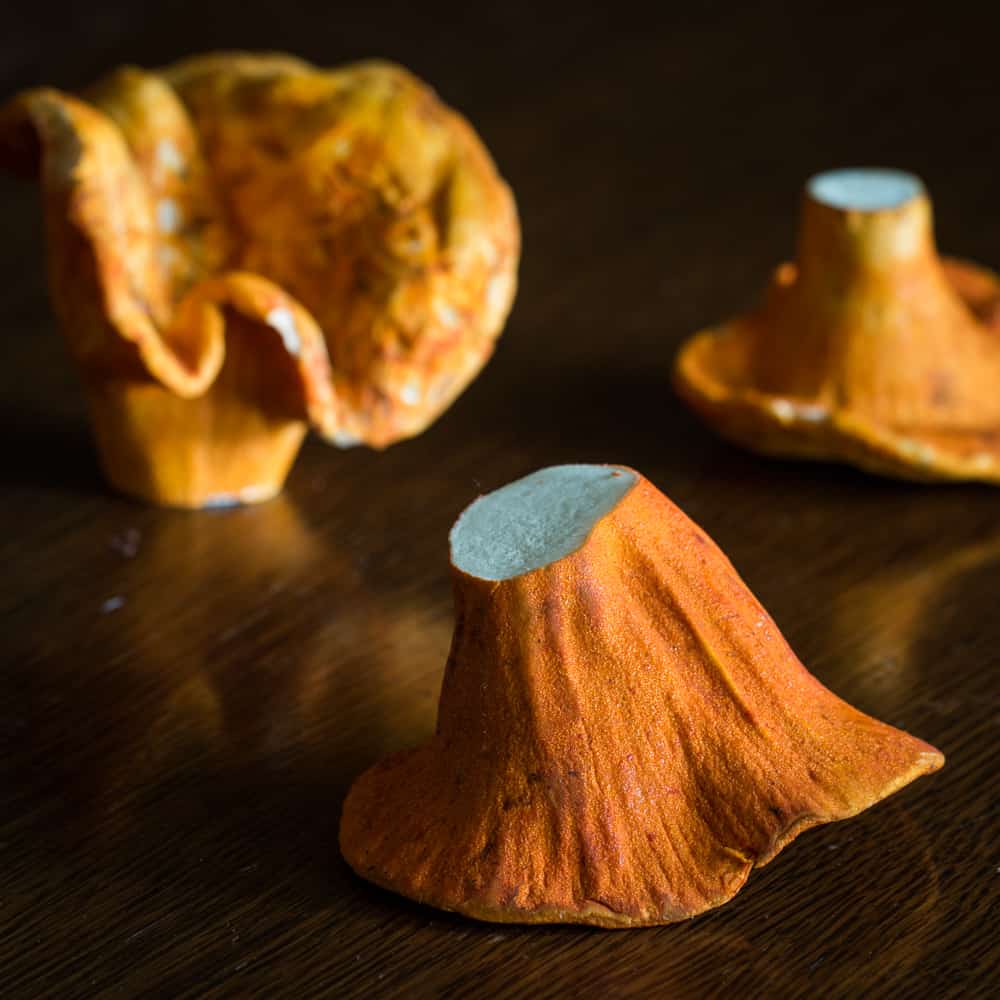 Lobsters would be our quarry for the mushroom element: they’re reliable in Minnesota and Wisconsin during the late summer.

I’d been hunting a few pigeons on the farm here and there, and with all the logistics and planning I could feel coming, pigeons would probably be easier to take than others,a good thing since I still needed to plan a plant and mushroom portion to shoot for the show, and then figure out how everything would work together in a dinner with living breathing people I’d also need to locate.

Being a talent for media productions is one thing, you just show up. Organizing other people, locations, and dealing with seasonal challenges (a special hurdle with wild food) and being talent, is *a lot* of work. We spent 4 solid days shooting, traveling, hunting, and filming around Wisconsin and Minnesota. It was a lot of fun, a lot of work, and we definitely got some pigeons. As you can see below, the only way to see birds when they come home at night to roost, is to bring a light in the barn. Daniel got a nice shot on-demand below. Action! Pew-pew-pew!

For the smoothest filming execution, I needed to know what I was cooking with the pigeons beforehand, and I needed it to look good. Now, most people that hunt don’t hunt pigeons. If they do hunt pigeons, they probably don’t eat them, but just toss the birds in the ditch, garbage, or wherever. If someone does eat pigeons, they likely don’t pluck them, so I thought it would be fun to pluck them, and use the carcasses for soup as a first course, and then the breasts for the main. Daniel did some great work plucking all the birds he shot (I’m a terrible shot with a rifle, even a pellet rifle.) 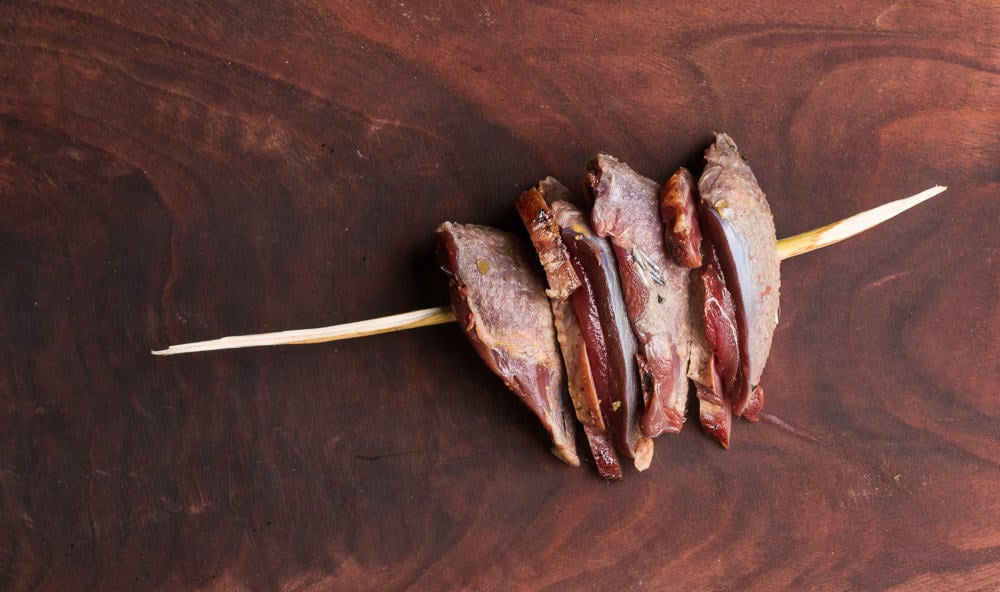 Our pigeon brochette for the dinner. Brined pigeon breasts layered with thin slices of ram bacon.

Fun fact here. The best pigeon I ate all week was not one of the meticulously cleaned ones. We needed a shot of corn in a pigeons crop for match with filming the soup being made, and randomnly, I stumbled on a bird that had been wounded and got away. It died on the floor of one of the barns, and by the time I found it (Friday) it had been sitting in the open for a few days-I don’t know how many, two, three, maybe four. When we opened it up, it smelled fine, so we ate the breasts. It was one of the best pieces of wild poultry I’ve had, and gives weight to the old sayings about wild birds to the tune of: “Nail a pheasant to the barn by it’s head, when it falls off the nail, it’s ready to cook”.

The soup was where the mushrooms could come in. Lobsters would be coming up like whoa in August, and we could be smack dab in variety season: I knew I could make a great soup with just pigeon parts, some herbs, and as many mushrooms as we could find. Eventually we thought, since the pigeons are feasting on corn (the crops are filled with it) and it was the middle of sweet corn season, we’d add some sweet corn too. 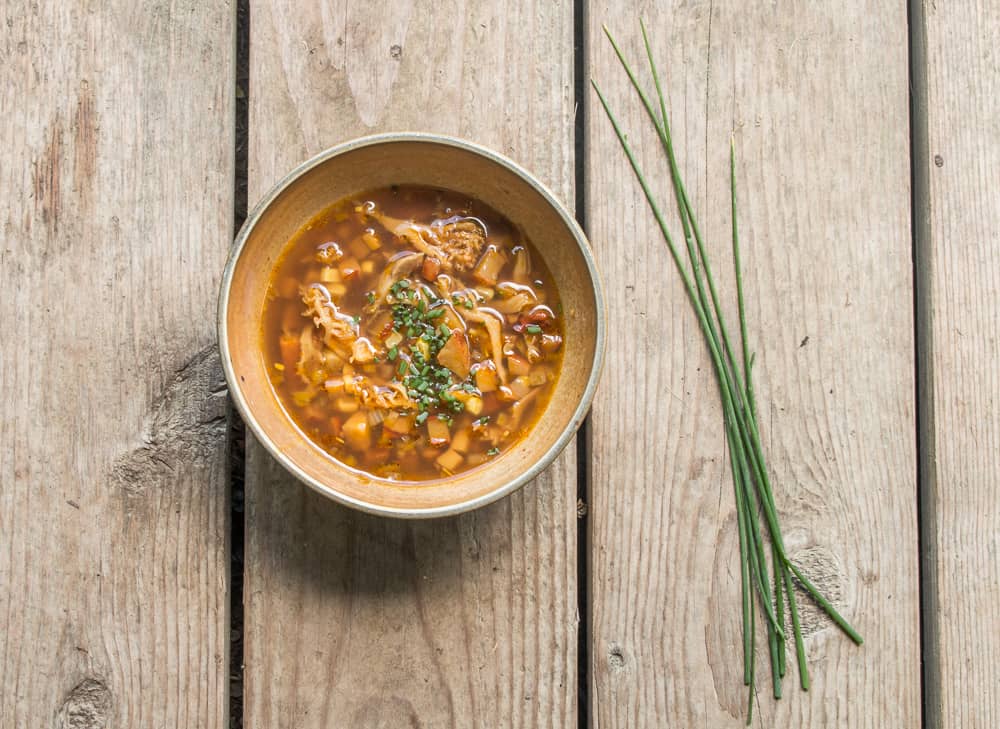 The main course was special, and alot of work. For the pigeons, I took the breasts, and, to hedge my bet a little, I used a chef trick and put them in a light ham brine for 24 hours. Afterwords, they were prepared en brochette, on skewers Daniel and I carved from apple branches, with a slice of bacon I made from a lame ram in between each breast to keep them juicy. Finally, the pigeon brochettes were grilled over wood coals, and napped with a sauce wild black cherries, (Prunus serotina).

The next component was wild greens. I made a salad of wild flowers and greens, and what I call a roulade vert (a teaser from my book) essentially a bunch of different wild leaves stuffed and cooked into clean looking grape leaf rolls. Here’s a quick video of the final dish being plated. I’ll send the word out when the episode airs. 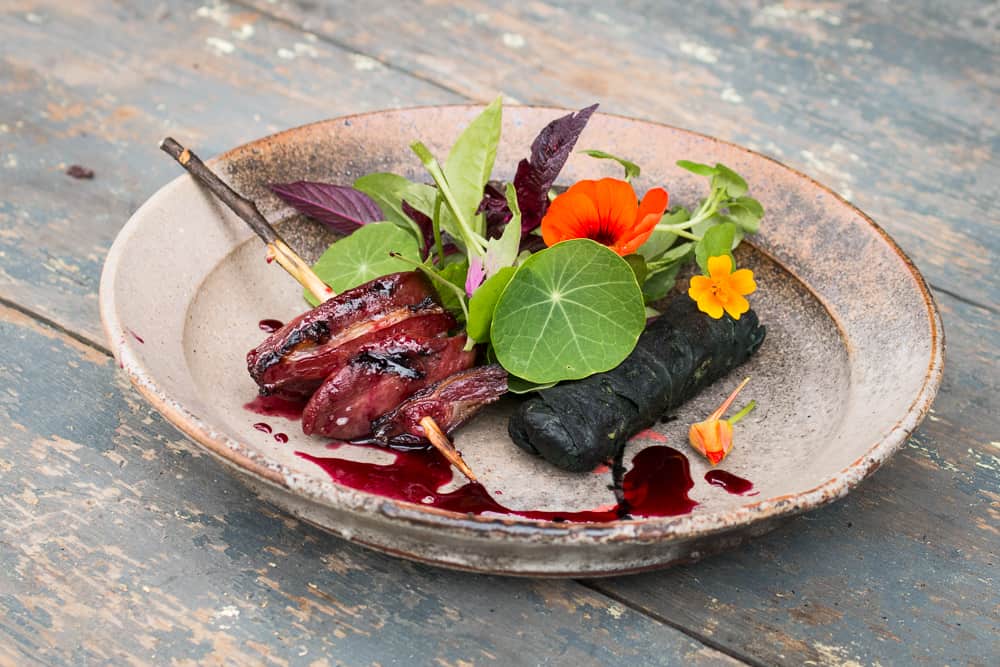 My main for the dinner: pigeon and ram bacon broc.ettes with wild cherry sauce, sunflower rolls, and wild greens

I owe a big debt of gratitude to my friend Andrea Gerasimo, who helped me organize the dinner, and to her Mother, Dorothy, for helping take some of the heat off by making apple crisp. I owe you two a lamb dinner.