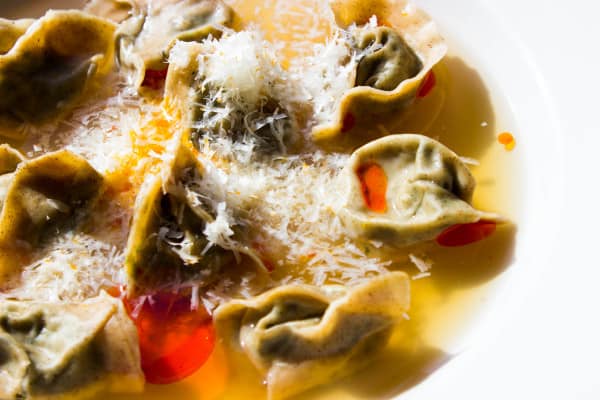 Winter is the time to use up dried goods and preserves. In my pantry, one of the things I had been waiting to experiment with was dried lactarius salmoneus mushrooms, which I discovered a nice little flush of last year. Most of these particular milk caps I found had a little too much damage to eat fresh, as often happens with lactarius species unless you catch them really young.

See some pictures of perfect ones here. Worry not though, milkcaps have a hollow stem, and dry very easily after a little time in the dehydrator. After they are dried you can pretty much do with them whatever you like, whenever you like; they aren't going anywhere. 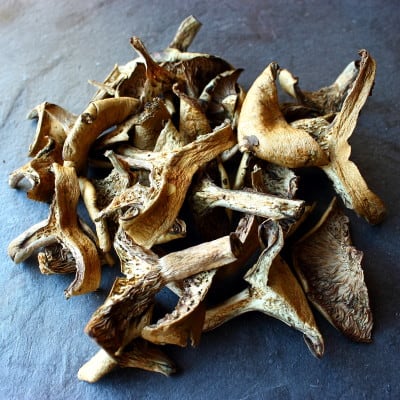 Dried milkcaps. They were too damaged to throw in the pan fresh, so we get to be creative.

I knew that I wouldn't be rehydrating the lactarius and frying them up or stewing them due to their damage, so powdering was the only option.

With the powdered mushrooms, you have a couple different options for using them in the kitchen: you can use the powder to flavor broths and sauces, and you can also use it as a seasoning for meat, or anything where you can make the dried powder adhere to something. I chose to make a broth with the lactarius first, and it makes for a great saffron milk cap recipe. 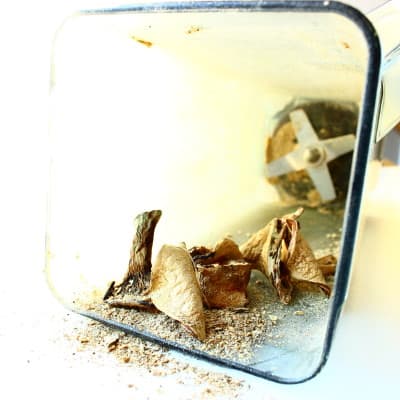 High speed blenders like a vita mix are awesome tools for grinding dried OR wet foods, you can use a small coffee grinder too

To my surprise, a simple broth made with only the lactarius powder and salt alone tasted remarkably like roasted chicken broth, so this is where I started to plan the recipe.

For some reason my mind went immediately to tortellini en brodo, a classic Italian dish of filled pasta in broth. Tortellini en brodo hails from Emilia Romagna, a region in Northern Italy whose historical affluency made if possible for them to create pasta with egg yolks alone, giving it a golden hue. 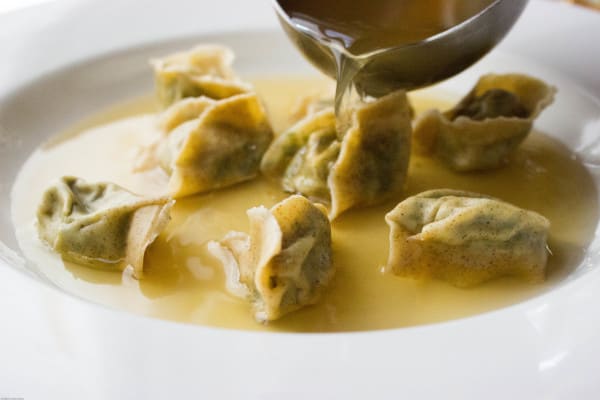 The lactarius tortellini en brodo is a little different though, as well as being vegetarian (sans lobster oil), I wanted to incorporate a vegetable in the filling somehow, and I wanted to showcase the lactarius mushrooms in more than just the broth. Dried mushroom powder can be used like flour a bit, so I added enough ground lactarius to the dough to give it a speckled look, and deepen it's flavor a bit.

Making pasta with dried mushrooms is not going to give off tons of flavor, but it does work, especially if you cook the pasta in a broth made from the same dried mushrooms, just like Italians do bigoli pasta, which they cook in duck broth. The recipe for broth here includes enough for you to do this.

A common filling for ravioli is spinach and cheese, stinging nettles have flavor similar to spinach, but are much more interesting. Just so happened I had some blanched and frozen in my freezer just for occasions like this, so in they went for the filling.

In the end I made a fun little riff on classic tortellini en brodo. Soft tortelli with a filling of nettles and cheese, floating in a rich, clear, lactarius broth. Since I love to float colored oils on clear soups to garnish them, I made one flavored with lobster shells to round out the dish, and add some fatty richness. 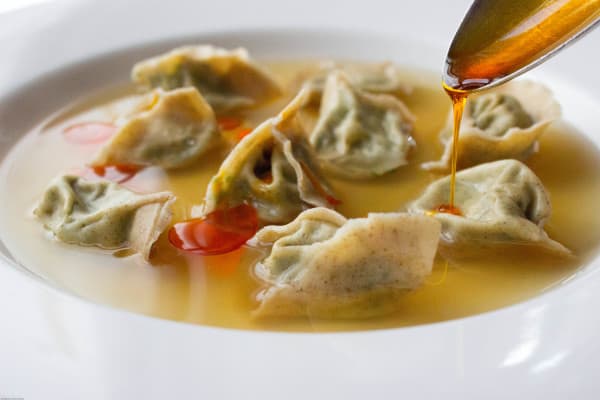 Flavorless oils like grapeseed can take on any color or flavor you like, a verdant green oil made with parsley and tarragon would be great here as well. One made with lovage would be fun too. 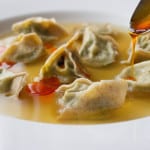 Filling and shaping the tortelli 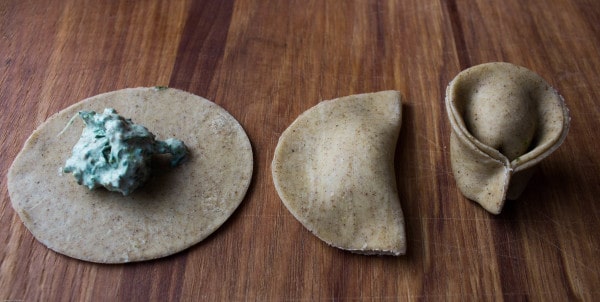 Combine the chopped lobster shells, oil, paprika, and garlic in a food processor. Blend the ingredients for a few minutes until they are nicely chopped together, it will not break down into a puree, you're just trying to smash it all up a little to speed the cooking process. Transfer the mixture to a pan and  cook on low heat for 30 minutes, then chill completely, strain through mesh or a chinois and reserve. (This can be done days ahead of time, and the longer that you let the mixture sit without straining, the stronger it's flavor will be)

Bring a few quarts of very lightly salted lactarius broth to a boil. Add the tortelli and cook until they are done, they will cook quickly, and should be done within a couple minutes. Transfer the tortelli to a bowl, then ladle in some of the broth, about ½-3/4 cup is plenty. Garnish with the lobster flavored oil and the parmesan, then serve.