One of my favorite Spring treats is parsnips that have been left to winter in the ground. During the Winter, the cold converts starches in the parsnip into sugars, and sugars don't like to freeze. The sugary parsnips stay alive throughout the cold season, get harvested in the spring and sold for a premium.

You can always roast them, gratinee, or whatever you like, but the last time I got a batch I was on a strict budget, and in order to make it possible to get some spring-dug parsnips, I had to get a small amount and make soup, since I can get a higher return off the parnsips if they're pureed with broth and a bit of cream.

After I had the soup made, I just needed to figure out a garnish. Something crunchy would be nice since the soup is pureed, and with a white soup I like to float some sort of aromatic oil on top to give a little contrast in color and flavor.

Pumpkinseed, hazelnut, or walnut oil would be fine, but I'd been trying to find a way to use the Acorn oil I got from Sam Thayer, which is really amazing. the Acorn oil is in the same family of flavors as other nut oils, but it's very delicate, and needs the right sort of partner. Putting it on a dish that's aggressive (like something spicy with tomatoes onions and peppers for example) would mean you lose it and won't even know it's there.

I tasted a spoonful of the soup with the acorn oil and knew they were born to be together. You can taste each of the flavors by themselves and together at the same time, in fact the flavors are even stronger, exactly what I was looking for. 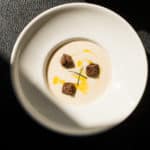