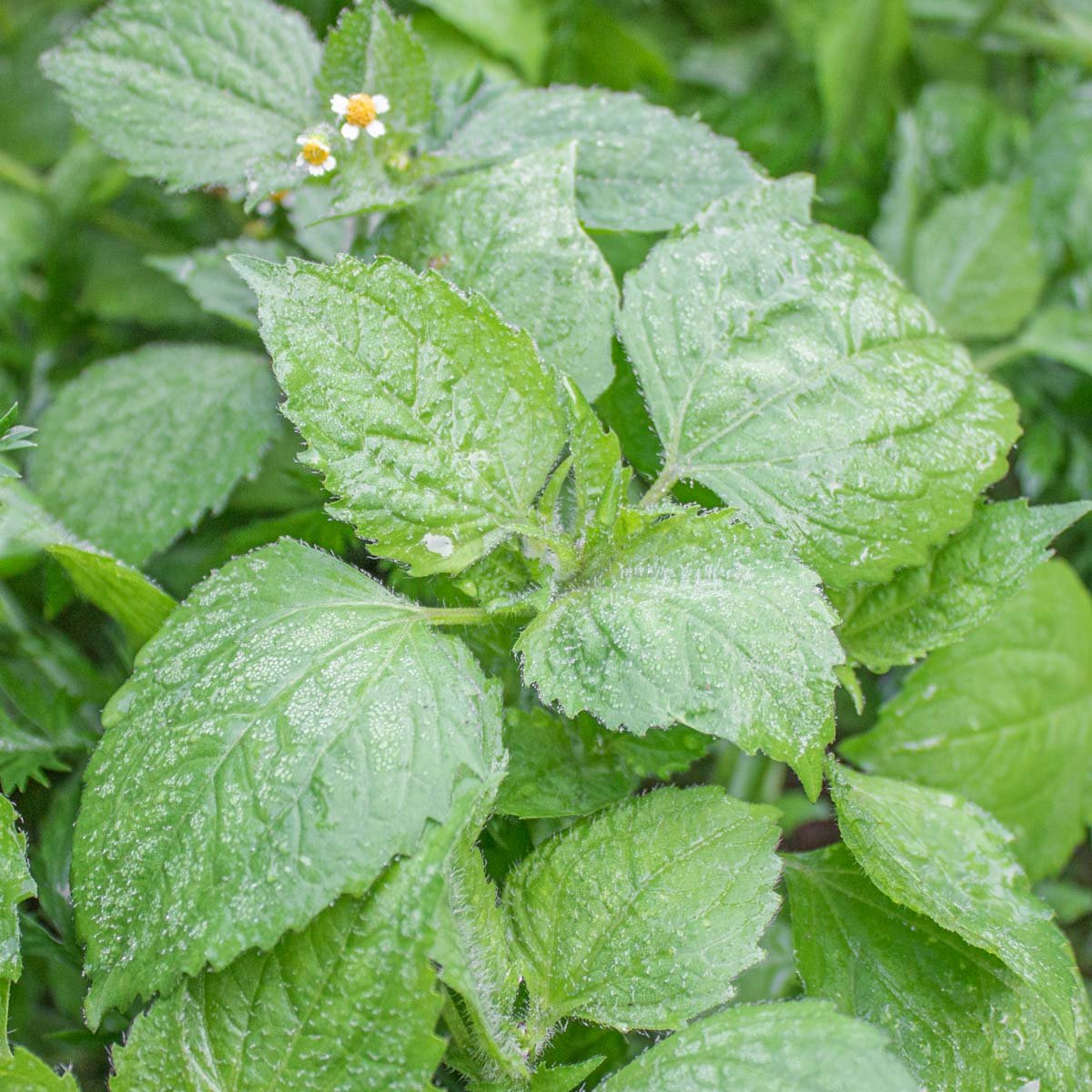 2017 to me was the year of the plant. Working with my network and connections I was able to bring in more wild-harvested product by weight than any restaurant I know of. One week in the Spring I remember I clocked us going through 50lbs of nettles alone.

The hardest plants to get my hands on as far as purchasing were salad greens or those that taste good raw. I wanted to show people how special salads made from wild plants could be. That’s easier said than done though, and convincing farmers to grow weeds is, difficult. If I wanted to do it, I quickly learned I was going to have to pick them myself.

Enter Galinsoga parviflora, also known as the gallant soldier. It’s a member of the Aster or sunflower family, and what was to be the hardest working green I’d met so far. 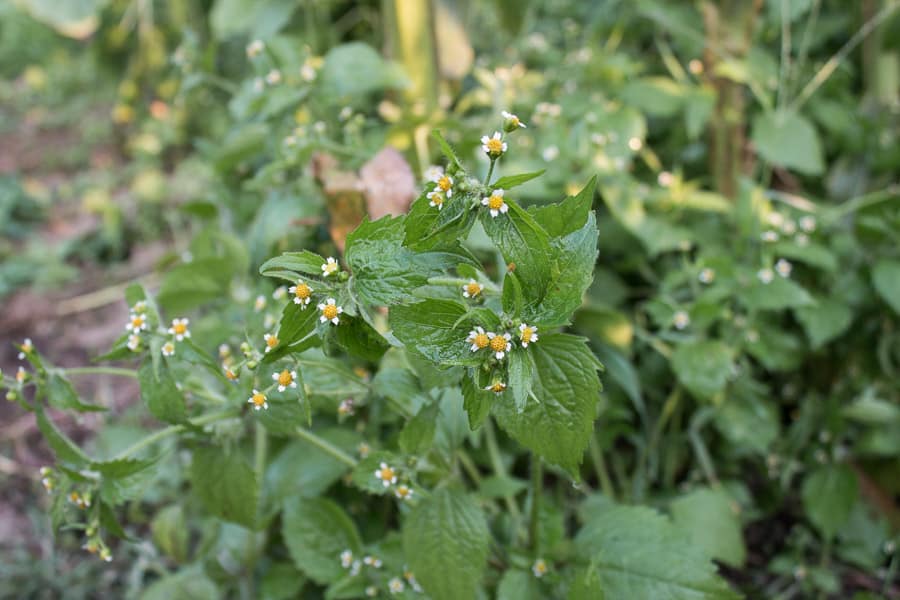 Small yellow flowers with 5 petals, a reminder to me of their sunflower relation. Even the young tips of these older plants will do fine in a salad.

My girlfriend’s mother had mentioned our mutual friend Kenton from ReWild University telling her a plant called “quickweed” or “Frenchweed” was edible a number of years ago. I’d stashed the info to memory, bogged down figuring out what to do with so much lamb’s quarter that year. 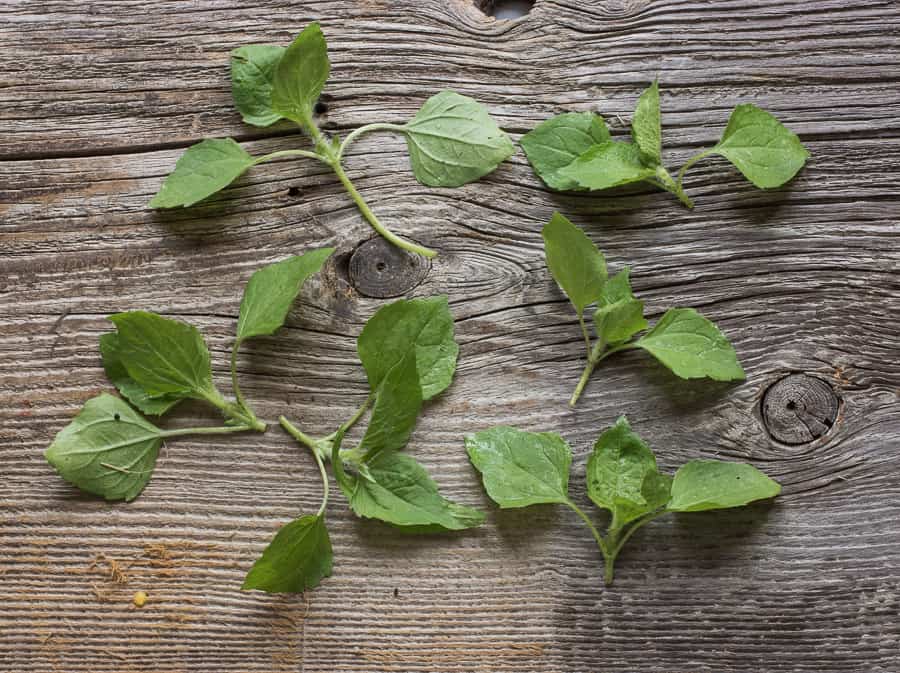 The young growing tips, how I prefer Galinsoga cleaned for serving.

Lamb’s quarter and amaranth are good in salads too, but after I saw how aggressively the Galinsoga grew this year, I remembered to try it, and there’s plenty of reasons it rose to the top of the heap of what I picked for salads:

With the crushing stress of restaurant work only getting worse throughout the year, I started to chuckle at myself when I would bring in the greens and decide what to compose for the salad blend that day. A lot of times the Galinsoga might be as much as 30% or so of the blend, with the rest being purslane, amaranth tips, waterleaf, watercress, lamb’s quarters, chickweed, wildflowers or whatever else I could get my hands on. Like I said, it worked hard for me.

There is one thing to mention about eating it raw though, it’s a little furry. Out of the hundreds of people that ate the salad, I did have two people not like it, specifically because they said it was hairy. I always kept another, tender leaved salad on too, just in case I had to make a different one for someone. But, if I went to a restaurant and ordered something called “foraged greens”, I would definitely expect it to be different. Needless to say, the fuzziness is part of why I wouldn’t serve salads of 100% galinsoga, and when I do it’s in small pieces. If people say you shouldn’t serve salads of it raw, try it for yourself, it tastes a lot different after it’s been blended with other greens, dressed with your favorite oil and vinegar.

The gallant soldier was true to it’s name, and I wouldn’t have been able to supply an entire restaurant with hand picked salad through an entire growing season without it. That being said, I’ll never plant it in a garden of mine after I saw how quickly it mobbed rows of corn and smothered entire patches of pumpkins and squash. It is, like other aggressive “weeds”, dangerously delicious when it’s near garden plants. 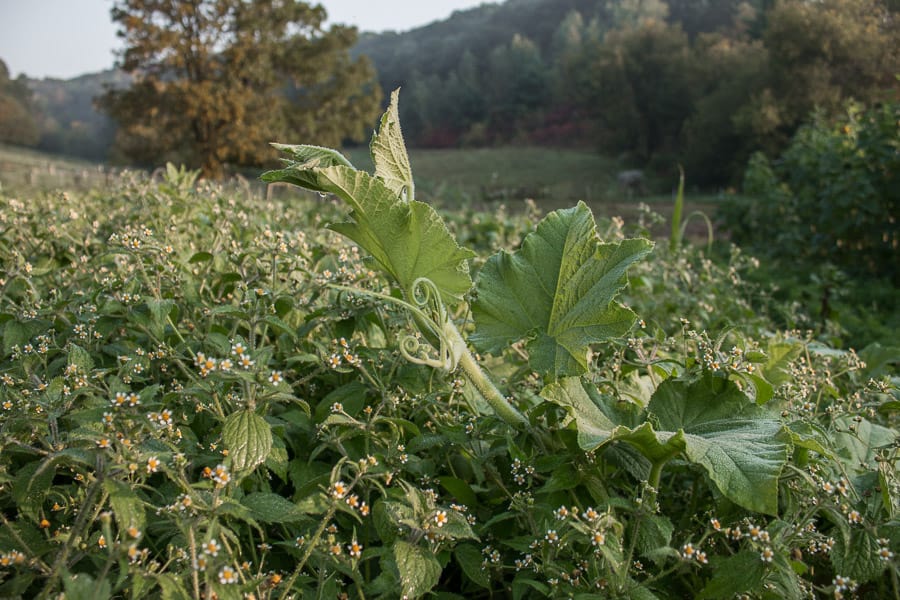 Galinsoga quickly smothers other nearby plants, like these squash straining for light.