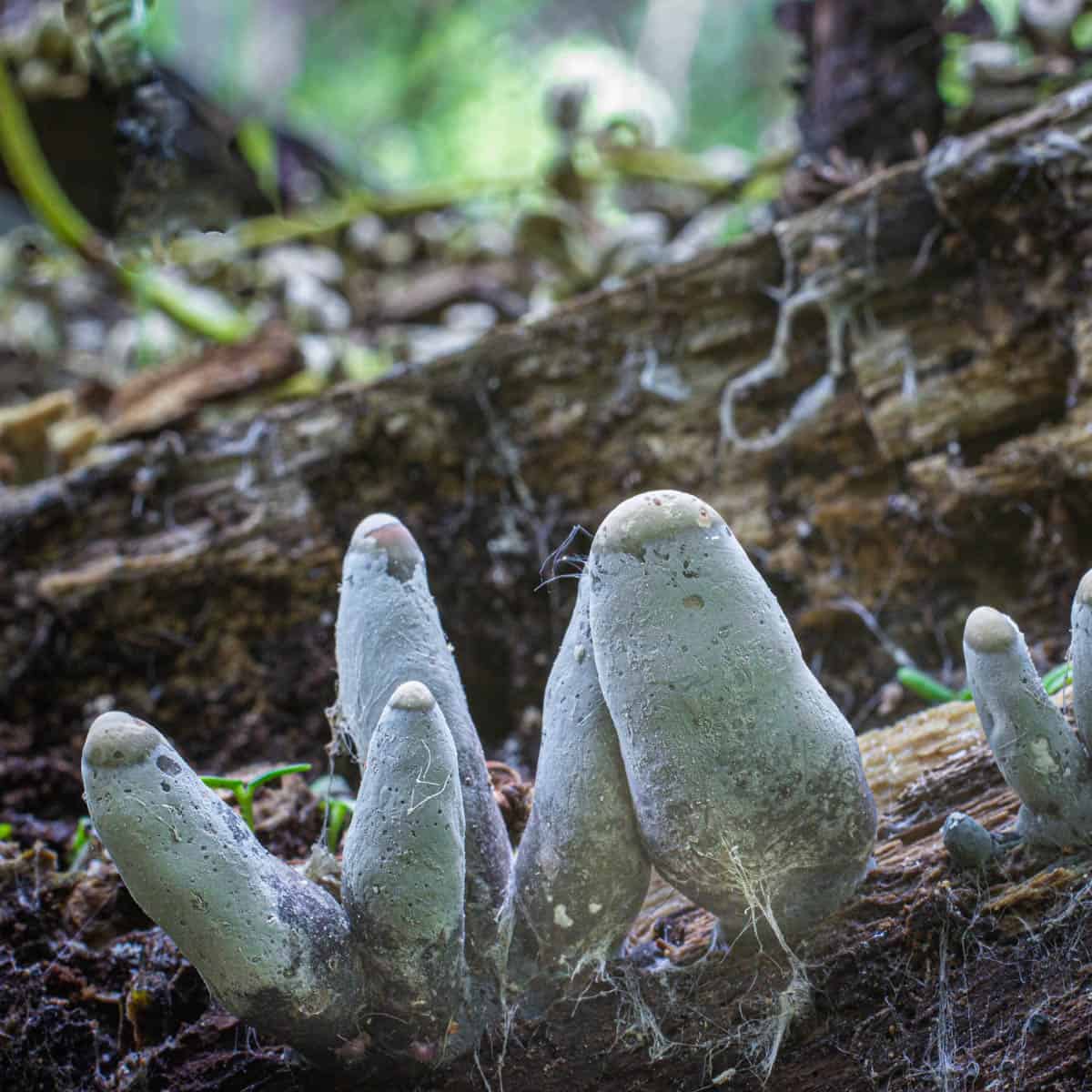 As a chef, and mushroom hunter, I naturally want mushrooms to be edible, and delicious. There are a number of mushrooms, like Paragyrodon sphaerosporus, and the man on horseback (Tricholoma equestre) that have been eaten in the past, and now are not recommended for consumption. Unfortunately, after reading a new article published in India, I have to include Xylaria on that list.

I ate the Xylaria a number of times, and had no ill effects, I rather liked them actually. But according to the article below, the researchers concluded that all Xylaria contain amatoxin and phallotoxin, which are the same compounds you don’t want eat in some of the most dangerous mushrooms in the world.

That being said, it’s frustrating, as I ate these a number of times and had no ill effects at all, which is why I published this post in the first place. There’s a lot of great mushrooms out there though, and unfortunately as we learn more with genetic sequencing and the like, mushrooms may here and there be added to and subtracted from our list of things to enjoy.

My aim with these posts is to provide less scientific sounding descriptions of mushrooms since the scientific language of literature can be an obstacle for people just getting into the amazing, edible sport of mushroom hunting, but we still need to pay attention to science. Please see the new article through the link below, following it is my original post on Xylaria.

Article on toxins in Xylaria

Story goes that last year my friend Sam, who eats all sorts of mushrooms told me about these, he said he tasted some of the young mushrooms, and enjoyed them. Since I’d never heard of them, I made sure to keep my eyes peeled.

Coincidentally, a week or so later one of my friends saw some in his yard and wanted to know what they were, so he dug up the whole clump of dirt and brought them to me. They were the same mushrooms my friend Sam had described, their real name being Xylaria polymorpha.

In the following years, I started to recognize them more and more on my hikes. I generally see them growing around the base of dying trees, sometimes in impressive numbers. 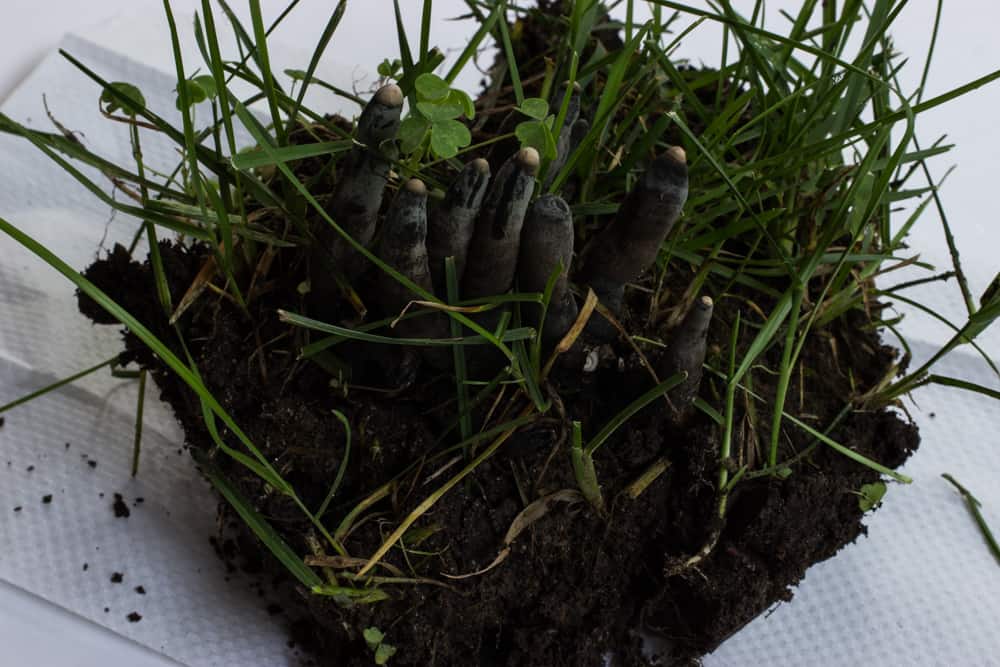 My friend dug up a whole clump of Xylaria and brought it to me, so I had to plant it in the yard.

Some research showed what I expected: they’re a mushroom thought of as a novelty, definitely not thought to be edible.

The little mushrooms on the little clump of dirt my friend brought to me definitely weren’t something I’d pop into a frying pan whole. They were young and fresh. The upper two-thirds were tender, and gave off a nice smell when I cut them with a knife.

Since they’re pretty small, frying them up would make them lose too much weight to really be of use for anything, so I sliced them up thinly and ate small amounts for a few days, to make sure I didn’t have an allergic reaction. They tasted…good and mushroomy. 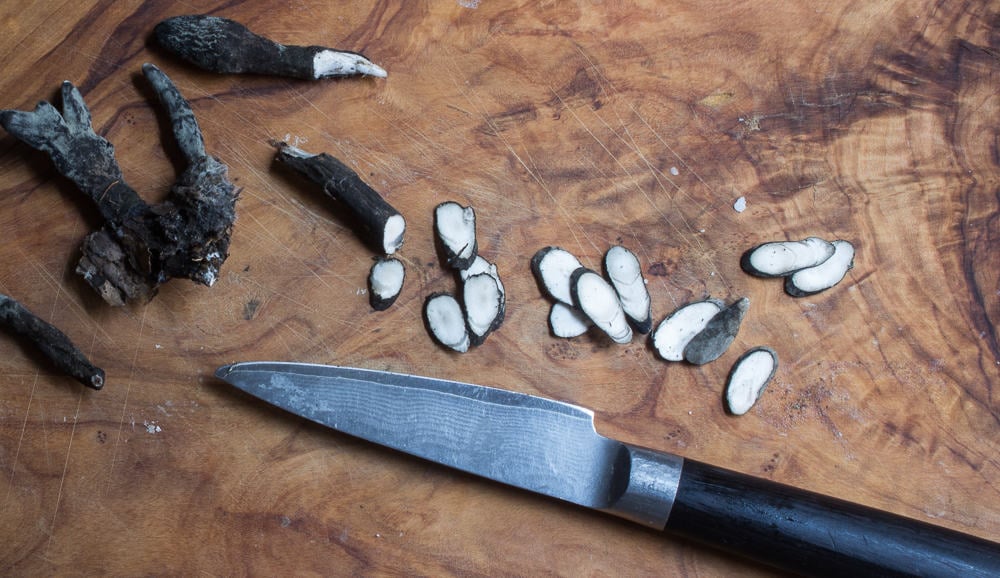 I know I’ll catch a little flak for illustrating them eaten raw. Plenty of mushroomers poo-poo eating wild mushrooms raw. This is partly since mushrooms are composed of chitin, which is difficult to digest, and partly because no one wants to get sick or poisoned.

Cooking helps break things down, as well as making many mushrooms (like morels and Leccinums) safer to eat. There are few mushrooms I’ll eat raw, but I do like the occasional porcini sliced thin with salt and olive oil if I find a clean, bug-less button-a fun way to celebrate a rare find.

I’m not here to enter the raw vs. cooked mushroom debate. It’s indisputable that cooking mushrooms makes them easier to digest, and safer to consume. I will say though, that I’ve eaten at least half a pound of these myself over the past two years raw, sliced thin in salads, on toast, on pasta, and plenty of other ways, and had no ill effects.

Of course, the possibility of them doing something weird like concentrating chemicals in your body over years and years like Gyromitra species exists, I suppose, but you could also argue juniper berries, and bay leaves are toxic too, if you consume enough. All things in moderation. 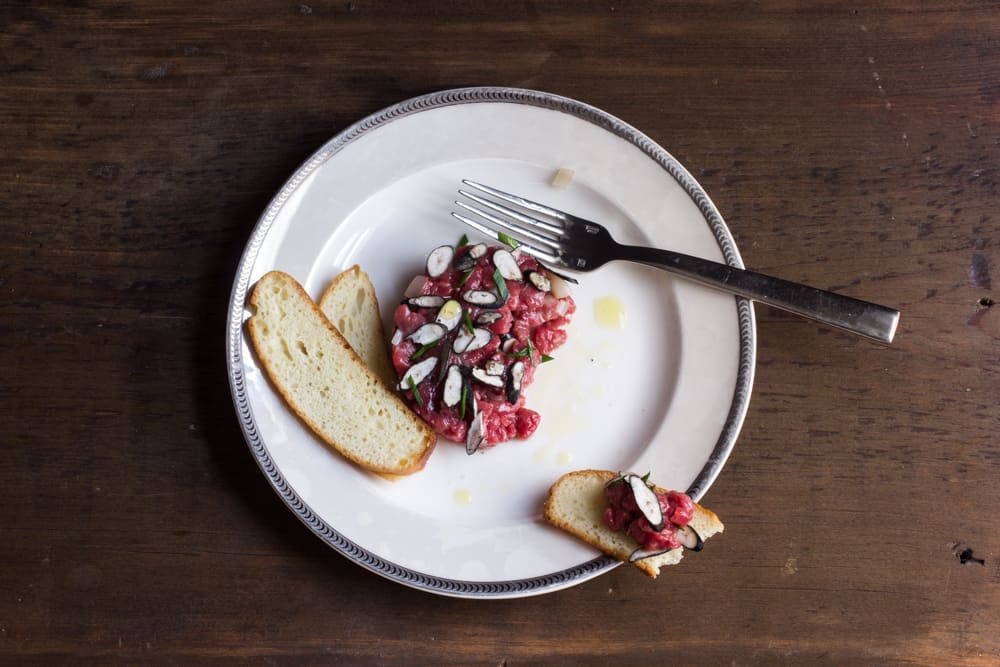 Shaved on beef tartare has been my favorite preparation so far. See a recipe for that HERE.

That being said, here’s a few things worth mentioning about these: