Corning can be a good way to treat deer hearts, and it makes a great venison hash. Read on and I'll explain the details.

At Thanksgiving this year, I was wandering around my girlfriend's family farm in Wisconsin. I went outside to check on someone when I spotted something sitting on the grill outside (it's cold enough at thanksgiving to refrigerate things outdoors, as most people who've brined a turkey in the Midwest know).

Sitting on the grill was large, fresh heart. Thanksgiving coincides with deer season and I knew exactly what I was looking at. My mouth started to water thinking about corned heart, one of my favorite ways to cook that special part of a big animal.

I asked around and found that someone had put the heart on the grill and forgotten about it outside, so I asked politely if I could bring it home to cook, which I was happy to do in exchange for some turkey carving.

You can corn any heart, not just deer

Corned heart and I started a number of years ago when the butcher at the restaurant I worked at that specialized in whole animals spoke with our meat purveyor and got a deal on beef hearts (not a hard thing to do).

I walked in one day to 60 lbs of beef heart in the fridge and started to frantically think of how we could ever use so much before it turned, and without re-freezing it raw. I don't think the butcher knew what he was ordering at all, he was a weird guy all around, I mean even for a 300 seat restaurant we were, that's a lot of heart.

Out of the "bounty" of that delivery I decided try corning them, I thought I was pretty smart, but smart hunters and inventive butchers have been doing it for a long time. The beauty of corning is that  the meat needs to sit and cure in a brine, which  also prevents it from spoiling. The high amount of salt in the brine preserves the meat and puts it in a sort of stasis, while transforming the texture and flavor.

After the meat is "cooked" by the brine, you simmer it slowly until tender. What you're left with is a meat that's been heavily cured and can even withstand a lengthy stay in the freezer just like ham.

In the case of heart and other organs you might corn (tongue, testicles) brining does the double duty of purging a bit of the gamey flavor people associate with organs and smoothing out flavors a bit, just like you might soak livers, sweetbreads, kidneys or brains in milk or salt water before cooking.

What you end up with is a great substitute for corned beef, I've made all sorts of stuff with it: shaved thin it makes mind altering rueben and of course a wicked corned heart hash.

It's also great just shaved thin and eaten with cheese, crackers and butter, but if you're in a restaurant, I recommend the meat be shaved daily on a rotary slicer and kept wrapped tightly in plastic between sheets of parchment because the high amount of iron and lack of fat means the meat will quickly dry and oxidize while it's waiting to go on a charcuterie board or wherever it's home will be. 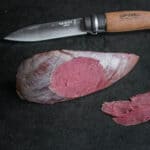 Yield ½ gallon of brine, enough for 2-3 hearts. Put it in hash. Put in in a reuben. Slice it thin and warm it up with stock and butter, then put it on whatever you want.
Prep Time1 hr
Cook Time1 d 6 hrs
Time in Brine5 d
Course: Appetizer, Breakfast, Snack
Cuisine: American
Keyword: Corned Venison, Venison Heart

You can scale this for cooking larger or smaller amounts of hearts, and you can also throw the venison tongues in with them too, they're also great like this.
« Aronia Berry Vinaigrette
Frozen Crabapple Mousse with Black Walnut Struesel »