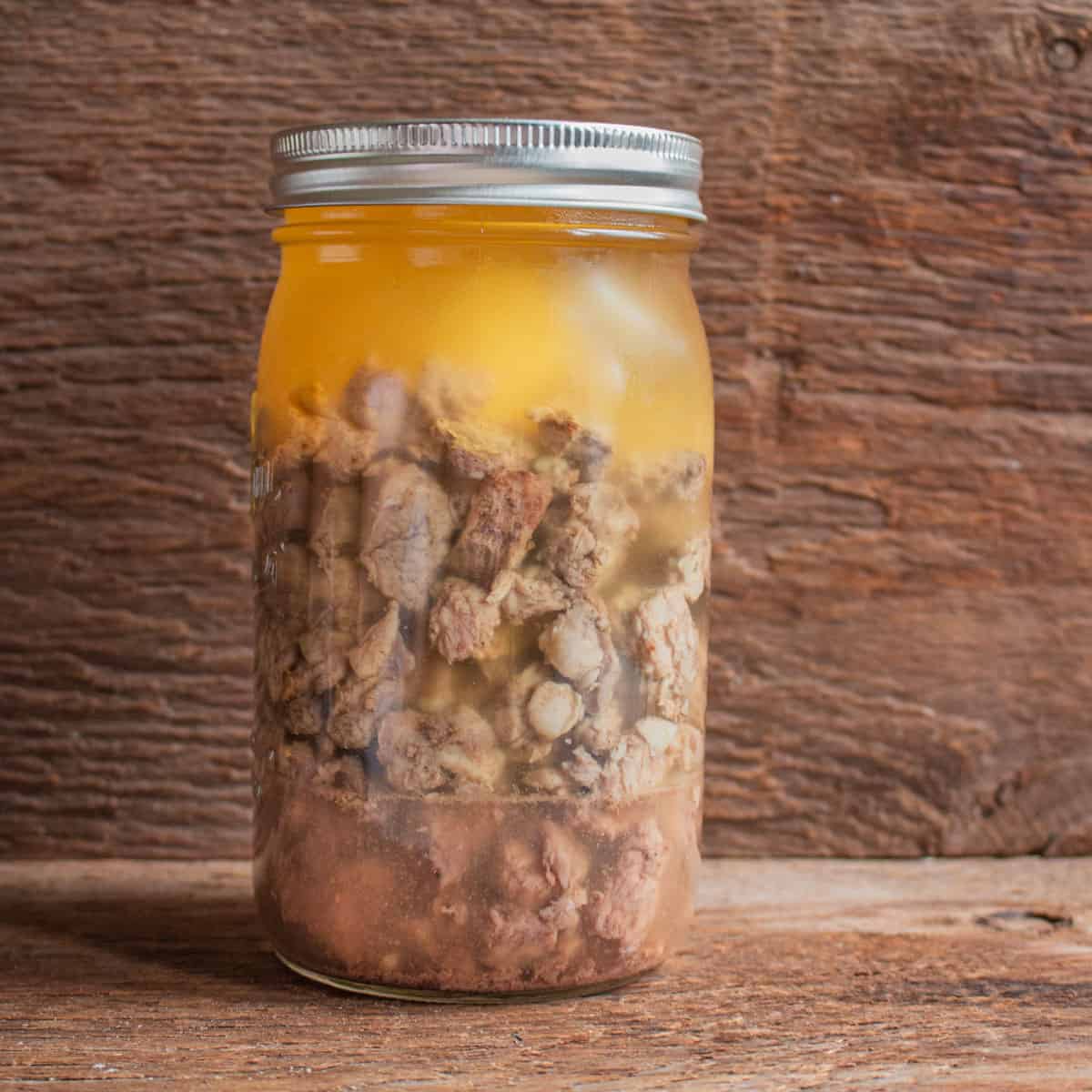 As I've worked with the lamb and goat farm for the past few years, I've loved researching every and all traditional recipes using lamb and goat around the world. Qawarma, or small pieces of lamb cooked in it's own fat, is one of the most interesting I've found--essentially French confits attractive Arabic cousin.

It all starts with animal lard, or, more specifically, lard animals. Typically, as far as animal lard, (besides the fact that the words lard and tallow are foul language in our diet-stupified world) you probably think of pork, maybe beef if you like french fries, possibly, chicken (shmaltz) too if you have some Jewish heritage. Lamb fat though, people don't think of, but the animals have it in spades, and it's good. 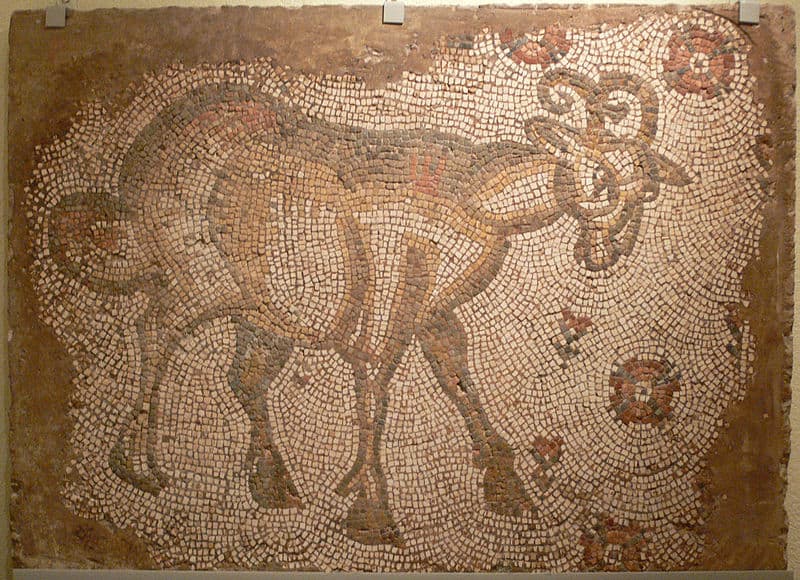 Mosaic of a fat tailed sheep from a church near Antioch. Circa A.D. 475. Photo: Wikipedia commons.

The Wonder of Fat-Tailed Sheep

The pig is probably the greatest lard animal in the world, for the quality, texture, low melting point, and sheer amount some breeds can produce (i.e. mangalitsa) but in areas that eschewed pork like the Middle East, sheep were the lard animal par excellence. Get the bouncy orb of wool out of your mind though, these were fat-tailed sheep. Fat tailed sheep are exactly what they sound like--sheep with fat tails. Enormously. Fat. Tails. Just look at em! 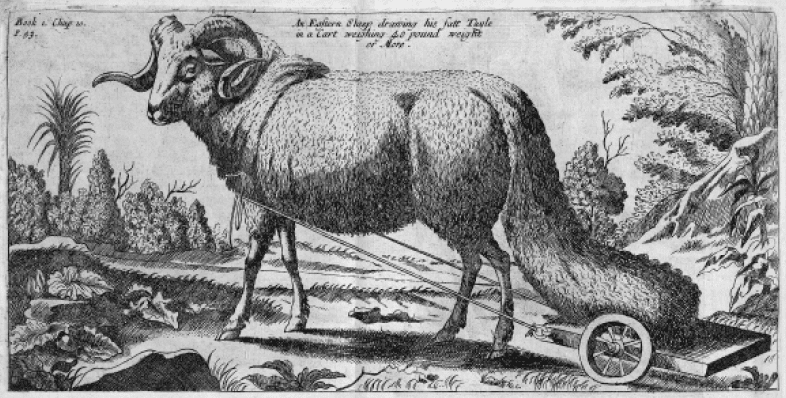 Fat tailed sheep with the custom hauling cart. By Job Ludolphus - A New History of Ethiopia (1684)

The tails were carefully selected over and over to the point where the animals own appendage naturally grew so large that wee carts were made to carry their obese tails around. It's a wonder of selective breeding, and fascinating historical food nugget, even more interesting when you consider that it likely pre-dates confit as every chef knows it by many years. How many I don't know, but for reference, Herodotus wrote about the tails sometime around ol' 425 B.C. and I'd assume references to French confit would start around after La Varenne started codifying things in his book in the mid 1600's. There's also the whole Dark Ages to consider, where the Arabic arts flourished while Europe, along with it's arts and culture, wasted away for a couple hundred years. 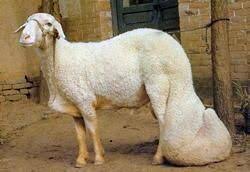 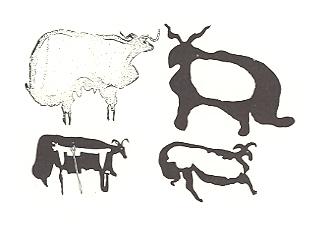 Back to the fat-tailed sheep, eventually, the animals were harvested, and the fatty tails rendered down to harvest the cooking tallow. One of the things that might have been made with that tail is qawarma, also spelled kawarma. The meat and fat were chopped into small pieces, seasoned with salt, then rendered down. The resulting fat would eventually completely cover the meat as it rendered. Once all the fat was rendered, there would still be some chunks of fatty tail left at the bottom, a bit like fatty lamb tail chiccharones, or gribenes, and the whole mixture, crispy bits and all, was put into jars and covered for storage. The large amount of fat, as it settled after cooking pushed air out, and liquid down, and with the removal of air, comes the removal of bacteria--a sort of air-exclusion preservation method along the lines of canning without the hermetic, heat-induced seal. 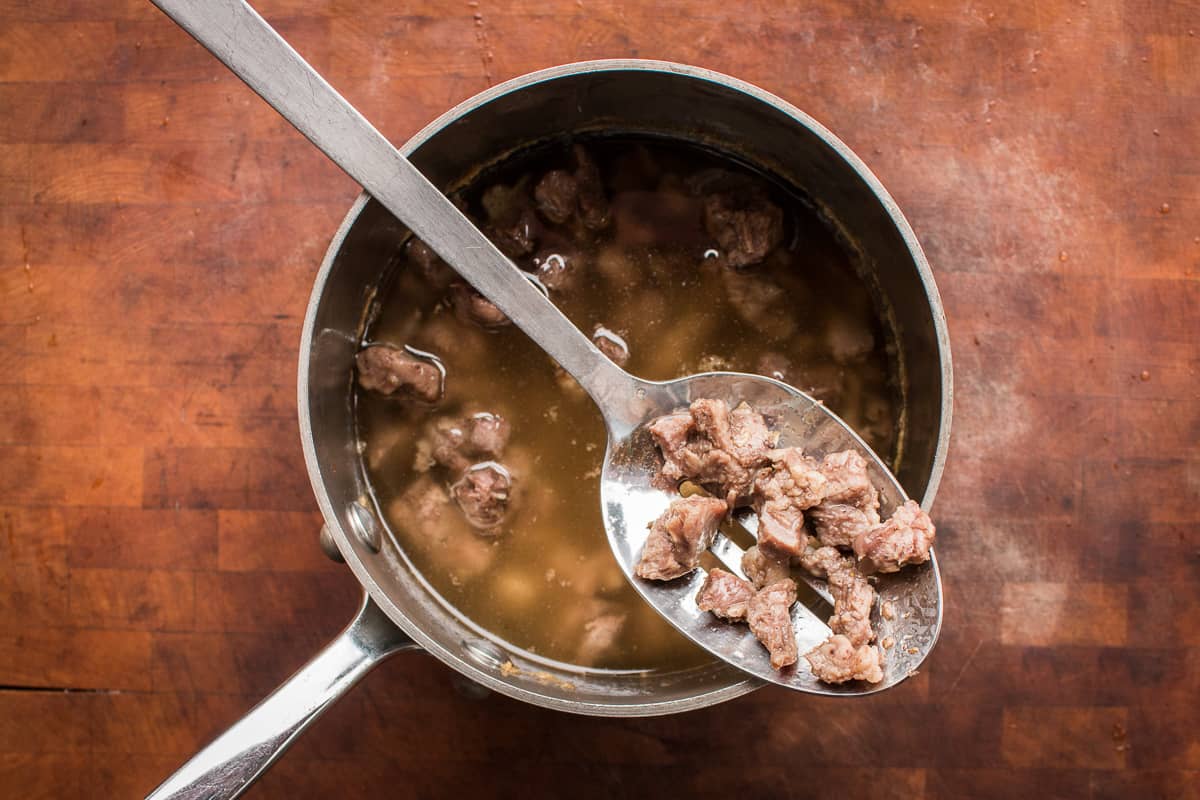 After cooking you'll be left with small, tender nuggets.

From there, the meat would be shelf stable, even in warm environments, as long as the meat wasn't exposed to air, and it's exactly the same thing that happens with the more famous confit, which is just French salted goose and poultry parts, again, cooked in their own lard until it covers them. When the cook wanted to use the qawarma, they could scoop down into the jar, clay pot, etc, and remove some of the salted cracklings to cook with, along with some of the same fat that undoubtedly still clung to the salted bits that, just like confit, would age and develop a special flavor in time.

Qawarma and kawarma, just like confit, are both still made to this day, but, just like how antique recipes in Italy that using feral sea beet greens (Beta vulgaris) now call for chard or spinach, things have evolved a bit over the years. Now the qwarama is typically just meat, not fatty sheep tails, but it's still good. A quick google will show you lots of recipes for serving it warm over hummus, and it's excellent like that, but using the qawarma spelling taps into a different sect of recipes for simple meals that typically include eggs, specifically Bayad ma'a Qawarma (qawarma with eggs). Shakshuka and related, spicy tomato and chili based dishes with eggs are also common--I've outlined a recipe for a simple one below.

Now, just try not to tell someone about fat-tailed sheep next time the subject of lamb comes up! 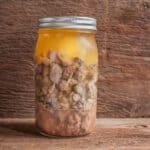 Variation: Ground Meat  I've found references to this being made with ground meat too, so know that you could also substitute that here, which would make portioning out meat and fat a bit easier. 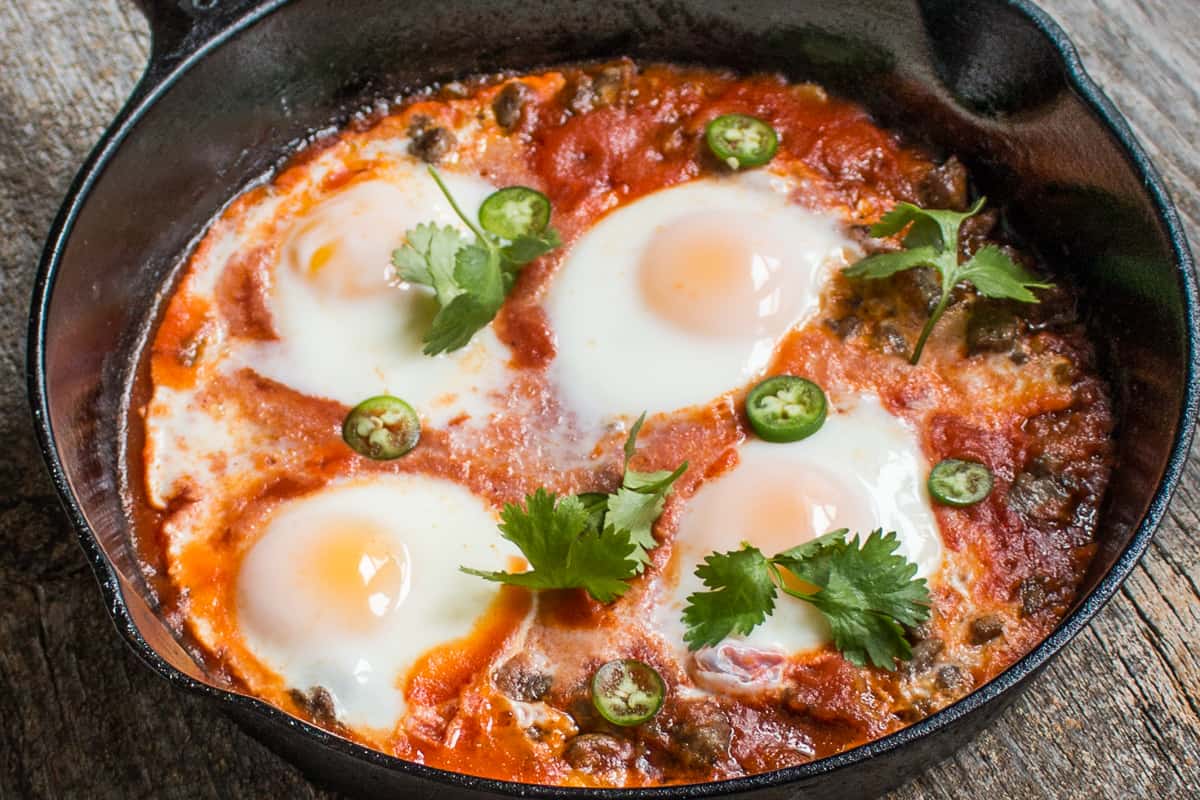 Shakshuka is a great, traditional way to use the confit. 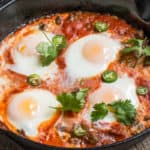 Food and Agriculture of the UN: Fat Tailed Sheep