There are lots of spring ephemerals I love, but, Virginia Bluebells might just be the prettiest of them all. As you're probably gathering, you can eat them too, and, they're delicious! They're one of the very first ephemerals to come up in the spring, and one of the most beautiful harbingers of the green landscape to come.

There's at least two different types of these that I know of, but for the purposes of this post, I'm only referring to Mertensia virginica) since it's the only species I have eaten in quantity.

The other type I know that grows in Minnesota are Northern Bluebells (Mertensia peniculata) found in Northern Minnesota and the North Shore, I would assume they're edible as well, but I haven't tried them personally.

I typically see Virginia Bluebells in areas with wet, moist soil and places around areas that may hold water, like floodplain forests or woods with large streams or rivers nearby, especially in Southeastern Minnesota. Many people also grow Virginia bluebells in gardens.

They're not usually something I have to hunt for if I'm in the right location-they're either not to be found, or easy to find, sometimes pretty thick, especially at the forest edge and places that aren't completely shaded.

While they're not aggressive like some plants that can be in the same habitat, they seem to be able to establish really healthy colonies and clusters in some places, similar to ramps that might be in the same terrain.

They have a wide range over the Eastern United States, but I've read in some places, like Michigan, they're not as common (they're on the endangered list there). So, before you go off to cut a bunch in your local woods, do some research on your terrain and assess their status.

The good part, and I mean the really good part about this plant being edible, is that, of the few people I've talked to about these, some of them didn't know that Virginia Bluebells even grew wild in Minnesota and Wisconsin because they only knew them as a garden plant!

That means, if you want to taste them and don't feel like hunting them down, consider them as an edible addition to the garden or around the peripheries somewhere, especially if you have some spots with partial sun as they seem to prefer a little shade. Morning Sky Greenery has seeds for sale, and Prairie Moon Nursery does too, on occasion.

Like ramps, Virginia Bluebells like to grow in small colonies, so I've been modeling my harvesting techniques after how I harvest ramps, that is, I thin a couple juicy looking plants from the areas where I see the plants are growing the thickest, and after I'm done, I can't even tell I've been there.

The plants are delicate, so much so that I worried the first time I harvested them that they would wilt down to nothing sitting in a bag for a bit afterword, but, just like majority of other wild greens, once I got home and soaked them in a big bowl of cool water (the leaves naturally seem to repel water, which is nice for drying) they came right back to life, as if they'd just been plucked from the ground.

The fun part. It's rare to find a plant almost as tasty as it is beautiful, but these are an example if there ever was one. Virginia Bluebells are in the Boraginaceae, along with the namesake plant (borage) which has a long history of consumption in Italy and Eastern Europe. Comfrey and Honeywort are also in the same family, although I don't make meals of comfrey sans a few flowers here and there.

One taste of a raw leaf of Virginia Bluebells will show you the relation through flavor. Like borage, bluebell leaves and shoots have a unique, green flavor some might find strong raw. Some people might describe it as mushroomy, I'd probably call it aquatic as I don't like the term fishy. The aquatic quality is more concentrated in the leaves, the stems, which can comprise the majority of the plant, depending on when you harvest, are much sweeter and milder than the leaves.

Don't worry though, the aquatic flavor isn't offensive, it's just interesting, and, after a very quick steam or literal dunk in boiling water, all I taste is delicious, tender green.

After cooking the plant will have little bitterness to it, but it's a good, gentle bitter—nothing comparable to dandelions, or the marginally edible (at best) garlic mustard or yellow rocket, both of the latter aren't worthy of being in the same basket as Virginia Bluebells, let alone the same plate.

Virginia bluebells, unlike a lot of other leafy greens, are almost more of a stem vegetable than leafy green. With their stem that can get quite long (up to a foot or more) during the season, they have a lot more texture than many of the plants available at the same time.

At the stage pictured here (about 4-8 inches) they're one of the most delicate shoots I've cooked, and need only a few moments (30-60 seconds of steaming) to reach a perfect, tender chew. Older shoots may take an extra 30 seconds, but not much longer. The recipe with a sauce made of nuts that follows here is similar to Italian and Slavic recipes for borage I've seen. If you get the chance, do yourself a favor try this beautiful plant for yourself. 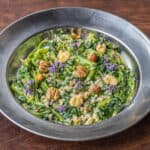