Trout lily is a delicious, beautiful, "edible" plant foragers should know, with a few important caveats. Read on and I'll explain the do's and don't with this plant.

A spring ephemeral, along with other plants that enjoy the same habitat like ramps and toothwort, trout lilies, also called fawn lilies, are common and often widespread in forests with rich soil where I harvest ramps in Minnesota and Wisconsin, especially the maple sugarbushes of North West Wisconsin.

People unfamiliar with the plant often confuse it with ramps/wild leeks, which is part of the reason I'm describing it here, since getting just a few of them on a plate could be an issue if you or someone you serve food to is sensitive to them.

Before you read more about this beautiful green, know that I do not recommend serving trout lilies to the general public since they can cause emesis and prevent conception.

But, I do eat some every year myself, as do plenty of other people I know. Don't let my disclaimer stop you from sampling them, just be smart.

I've only eaten two different types of trout lilies, with both of them growing mingled together.

Erythronium propullans, the dwarf trout lily, is a rare variety, endemic to areas of southern and south-eastern Minnesota, and should not be harvested.

I have yet to see Dwarf trout lily, but the protected status is worth mentioning since all the trout lilies look alike.

There should be at least 32 different species of trout lily around the world.

Like some of the other ephemerals, trout lily has both above and below-ground parts (a small corm).

While you can eat the small corms, personally, I only harvest the leaves of trout lily since it's the most sustainable way to harvest them, and I have a hard time dedicating effort to gathering something so small when the leaves are often widespread and plentiful.

Harvesting the leaves is just easier, and, c'mon, just look at how beautiful they are!

If you look online, you'll see that trout lily is referred to as an emetic. I can vouch for this firsthand, although it's never made me sick.

Trout lily is also referred to in different ethnobotanical texts I have as a traditional food for different Native American tribes. How can a plant be edible, but also make you vomit?

I'm not a botanist, but I've worked with this enough to give you a little guidance that will be helpful.

Some people seem to be able to eat trout lily without issue. I've eaten handfuls of leaves in salads and by themselves, and never had a problem.

The volume of the leaves eaten seems to be important, if I ate an entire bowl of them, I might throw up, but I've never eaten more than 5-6 leaves in a salad. Practice moderation with these.

On the other hand,  some people seem to have a very strong emetic reaction from eating just a few leaves in a salad.

I'm unsure if the issue is from one of the two specific species I've eaten that are pictured, but the wide range of sensitivity means that unless you know someone can handle eating a few leaves of trout lily in a salad before you serve it to them, I think they should probably be left in the woods.

Trout lilies are a beautiful, delicious wild green, but getting sick from a salad made with wild plants is a sure-fire way to scare newcomers, many of whom are probably wary of wild foods already, from trying other things.

I mentioned it already too, but the plant can apparently also interfere with conception, so, while I wouldn't encourage as much caution with them as other plants I know that are abortifacients (that can end a pregnancy) like carrot seeds, it's still a good thing to know.

Like Japanese Knotweed, I didn't read about trout lily from a foraging guidebook, I learned about it from reading books by one of my favorite chefs: Michel Bras.

One of the most influential chefs of the turn of the 21st century, Bras is famous for his native knowledge of the Lagouille region of France and his use of wild ingredients alongside cultivated ones, a skill he showcases in his famous, daily-changing first course of his restaurant called the Gargouillou.

A dish composed of the season's finest, the Gargouillou might include anywhere from 30-60 individual ingredients.

The Gargouillou has inspired chefs around the world for years, and continues to, even though Bras has since passed the reigns of the restaurant to his son Sebastien.

Looking at the range and habitat, I'd wager that the wild species served by Bras in his restaurant was Erythronium dens-canis, but I can't be 100% certain there.

While you could probably cook trout lily in a pot with other greens, they're so beautiful raw that I hardly see the point. Whenever I enjoy trout lily, it is just a few leaves tossed into a salad or used as a garnish. 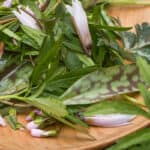