I knew a couple people had spoken about these things called aborted entolomas when I started picking mushrooms, but it took me about a year to be confident in recognizing them. Information about their edibility is out there, but there is not tons of it. Guides from the Pacific Northwest did not discuss it, but eventually I began to put together a little picture about them from hunting on my own. I discovered a mushroom that is very mild, but when caramelized and browned takes on a great, delicate flavor that store bought mushrooms could never even dream of.

I have confused a number of people when comparing this mushroom to shrimp. Just to clarify, the flavor of the aborted entoloma is similar to mushrooms. The texture is shrimpy, or something like you might expect in a plate of shellfish. To amplify this texture, I like to serve them alongside fish, similar to the idea of pairing lobster mushrooms with venison I mentioned a little while ago.

This little recipe is a great example of how you can be playful with the texture of things. It is also a glimpse of the many, ways that entolomas could be served.

When I made this, I was using up the last of my heirloom tomatoes of the season, I had some green zebra tomatoes and a small golden roma. I knew I wanted to make something with fish and entolomas, and I remembered one of the old shellfish combinations that we used to serve at the ill-fated Il Vesco Vino restaurant in St. Paul.

We would make a spicy fra-diavolo ("devil" sauce) served with pasta, it was really simple, and very popular. This is a tweaked version that is much lighter than the original that we made back at the restaurant. Unlike the other ragu, this one is not too spicy, but it definitely could be if you wanted it so. I wanted to design a simple fish ragu that was more wine based, with soft flavors. 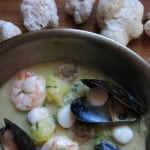 If you want to serve with pasta, 1 oz of dried spaghetti could be sauced by this recipe for a light entree, served with a salad on the side. Or spoon it over ½ cup of cooked, soft polenta, or in a bowl accompanied by some grilled toast.
« Wild Mushrooms With Breadcrumbs, Garlic, And Chili
Foraging and Cooking Matsutake or Pine Mushrooms »