Milkweed silk cooking in a little butter. The end result tastes a bit like cheese.

Studying how plants we can eat grow and change, to me, is fascinating. When we’re talking about wild plants, it gets even more interesting since some parts of them are unexplored, or in the case of milkweed, are still thought of as poisonous by a lot of people.

Milkweed sits at an interesting convergence of inedible and edible foodstuffs. It’s all about the age at which you harvest. The seeds aren’t good to eat when mature, but the young pods that eventually contain the seeds are edible (and taste great) when they’re very young.

Even among professionally trained chefs used to working with all sorts of obscure ingredients, I often see milkweed pods prepared improperly, most of the time this is due to cooking larger, older pods under the assumption that bigger is better, since large pods look like they’ll be great to stuff, but the complete opposite is true.

When the pod’s outer green skin is past the point of being good to cook whole, or cut into slices, there’s still a part of it you can eat: the immature seeds and pre-silk. But you need to move quickly, the silk inside the pod will eventually become dark, tough seeds and stringy silk that you don’t want to eat. 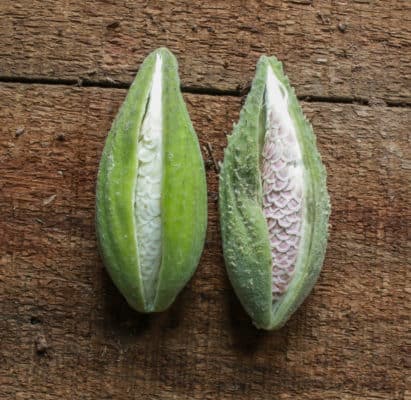 You might be thinking: “how, and why did anyone ever think of eating this?” That’s a question for my friend Samuel Thayer. His books on wild food transcend the typical format of most wild food guides.

Instead of trying to stuff as many plants as possible into one book, Sam’s books go in depth on smaller amounts of plants in great detail. He’s shared numerous times parts of plants we can eat not even described in the most authoratative wild food literature I know of. As a chef new ingredients are like Christmas presents, so Sam’s books are nothing less than groundbreaking. 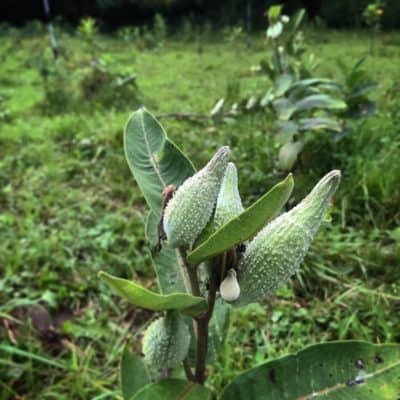 Some of these pods are young enough to cook and eat whole, some I may pick apart to remove the silk if they’re mature.

Back to the silk. As far as harvesting goes, here’s what I’ve found works for me: while I’m gathering milkweed pods, I pick very small ones and larger ones where I can peak inside the outer green skin. If the seeds and silk inside the more mature pods are pure white,I take them. Later in the kitchen I separate out the pods that will be cooked whole and those I’ll remove the silk from, discarding the outer green portion which is too tough to enjoy.

Cooking with milkweed silk has been an interesting project. The soft silk and immature seeds can be pulled apart with your fingers, and when cooked, have a texture that’s eerily similar to melting cheese. Although the fibers don’t break down completely, they’re not unpleasant to eat, it’s a little hard to describe. I don’t eat the silk raw, but a little bit won’t hurt. Know that some people have adverse reactions to eating large amouts of milkweed, or raw milkweed. 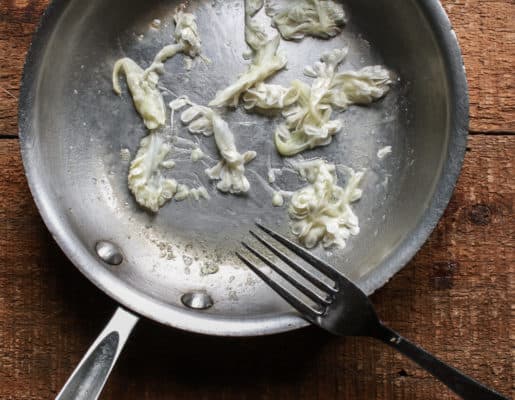 Breaking the silk up in the pan with a fork.

The silk has a verdant, vegetal milkweed flavor similar to the pods and buds, that, while I don’t find off putting at all, might seem strange to people, especially those unfamiliar with eating milkweed. To combat the strangeness and ground it in a familiar context, I like to serve the cooked silk with other things that are in season, and since the silk is ready to eat at the peak of summer, it’s not hard to find a great combination of vegetables to go alonside. Here’s some other ideas for working with them.

For an event I did last year, I made mousse out of the silk to bypass the texture, then served chilled quenelles of it with a little salad of corn, tomatoes, flowers, herbs, nasturtiums and a drizzle of flavorful oil. It was my favorite thing I’ve done so far with it. 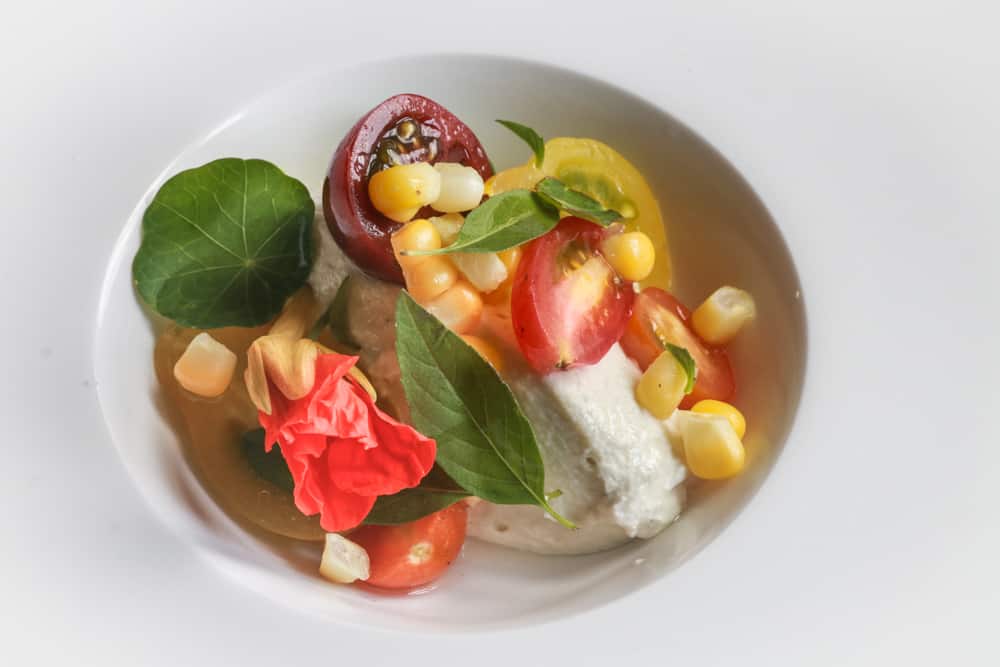