Meet the most expensive vegetable in the world. Hop shoots are the young, tender shoots of hop vines, and they taste a bit like beer meets asparagus. I haven't done experiments with different varieties, so for the purposes in this post I'm referring to common hops or Humulus lupulus that I harvest wild around Minnesota and Wisconsin.

I was introduced to hop shoots when the University of Minnesota dropped some off for us at St. Paul's Heartland Restaurant and Farm Direct Market where I was sous chef. They had some program with the plants and would bring bags of the cut shoots by after trimming for us to put on the menu. I remember not being too impressed looking at the puny bags of shoots sitting on my station at the restaurant--there wasn't much there--a few shoots per person. But good things come in small packages. Hop shoots could possibly be the most expensive vegetable in the world, and, according to this site: The first 2 pounds are sold by auction and could get as much as 500 Euro per pound! For a vegetable.

The shoots are small, but have a great flavor, as well as an interesting look. They're also easy to harvest, and when picked, actually help the hop plant grow more vigorously, just like cutting back the young growth of herbs. Just last week I cut most of the shoots off of a plant I know (growing on the side of the house) and the next week, there were even more that had grown back to take the place of the ones I'd cut.

Looking for wild (and tame) hops

You probably won't have to venture deep into the woods to find these either, as plenty of places use them as decoration--look for places that use them in landscaping, or grow some in your garden. But I do see them in the woods, more specifically on the edges of woods. Here's a few pointers.

For the biggest harvest, you'll want to find a good wild patch. In my best spot, I can easily harvest pounds in an under an hour--and that's a lot of hop shoots.

Wouldn't you know it, places that grow lots of hops for beer might have a habit of eating the shoots. In fact, before I cooked my first hop shoots in a restaurant, I read about them in a book called Europes Master Chefs. Funny enough, I thought that hop shoots must grow white, because the shoots in the dish were white, but that's just a nod to the European method of blanching vegetables to keep their white color. I've never had it with hops, and our wild hops seem to thin to be worth the trouble, but the European hop shoots look as thick as asparagus--I can only imagine the flavor. Someday.

Cleaning and preparing them isn't hard at all, but it is important to know that past the tip of the shoot itself, the vine does get tough and fibrous. The first 3 inches (or more on young shoots) or so of the shoot are gold though, and worth picking if you find some.

Cleaning wise, all they need is a quick swish in some water and they're good to go, some may be clean enough to just throw right in the pan. That being said, they're delicate little things, and should be cooked quickly, with a light hand on the seasonings, bury them with a heavy sauce and you won't taste them at all.

Fresh hop shoots, stored in a zip loc with a damp towel can keep for up to a week or more. Once you have some, hop shoot frittata is a great place to start!

If you've ever seen a hop vine, you'll know that they make large leaves too. The leaves, from my experience have more of the bitter hop flavor you'd associate with beer, but can definitely still be wilted and eaten as a green when young, or used in something similar to the fun recipe below.

It's pretty simple, but you'll need to make some green pasta. Take some hop leaf puree and mix it into a simple pasta dough, then cut into fettuccine, toss with sauteed hop shoots, ramps and morels and garnished with some cheese.

They also make fun dolmas, although you won't be able to fit tons of filling in them as the leaves are so deeply lobed. 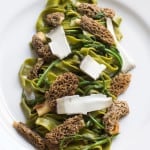 You could change this up in plenty of ways, adding some mixed spring vegetables like blanched peas, fava beans, or asparagus would be great. The horizantal plating style of this is a fun way to cook pasta and show off the ingredients inside it, as opposed to having everything en masse in a bowl. It's a restaurant trick, but one that's easy to do, you just use a tongs or forceps and twist the pasta, then arrange on the plate and garnish with the remaining ingredients. 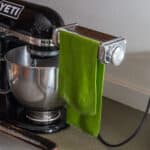