"Hey do you know what these mushrooms are?" Is one of my favorite messages. My friends, family and acquaintances around North America regularly send me images of mushrooms they're curious about, and it's like having multiple pairs of eyes.

The best messages though, come from local people at locations I can travel to quickly in the event they've found something interesting, as was the case with a large batch of completely subterranean Tricholoma populinus this November.

Earlier this summer though, my friend Zach, (the lumberjack behind Foxwalk Sawmill), sent me a picture that stopped me in my tracks. Parasol mushrooms, and lots of them, in his wooded backyard 15 minutes away.

I drove over faster than spores on the wind, handed him 100$ (a bounty keeps the info coming) and ran into the grove of oaks and hardwoods behind the cabin he built by hand. In an open, dappled area, there were the most parasol mushrooms I'd ever seen growing, spread out in the wide arc of a fairy ring.

I haven't picked a shaggy parasol in at least four years, my spots for them in the Twin Cities having both been developed for condos (audible crying). Even then, when my spots produced it was never more than a pound or two of mushrooms.

I knew the season was perfect for Chlorophyllum rhacodes which generally fruit later generally than Molybdites (these were found October 13), and every ounce of instinct told me they were going to be delicious, but, if there was even a hint of the tell-tale green spores of "The Sickener", I'd be packing up and going home early, mushroom-less.

If you're a mushroom hunter, you'll know that tingly feeling though. Deep down, all I could see was a basket of beautiful parasols sitting in my kitchen. I knew they were edible, but it's a good rule of thumb to practice your I.D. due diligence.

I dropped down to my knees just to take it all in: the biggest fairy ring I've ever picked from. Giant mushrooms, some of the caps as big as dinner plates, stems of larger mushrooms coming in at eight-ten inches long, and other young ones popping up with the signature shaggy parasol chicken drummy look.

They were parasols alright, but the size didn't quite fit. They were massive mushrooms, absolutely huge, bigger than any shaggy parasols I'd ever seen. With the lack of green spores, I knew they were edible, but, I didn't know exactly who they were.

With their large size, I mistakenly thought they could be Macrolepiota, and, as I'd heard about the genus containing undescribed specimens, I got excited.

Confusingly though, the mushrooms had all the hallmarks I associate with Chlorophyllum rhacodes: deep orange to rust staining when cut, drumstick shape on younger specimens, growing in partial sun, shaggy, fluffy caps, and, most interesting of all: a giant, fluffy annulus (ring) on the stem, which really threw me for a loop. Either way, I ate a bunch, and they were delicious.

Shaggy parasol ID points that stick out to me

The art of mushroom hunting for culinary purposes doesn't have to be an exact science, and I think more people should know that you can find a wild edible, and know it is safe to consume beyond a shadow of a doubt without having keyed out the specimen to species. It really is one of the most inviting parts of the hobby.

Even so, there's always part of you that wants to know their true identity, Latin names being a sort of invocation and stamp of approval nearly as delicious as the first bite of buttery cap.

After I processed them (some dried, some cooked and frozen) and stuffed my face with a couple pounds, I sent some images, and a casual plea, to mycologist and cantharellaceae sage Professor Greg Thorn. Unfortunately Lepiotoids aren't his specialty.

Fortunately, Greg connected me with Else Vellinga, an expert on Lepiotoid mushrooms (great podcast with her here on Welcome to Mushroom Hour, she's named 22 species to date!).

Else immediately confirmed my giant parasols were Chlorophyllum rhacodes, so I assume the variation in size apparently a moot point and not something that would differentiate them on a species level.

Variation in size of mushrooms is relatively common, but I had never seen it so pronounced, some of the giant rhacodes were nearly a foot tall, where others I've harvested, by my estimation, would be about 6-7 inches at max. Either way, they're delicious, and I have a new spot I can check from now on. 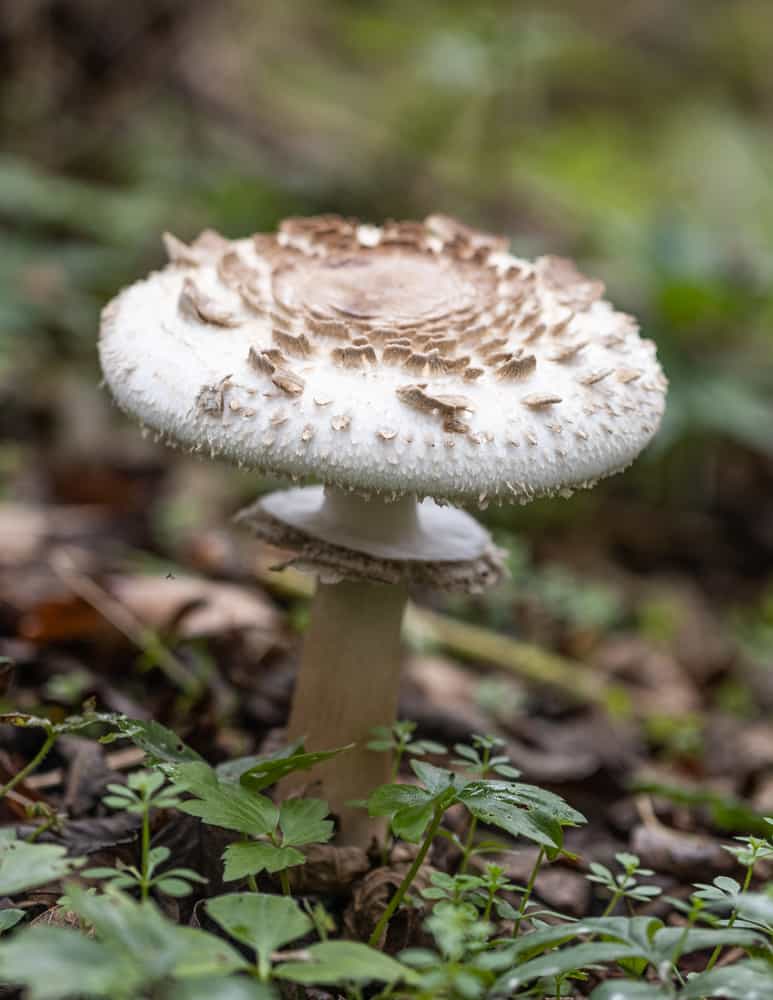