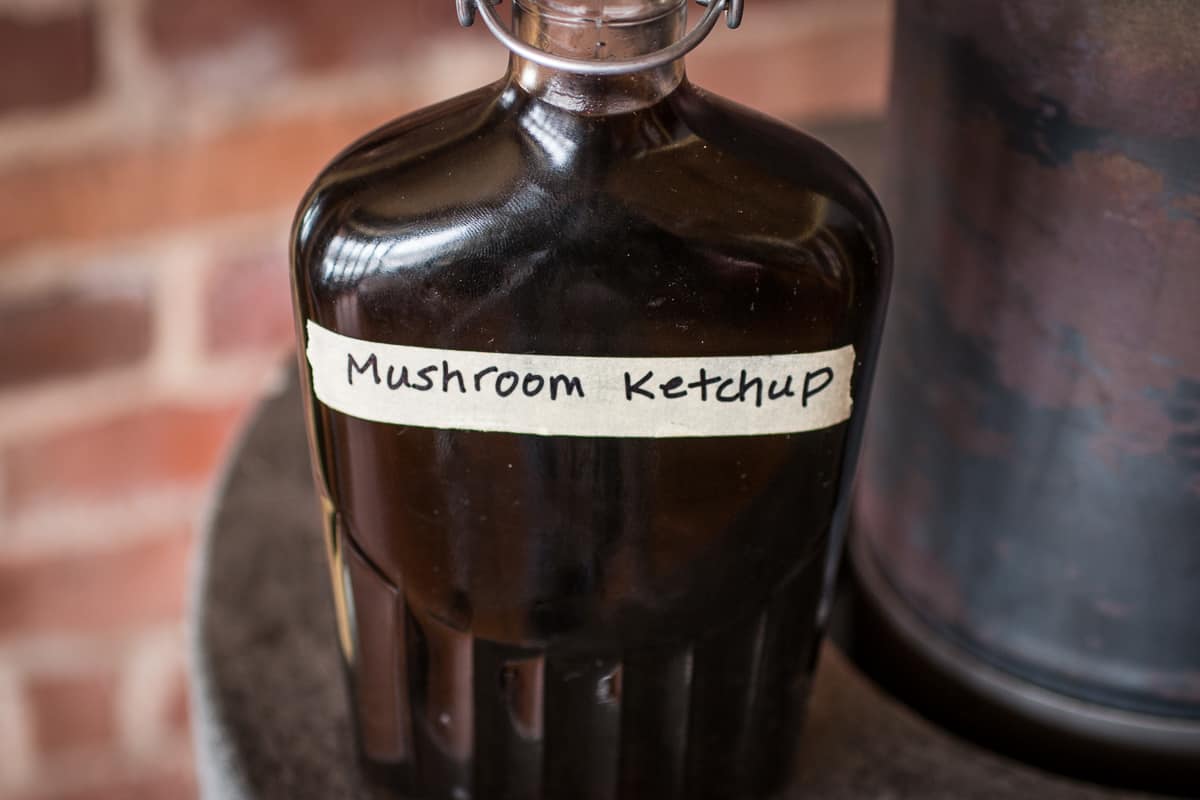 Mushroom ketchup is the condiment you want to make when you find too many mushrooms to fit in the fridge. Bottle courtesy of Ellen Zachos.

Have you ever run up to a massive chicken or hen of the woods, only to find it just a tiny bit past being good for the pan? Ever thought there might be something useful you could make with all the edible mushroom biomass you walk past, but pass up? Enter mushroom ketchup.

Mushroom ketchup is one of the original ketchups (also called catsups), all of which probably got their name from an Asian fish sauce called ketsiap. A couple hundred years ago, ketchup was basically a sort of catch all name for different liquid condiment, and you might have ketchups made from grapes, walnuts, or all kinds of different things.

Mushroom ketchup, is one, if not the best known (and still enjoyed) sauces in the family. I'd heard of it, as it's fairly well-referenced in cookbooks around the turn of the 20th century in a number of books I've read, but I didn't make my first batch until about 4 years ago, a time when I was going through 80-100 lbs of mushrooms a week--a great time to start working on a recipe. 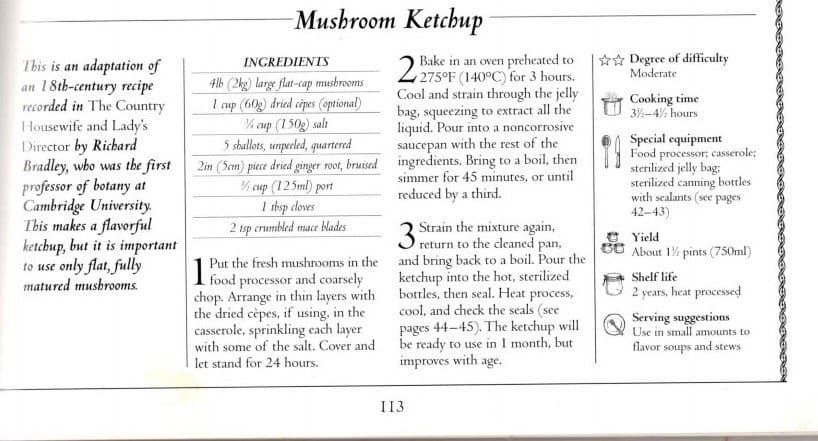 An example of an older recipe for mushroom ketchup. This will have a much higher salt content, and a shorter shelf life compared to my recipe, which includes vinegar to lowers the pH for long-term storage. Recipe from Preserving, by Oded Shwartz. Image courtesy of fellow forager Staci Walker.

I'd seen the Townsend video many people reference now, and although I love historical cooking videos, there was a problem: at that time, there wasn't a single recipe online, and the only mushroom ketchup recipes I could find didn't include specific proportions of salt.

Let me tell you, seasoning to taste with salt, is fine, but something like "a few spoonfuls of salt" can be interpreted vary differently from one person to another (a pet-peeve chef tic of mine). One of my old line cooks made a ketchup from dryad saddles and, while it tasted excellent, it was so salty it made the water I used to chase it down taste sweet.

When making condiments, measuring your salt with a scale can mean the difference between something tasting ok, and your friends saying "you should bottle and sell that".

First, I ordered a bottle of commercial catsup online to gauge the flavor before I set off on my own. Then, for my first couple batches of mushroom ketchup, I had my cooks save the stems and season them with 3% of their weight in salt and leave them in the cooler.

After a couple weeks of collecting stems, I'd add some dried boletes (slippery jacks from Chile) along with some spices, then cook, puree, strain and bottle. It was really, really good. The mushroom flavor, even made from cheap boletes and buttons, was deeply mushroomy and rich, and hit the menu soon after in the form of cream of mushroom soup, using mushroom ketchup to underline the earthy flavors.

The only problem was that I ran out too fast, so I started ordering product specifically to make the sauce, which is when I developed the version I'm sharing with you today: a version by the mushroom hunter, for the mushroom hunter. 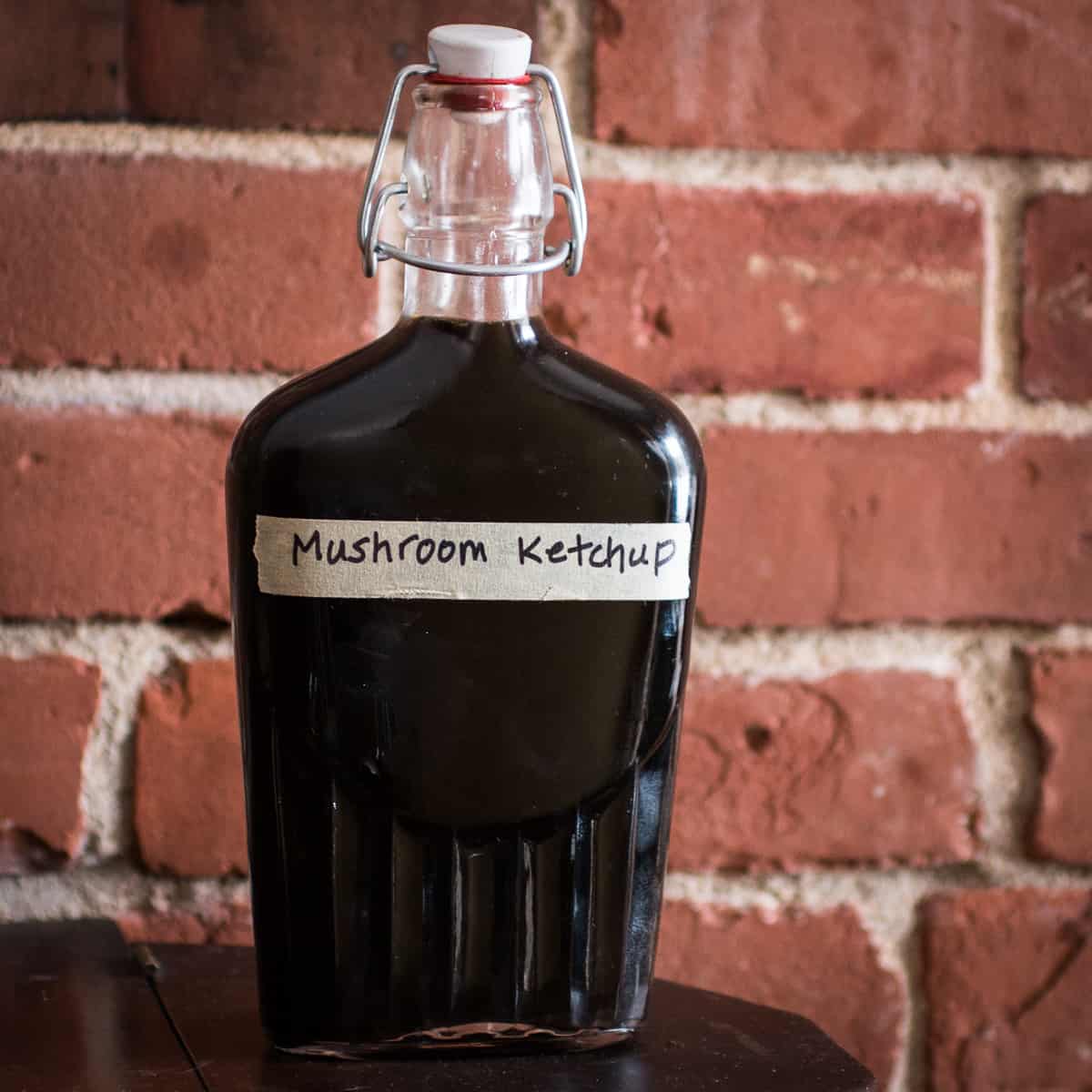 Here's some takeaways I've learned over the years: 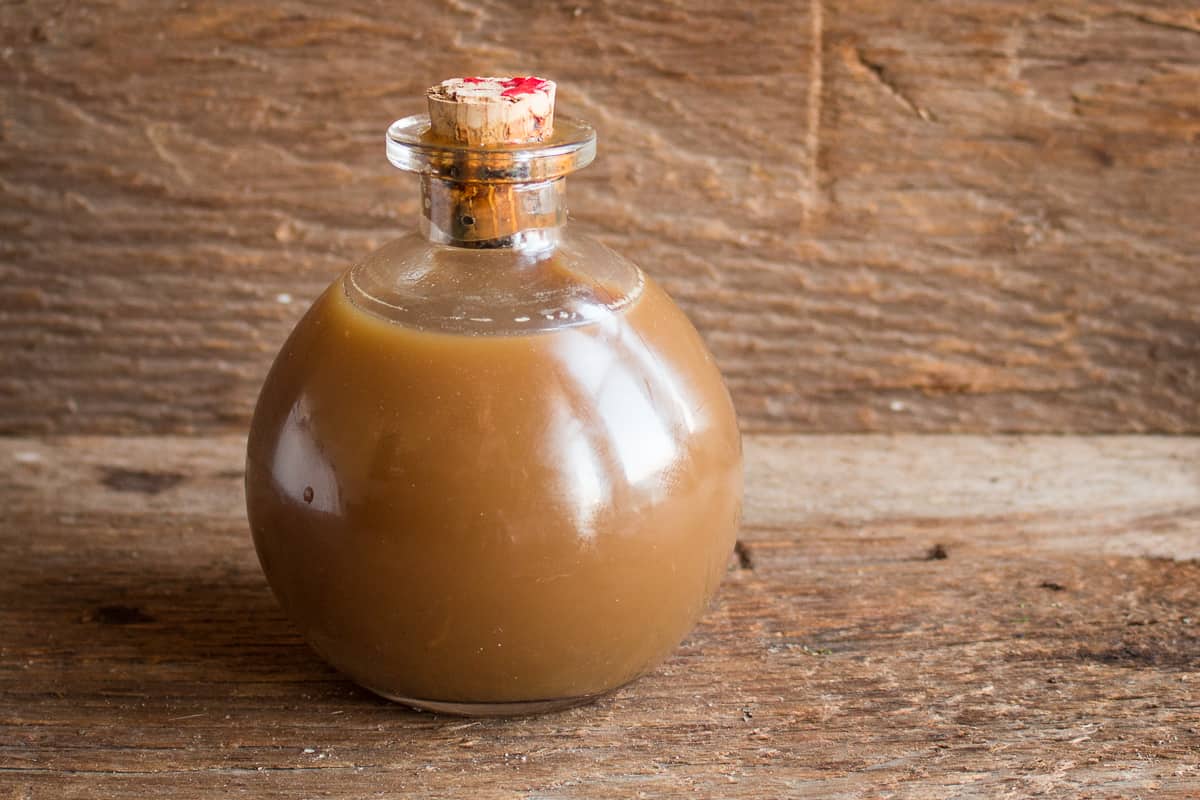 Chanterelle ketchup. Note that the sauce is cloudy. Unfortunately, I processed some of the mushrooms to fine, and the particles clouded up the ketchup. It still tastes great though. Omit the fish sauce for light colored mushrooms.

I've done a lot of different things with the stuff over the years, but here's some favorites that won't fail you. 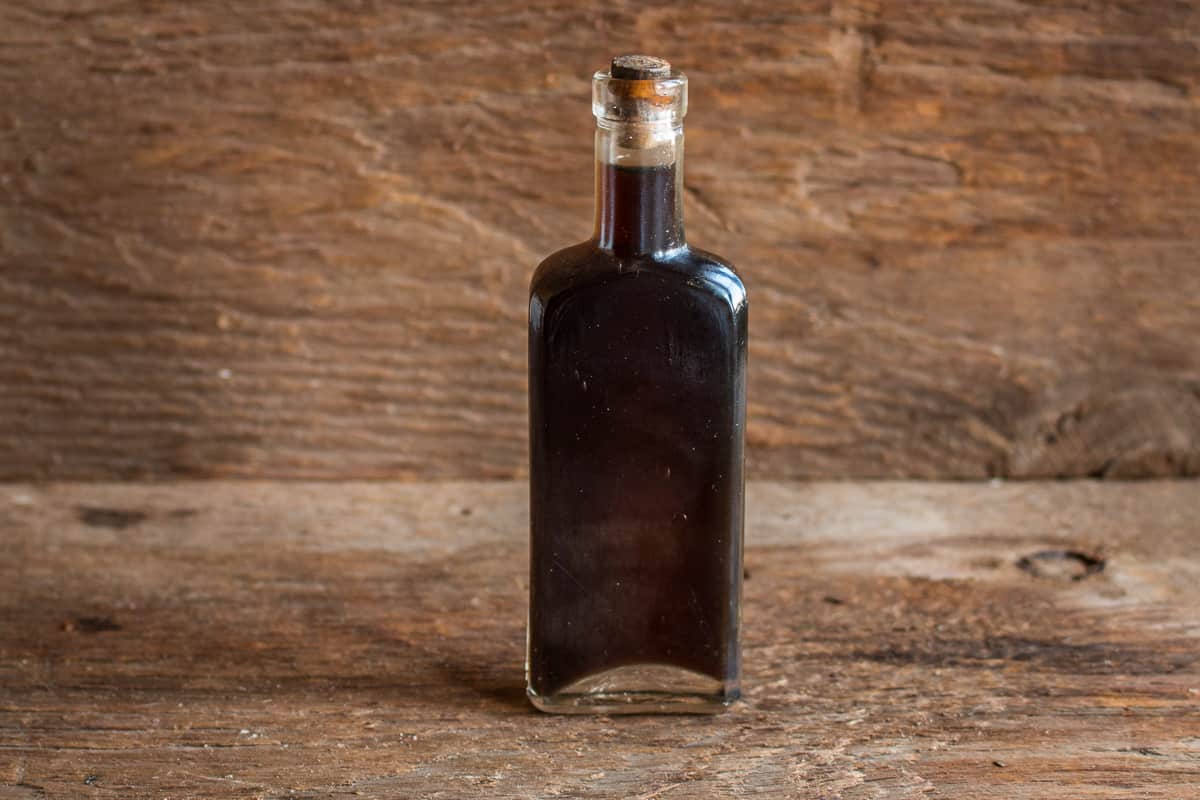 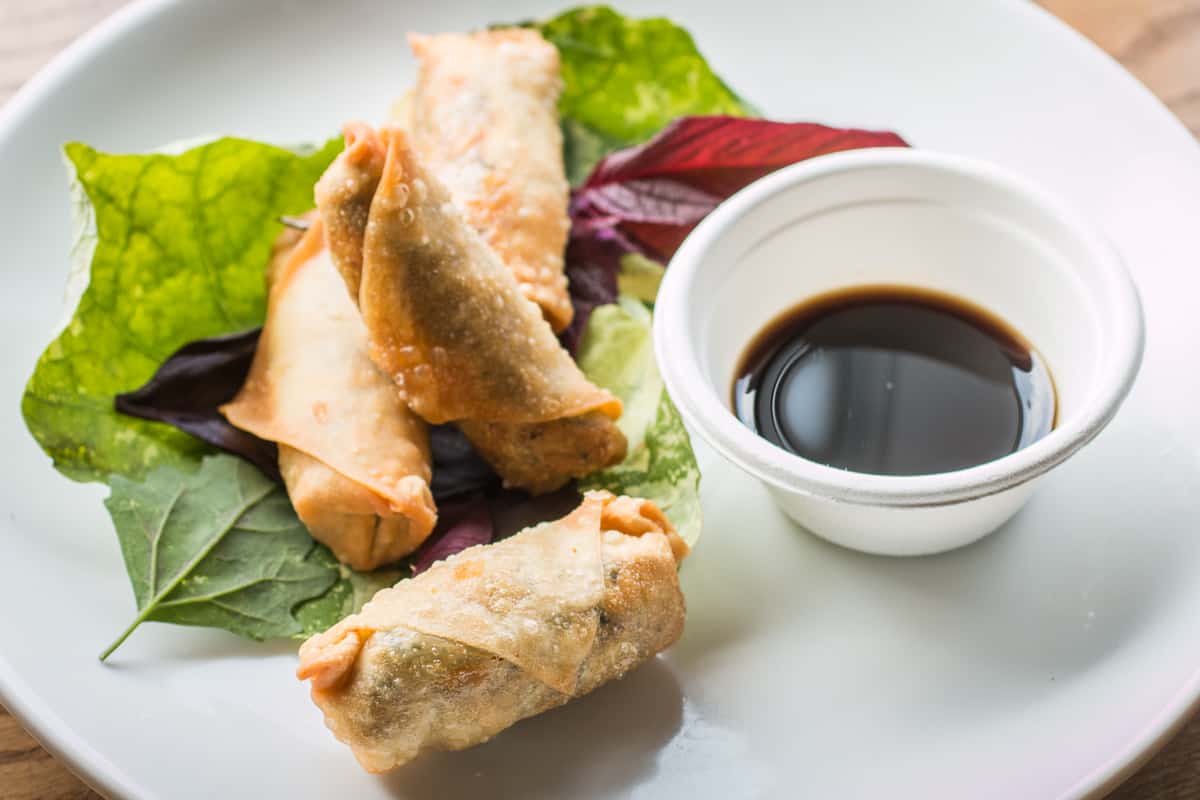 Shiitake egg rolls with mushroom ketchup made a great appetizer. The dark color comes from a dash of Worcestershire, but it's optional. 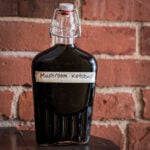 You'll notice there's Worcestershire in here. While not traditional, it doesn't change the flavor, and is mostly there for color. I use it only for mushroom species that will give a dark juice. Omit if you make this with chicken of the woods, chanterelle, hedgehog, dryad saddle, or other mushrooms that give a light colored juice.
« Smoked Venison Shank Ramen
Venison Heart Bolognese »