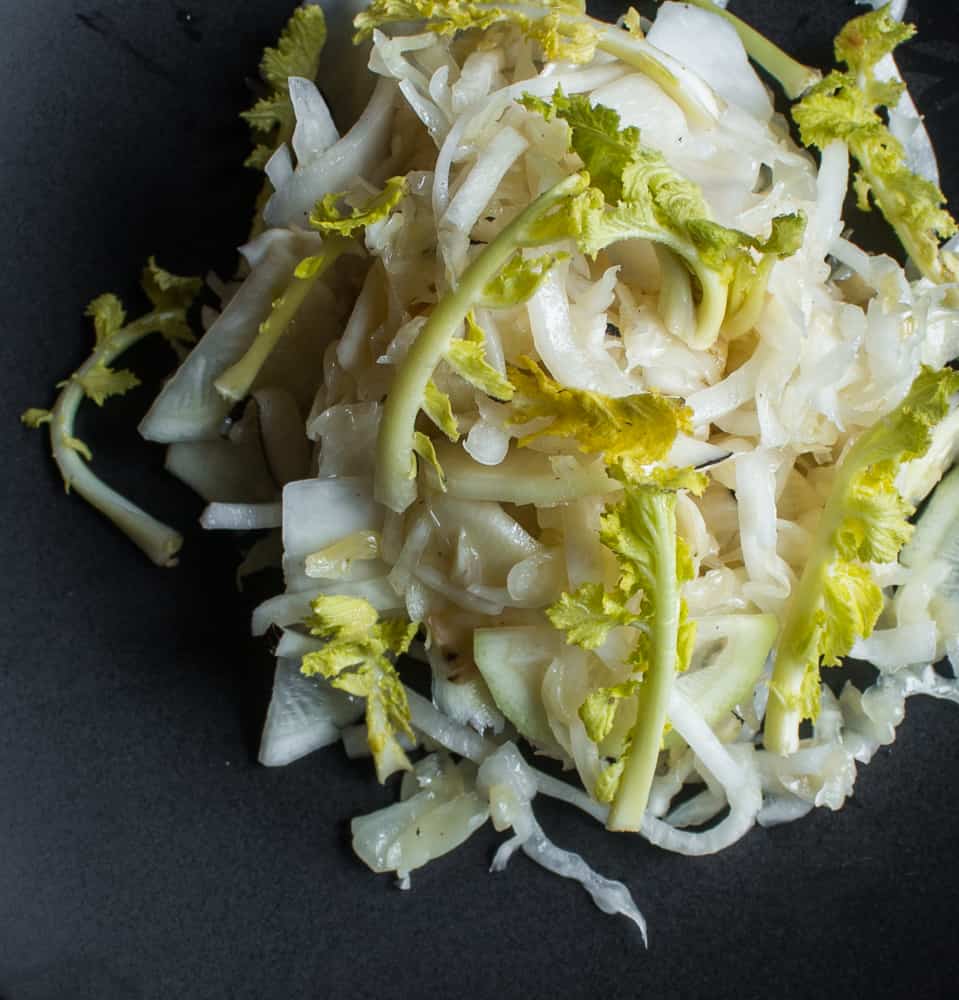 As a society it seems to me we’ve more or less completely forgotten what it means for food to have a season. Every year I inevitably get questions about how much asparagus can be offered in November, or if someone can get Minnesota peas in March. But, growing up I was just as ignorant.

I was a kid detached from what grew in the soil, with no idea what food was actually available locally during the Winter, or any season really. It took me until I was in my teens to hear the first whisper of seasonality. Later in my twenties, I had to be taught to run a seasonal kitchen and painfully forced to adhere as much as possible to the what was available, or at the very least, the idea of it, which I owe to my mentors.

Now, in my 2nd kitchen that pays close attention to the seasons, every year the challenge comes around again: how to celebrate winter, instead of thinking of it as a hindrance.

On some of our more horribly cold days this year I was thinking about the landscape, the desolation, the white, the cold, and most of all, the lack of light. Once upon a time, green things were only available during certain times of the year when they naturally grew. Now we can get things shipped out overnight from Timbucktoo any time of the year. 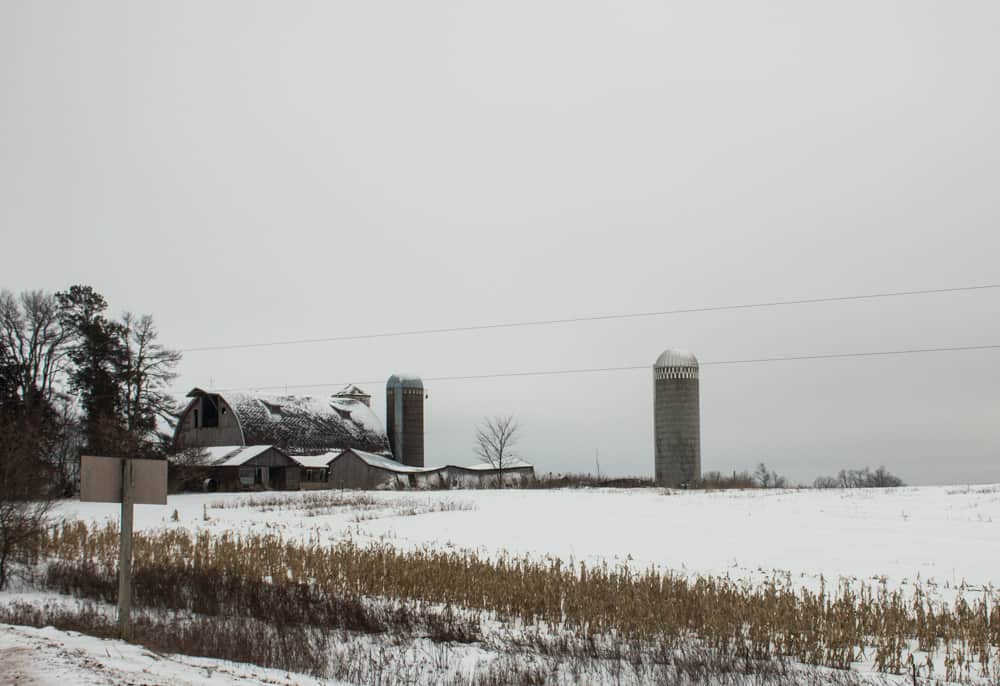 On the way to the farm off highway Q near Menomonie, Wisconsin.

Things still grow here in the Cold Midwest winters though, something I was reminded of when I got a box of black winter radishes from a farmer this year. I Looked in the box and saw the radishes had sprouted but the sprouts weren’t green, they were white and pale from growing in the dark and not having sunlight for photosynthesis. I talked to the farmer to see if they could ever clip the young sprouts for me, which they’ve started to do here and there. 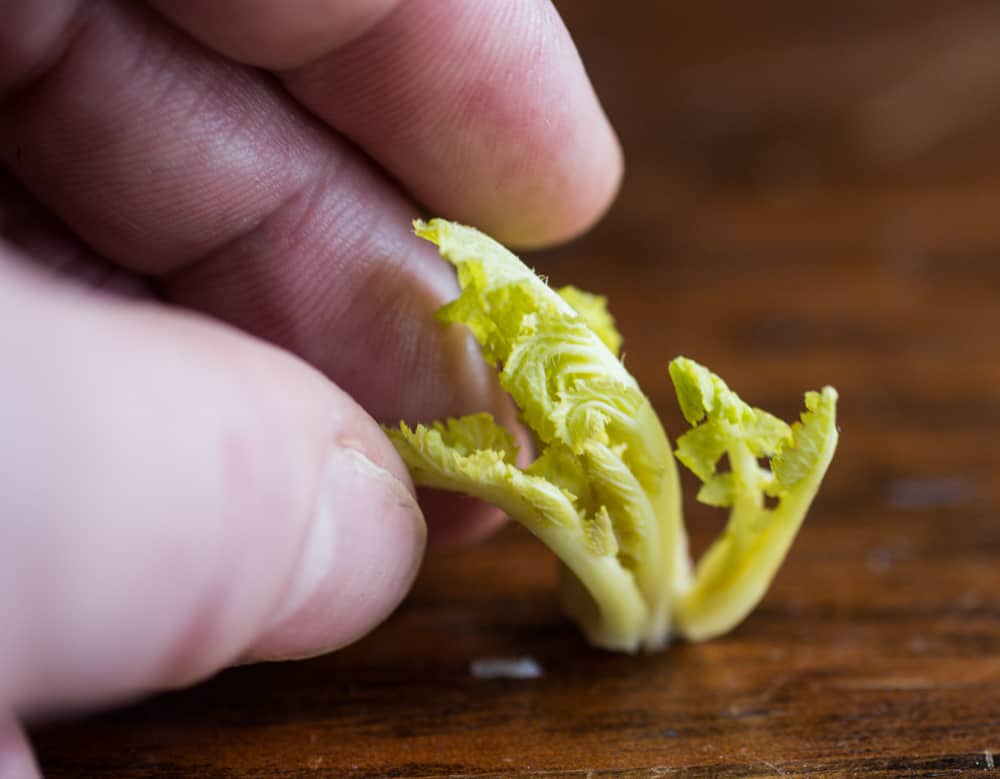 For the restaurant menu, I wanted to make something with as many root vegetables as possible to resemble the landscape and evoke the monochrome white, an ode to snow using storage cabbage and a large variety of white roots to make it taste complex, thinking that it would surprise people since the plate would appear to be a simple cabbage slaw. 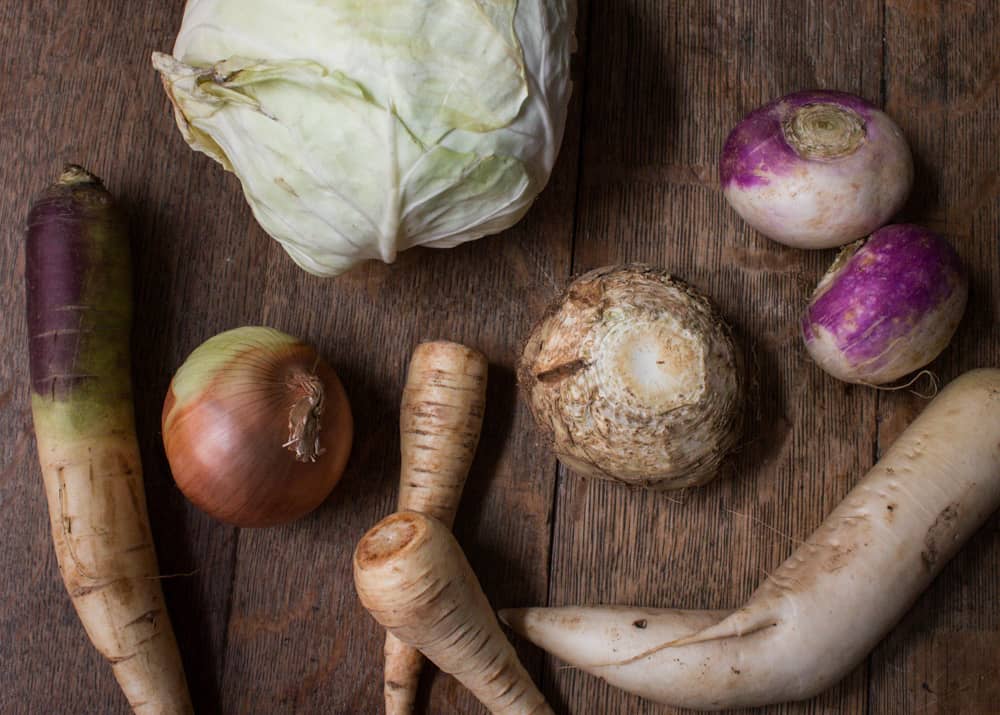 I espoused to the service staff how I was trying to celebrate Winter instead of feeling caught in the juggle of roots, onions, onions and roots. I thought it was poignant, an important statement on the seasons.

Theory is one thing though, and at the end of the day a restaurant is a business that satisfies a need people have if people aren’t enjoying or in this case understanding something on the menu, it has to go. Over the course of a week, I started to lose count of how many times servers came back to me and said:

Server: “Chef, the customer is wondering why all the vegetables on the plate are the same, you said there was going to be a big mix?”

Me: They think they’re all the same?! Seriously? IT *IS* A BIG MIX! DON’T THEY UNDERSTAND I’M TRYING TO MAKE A STATEMENT ABOUT SOMETHING IMPORTANT!?

Part of the problem here is that the service staff isn’t articulating the nuances of the dish to customers. The other part is that I have some mild type of obsessive complex.

After I get feedback like that (which is necessary, don’t get me wrong) the same questions always float through my head:

The answer for me always seems to come back to moderation and balance. As much as I want to share all I’ve studied about the esoteric and funky, the fact is that people don’t often want to eat or understand a loaded plate of food. Sometimes a plate of food needs to be just that.

So for now our white vegetable slaw will sleep tight in the restaurant files, on to the next experiment, for now. 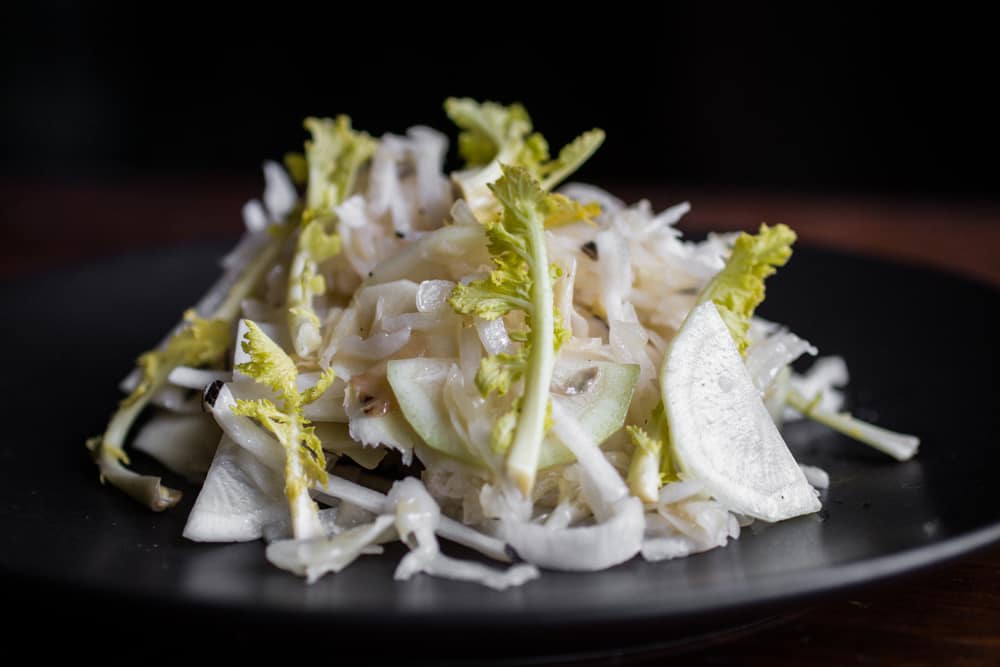 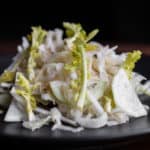 Yield: About 1 gallon of slaw, depending on the size of some of your vegetables, which will feed a crowd of people
Prep Time30 mins
Course: Appetizer, Side Dish
Cuisine: American
Keyword: Slaw, Winter vegetables
Servings: 10

This will make an excellent sauerkraut too, but you will want to increase the salt to about 2 tablespoons (I just season it to taste until it's decently salty) and omit the vinegar and oil. Then put the mixture into a crock, weight it down so that the vegetables are completely covered with their water and store in a cool, dark place for about two weeks, or until it's as sour as you like. Alternately, vacuum seal the slaw in a large bag and ferment, burping (opening the bag) and resealing when needed.
Previous Post: « Dried Morel Bisque
Next Post: Forager Chef Trailer 2017 »