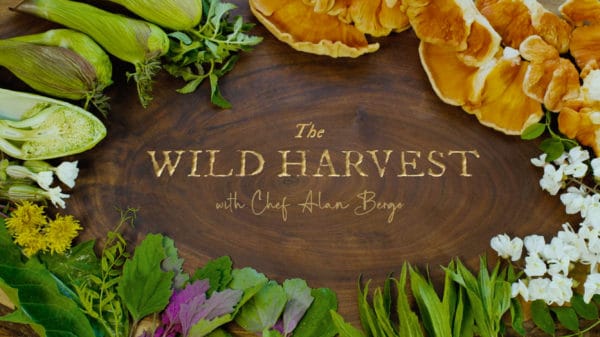 Episode Three of The Wild Harvest show is here: another dose of nature from the woods, rivers and fields of Wisconsin straight to you. 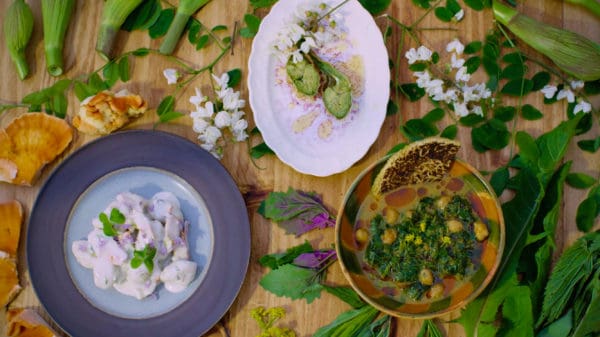 Differing from Episodes One and Two, Episode Three has an underlying theme: Italian poverty food, or la cucina povera. If you've been following along with the blog for the past few weeks, you might've noticed a similar theme. With the other episodes, I released all the recipes at once when the show was ready, but two of the recipes that we feature needed a little more of a spotlight on them than just a quick mention, specifically la Minestrella Gallicano and Zavirne. By themselves, both are unique, fascinating recipes, but together, they help paint a larger picture of the deep variety, width and depth of Italian culinary traditions relying on wild plants.

La Minestrella, a Tuscan soup of dozens of wild greens is the first recipe we feature. Image by Jesse Roesler.

The final dish we settled on was the most difficult: something with chicken of the woods mushrooms. Like I've said before, plants are pretty simple--they'll always be there if you're at the right time. Mushrooms don't care if you'd like to film them though, and they work on their own timeline. Time is precious, and if I'm going to try and coordinate a shoot for some of the direct-to-camera footage with Jesse, and the Credo Nonfiction Team, I want to make sure we're going to get what we need. Nobody likes getting skunked. 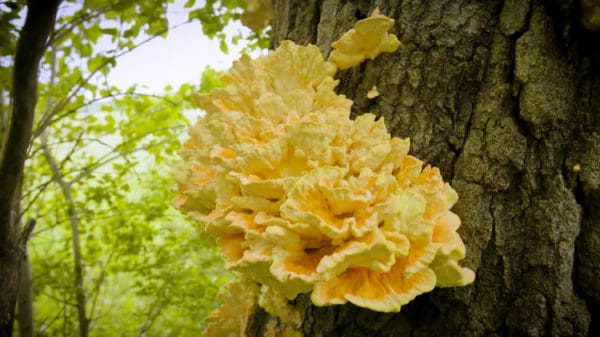 Thanks to a tip from a friend, we were able to capture a stunning chicken of the woods tree. Image by Jesse Roesler.

I knew that June would probably be the best month to feature chicken of the woods, since there'll be so many others vying for the spotlight afterwords, but June is also arguably the worst month for wild mushrooms in the Midwest, sans winter, so I was a little itchy to say the least. If you get a good rain at the tail end of morel season though, you'll get some really nice young flushes, and, luckily enough, we got the rain, and my friend Nettles over at Nourishing Roots was nice enough to give us a heads up about an epic chicken tree she'd found.

It was one of the best fruiting's I've seen, one of those awe-inspiring times where nature shocks you with it's bounty, and, after the excitement dies down (if that's even a thing), you're left confronted with the question: "what am I going to do with all this food?!". It's one of those finds that turns into a hunting story you tell around a campfire. But you don't have to take my word for it--see for yourself. I snapped a quick behind-the-scenes video below, but it can't hold a candle to what Jesse's high-powered lenses captured in the finished product. 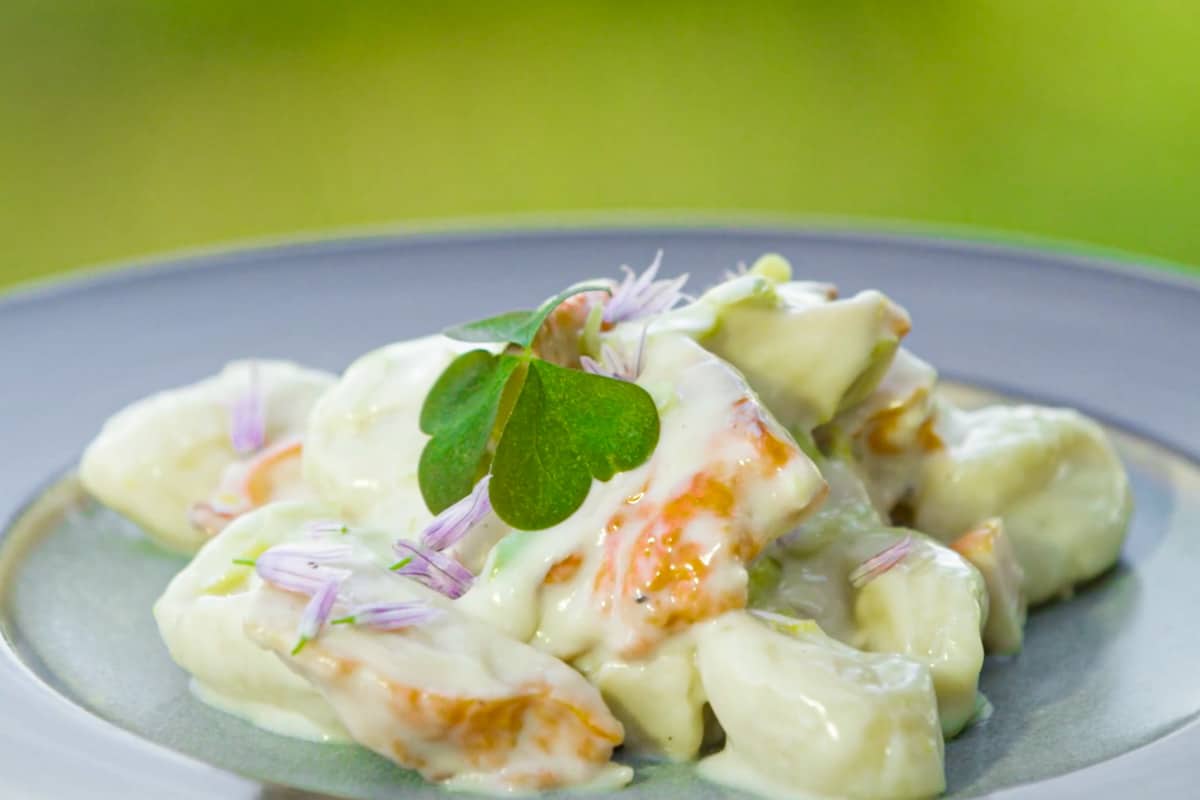 Chicken of the woods gnocchi with lemon cream is one for the recipe box. Use gnocchi or your favorite pasta. Image by Jesse Roesler.

The only problem was the paradox of choice: there were lots of possibilities for Italian themed chicken of the woods recipes (just google fungo di carrubo). Trying to keep with the poverty food theme we settled on a nostalgic recipe for me: my old Chef Angelo Volpicelli's gnocchi recipe made without egg (egg yolks are for the wealthy in the North) along with some cream and lemon. If you haven't had chicken of the woods with lemon cream sauce, do yourself a favor and give it a shot next time you see some with gnocchi, or just your favorite pasta.

The final garnish to the episode was the intro: a moody beginning evoking the research behind the scenes. I'm often reading and stumbling down wild food rabbit holes in search of the latest artifact I can brush the dust off and eat. While it isn't edible, my most prized possession in the whole wide world is a literal artifact--a 250 year old book on mushrooms in Italian called Fungorum Agri Arimensis Historium. The 2nd edition tome is in the original Latin, and, although it's not going to tell you how to cook a mushroom, seeing the history dripping from the pages sets the tone of the tale, and gave Jesse and I an excuse to invoke another epic journey that's inspired a lot of us.

Enjoy the show, preferably on a big screen to bask in all of it's 4k glory. 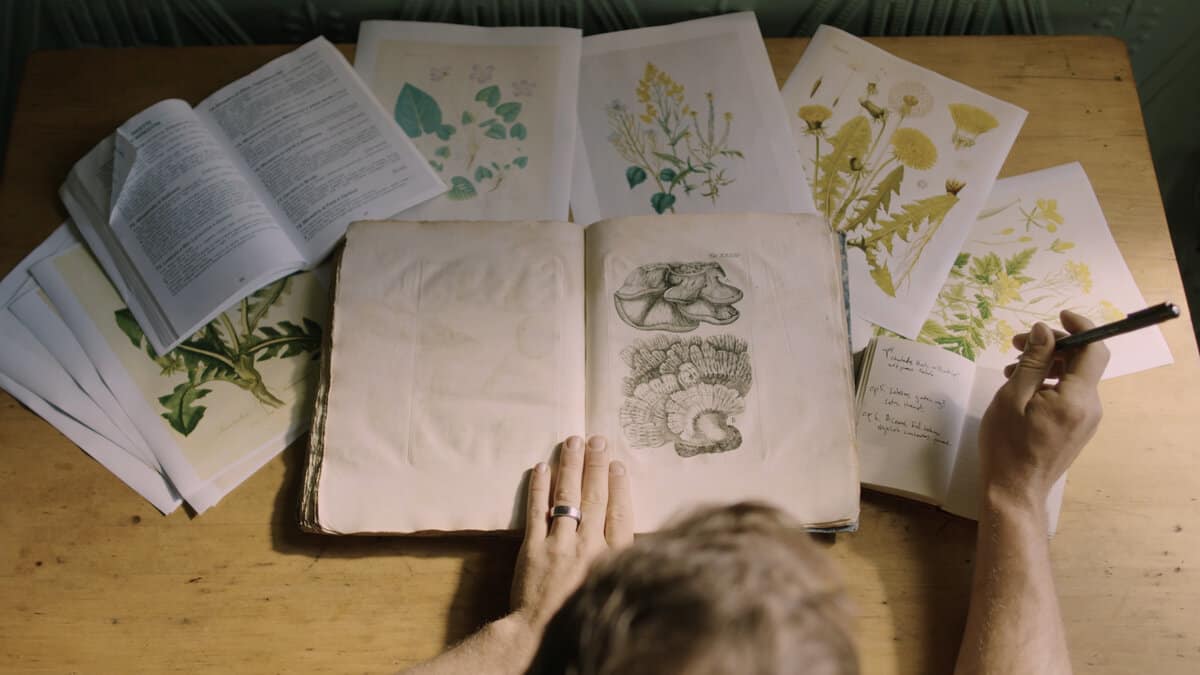 Channeling my inner Bilbo Baggins before embarking on the latest quest for edible treasures. Image by Jesse Roesler.

Special thanks to Duluth Pack for contributing to this episode. If you're in the market for gear, you can use the promo code FORAGER15 for 15% off anything they sell. In the episode I'm using the Rambler pack, which, with a small plastic (3.5 gallon) garbage can stuck in it, or a wicker basket, makes a solid hard-sided pack for gathering. 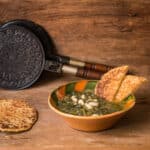 La Minestrella, The Italian Stew of Many Greens

Traditionally dried gallorini beans are used here, but they're impossible to get (trust me, I tried). White cannelinni beans are about the closest thing, but dried chickpeas are great too, and always nice with greens. 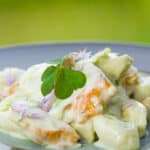 Gnocchi with Chicken of the Woods Mushrooms and Lemon Cream

Potato gnocchi with chicken of the woods in a lemon cream sauce.

Note
Par-cooking gnocchi is my preferred way of making them, just cook in rapidly boiling water, drain and toss with a bit of oil up to an hour or two before serving. 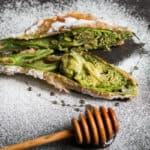 On the batter
My flour-egg-flour batter is easy and designed to give you a crisp crust that’s easy to work with, that anyone can make with minimal equipment. That being said, deep frying is the best, and there’s more than one way to fry things for dessert. If you prefer things like pancake batter, etc, go ahead and use what you like.
« Gnocchi with Chicken of the Woods Lemon Cream
Cooking Wild Mushrooms with the Wet Saute »