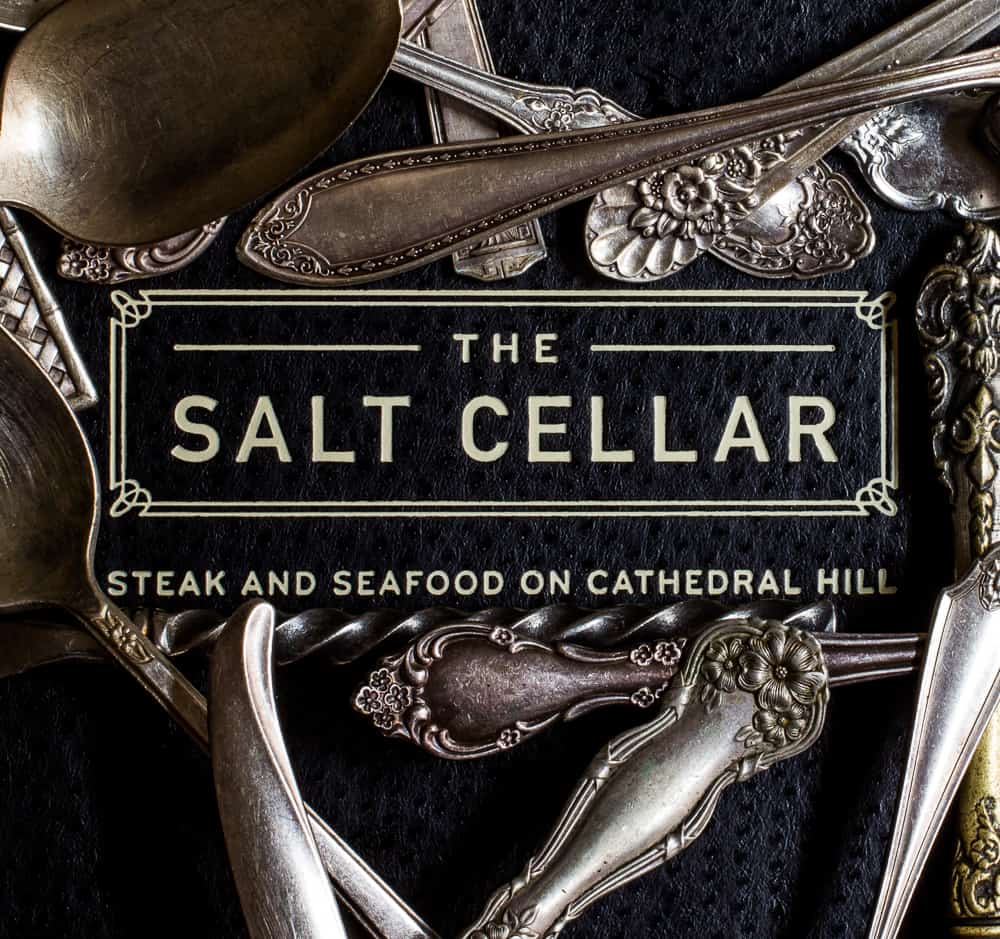 The first branding image I shot for the Salt Cellar’s website.

Even though it’s only been a few months, it feels like ages since I signed on with a new restaurant. For me it’s hard to believe, since last year at this time I was living in my friends basement, reeling mentally and physically from Lyme disease; feeling a little hopeless.

My new adventure started when my boss Chef Lenny Russo told me he was consulting with a group of guys who were going to open a new restaurant. I loved my position at Heartland, and the direction it pointed my life in: one of culinary exploration, and excitement. 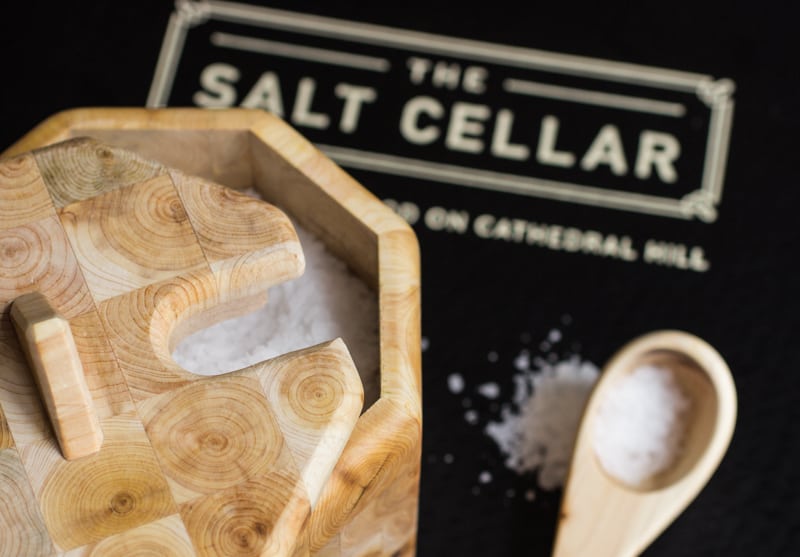 Heartland, and it’s daily changing menu allowed me to travel into my psyche and create, and teach myself about just about any food I wanted to cook with. It changed my life, my style of cooking, and my perception of food in general.

It wasn’t all fun and games though. To work in what some people call a “temple of local food”, I sacrificed. I made a line cook’s wage, and was forced to give up my one bedroom apartment and basement hop for 2 years to make ends meet to be able to cook the food I loved.

I could’ve gotten a cushy corporate chef job after my first year, but somehow I knew I couldn’t do it. I waited until the right opportunity came: The Salt Cellar-a restaurant of which I would help create the culinary concept, train the staff and work to make the kitchen all my own. 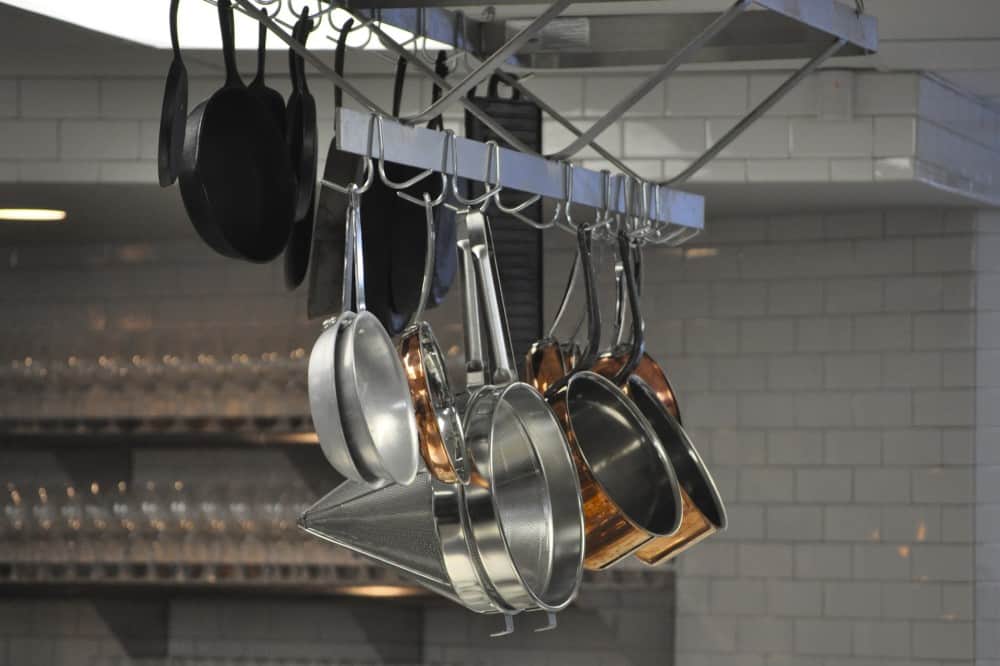 The concept was a difficult one though- A “retro” steakhouse, replete with table-side service. I spent plenty of days talking with Lenny about how we could adapt my skills to something like that. I didn’t know if it was possible, but he was convinced. 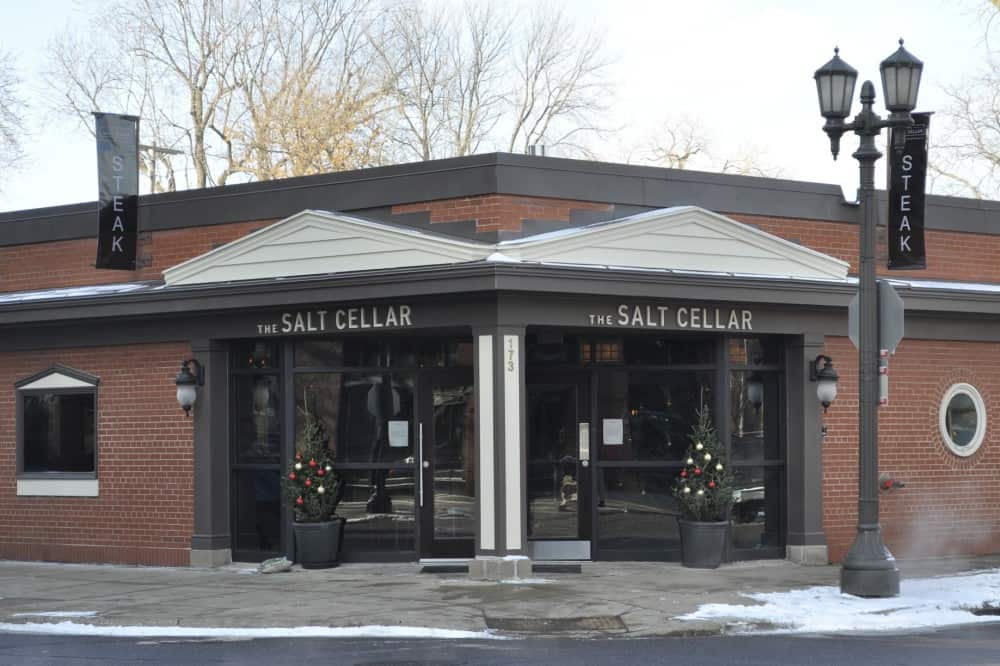 The concept, in it’s simplicity was a bit difficult to work with at first. Some of the items we were going to put on the menu seemed dull: tableside caesar, chateaubriand, and, bananas foster. Keep in mind this is coming from someone cooking at Heartland, where pig ear salad, elk tenderloin, and smoked chocolate cake are mainstays.

I more than once found myself thinking:

This is impossible. EVERYONE has Caesar salad. It’s the antithesis of what I should be making.

Compounding the issue was my love of wild food, and hunting things where I live. How on earth could I incorporate the cuisine I’m known for into something as mundane as Caesar salad?

Pecorino and grana padano for Caesars. Picture by Mark Slick

Things became more clear to me after I had a number of “research dates” with my girlfriend, who took it upon herself to bring me around to every restaurant she could think of that served played-out, old school food. We ate a la carte steaks, ceasar salads, cured salmon, Nicoise salads and lobster bisque until we’d tasted every variation we could find. After a while I started to notice a theme:

All the food tasted like crap. It was what I expected: hum drum, and made with cheap ingredients.

From there I began to see how I could embrace the concept, and use it to grow. Making a salad with pig ears would have been easy for me. But making a Caesar salad, and making it taste good enough to stand out from the sea of mediocre plates I ate through would be much harder. 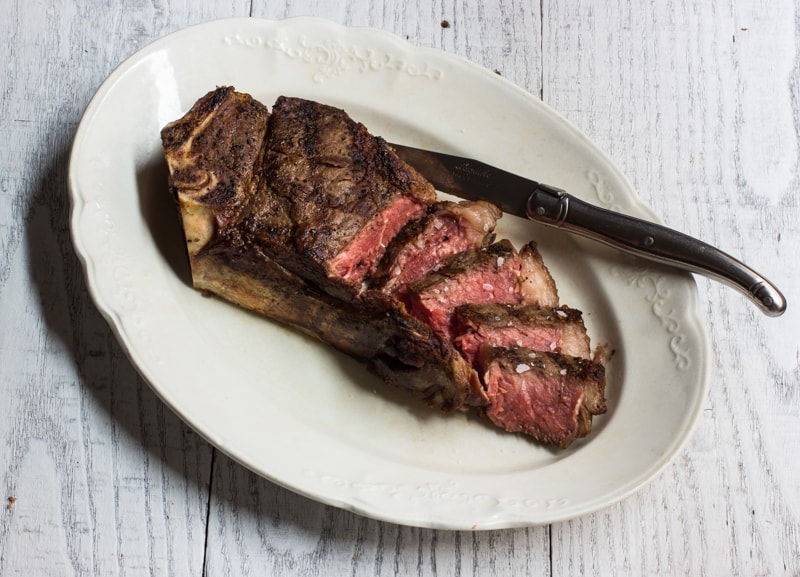 We cut steaks in house on a bandsaw, Here’s the Kansas City strip loin.

I put in a long notice at Heartland, and then took a solid 2 weeks off to do some soul searching and prepare for what was to come.

Afterwords I was in a sort of purgatory.

I was employed as a cook, but had no kitchen to cook in, since the new restaurant was still in the build-out stages. I spent my days working in the kitchen of Heartland doing early morning menu development, crafting and tweaking recipes.

For fun, here’s some dishes that didn’t make the first menu cut. They’ll be nightly specials down the road. 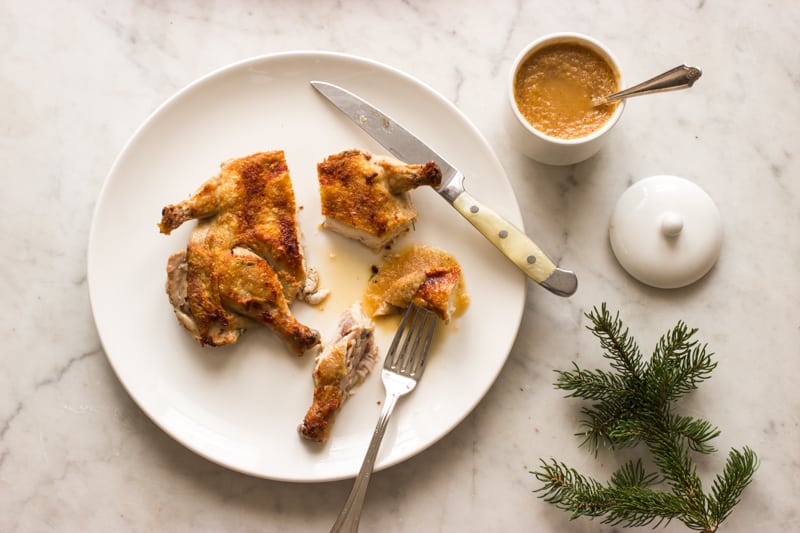 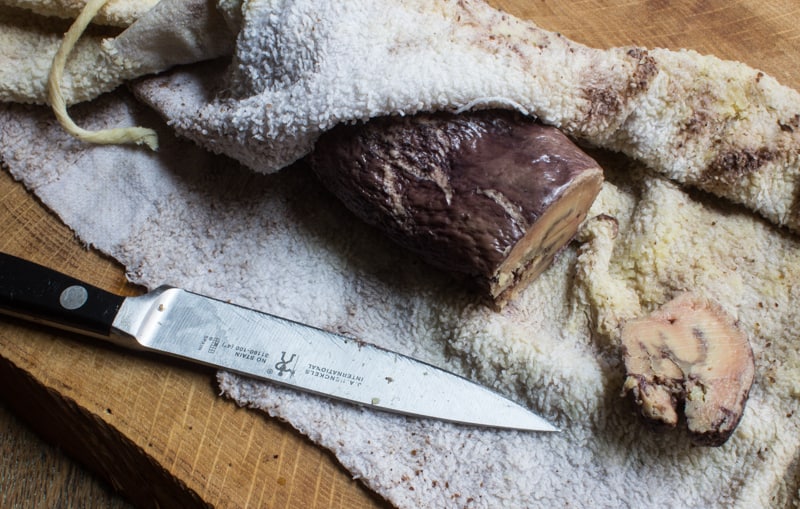 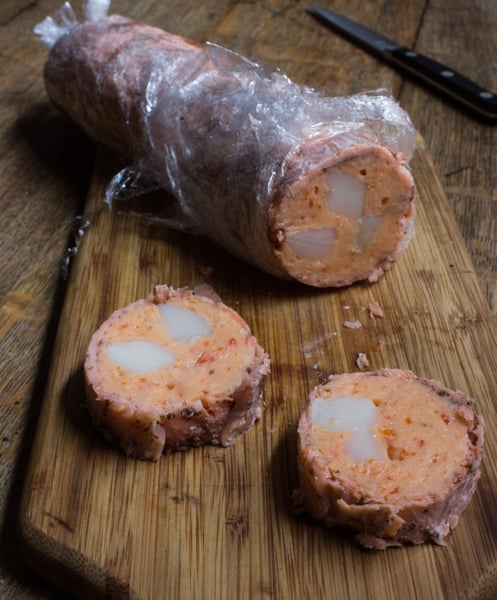 I had as a checklist, a menu outline I hashed out after a couple talks with Lenny. It began with it’s feet in tradition. There was fettuccine alfredo, buttered carrots, and filet mignon (my least favorite cut of beef).

After a couple trials with old recipes though, and a no-nonsense chat with friend and food critic Dara Mascowitz, I knew that in order for me to stand behind the cuisine I had to put my touch on it: I had to make “My Food”. 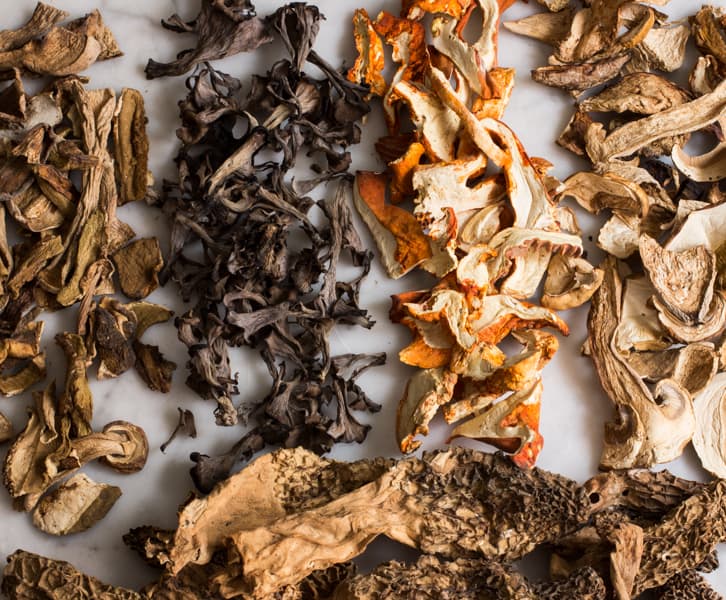 There will be mushrooms, oh yes.

The seasons and character of the Midwest needed to be there, as did the wild food. But how on Earth could/should I integrate them?

I worked alone in the kitchen of Heartland in the mornings before the line cooks showed up, trying to recreate things I remembered cooking in crappy steak houses near Willmar Minnesota. After a while I began to see places were I could substitute indigenous Midwest Ingredients. I didn’t want to scare diners, or my new employers, so I only made subtle changes, to start.

Here’s 3 brief examples of how I’ve made the food my own:

Lox, or cured fish is already on plenty of menus. There is room for creativity in the cure though, which is typically a combination of herbs, salt and sugar.

Sumac is usually thought of as a Middle Eastern ingredient, but it grows wild, across the U.S., including plenty of the grassy clearings where I hunt wild herbs. I blend the salt and sugar with the sumac in a highspeed blender before using it to cure the fish. 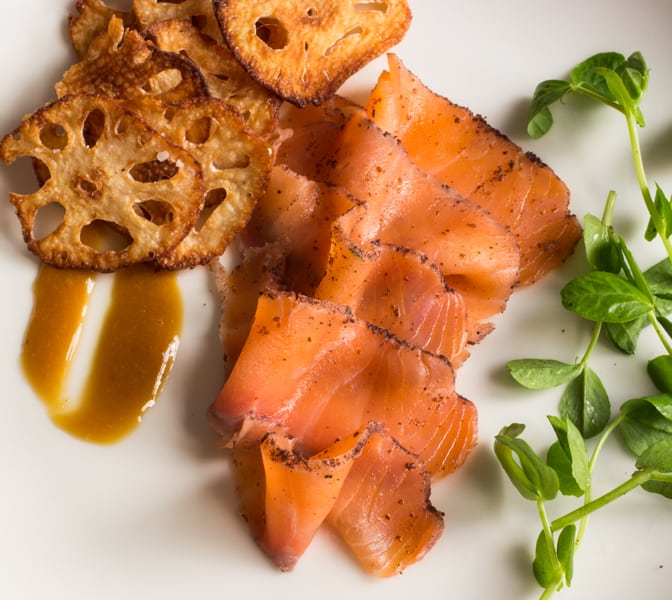 Sumac is interesting in that it acts as a spice, but also has natural preservative qualities, just like rosemary and juniper do. It’s citus-y kiss adds a pleasant, unexpected touch.

Lox should be served with a cracker or some vehicle, which gave me another idea of how to use another unused ingredient: lotus. Most people think of them as an “Asian” ingredient, but they actually grow in the Midwest too, a little something I learned from a guy named Samuel Thayer. They make a wonderful chip, and have been very fun to work with. 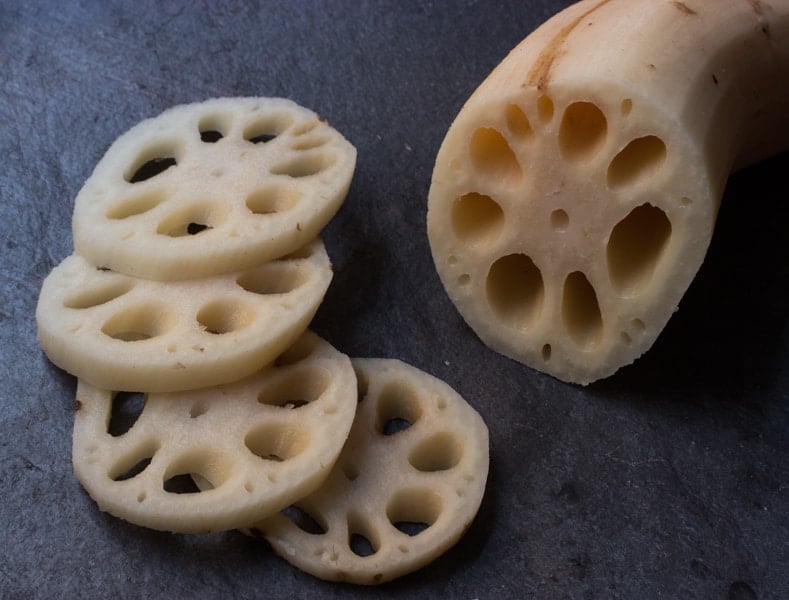 Cream of mushroom soup is another classic. With my knowledge of wild mushrooms, I knew I could make this interesting.

I make this using a great dried bolete species from Chile. What was funny was that when I received the first shipment of boletes, I noticed their Latin name was listed as “Boletus luteus”. 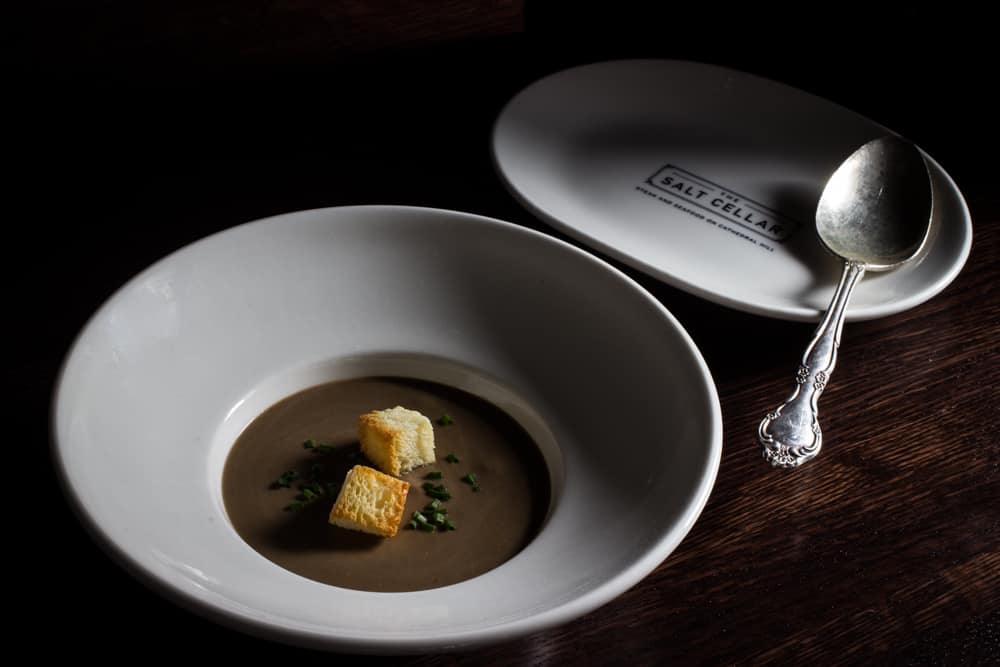 My cream of bolete is dark, and rich. A 4 ounce portion is plenty.

There is no mushroom named Boletus luteus in nature, but there is a Suillus luteus, a slippery jack, which lives under the greater family of Boletus. These Chilean mushrooms are a world apart from dried slippery jacks I pick though.

Even though they share the same name as a mushroom I pick here, they couldn’t be more different. They’re super rich, but without the skunkiness slippery jacks I pick in the Midwest might have.

As time goes on, the species of dried mushroom will change regularly as I see fit, it’s an easy way to nurture the menu and keep it fresh.

Probably my favorite part of the menu. Even though it isn’t on “the menu” 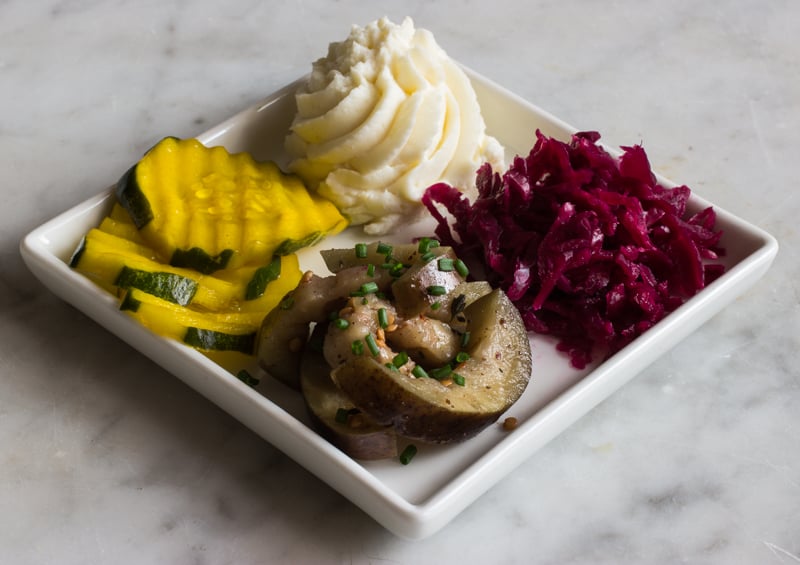 Plenty of steakhouses and supper clubs serve relish trays before a meal. A couple celery sticks, some cottage cheese, a canned olive, it’s pure monotony. Our relish tray is different. It’s a nod to my training at Heartland, and an ode to the beauty of creative, natural cooking.

The relish tray at the Salt Cellar changes daily, and functions as our amuse-bouche. It’s comprised of different things that I allow the line cooks to have a bit of creativity over, with these guidelines: 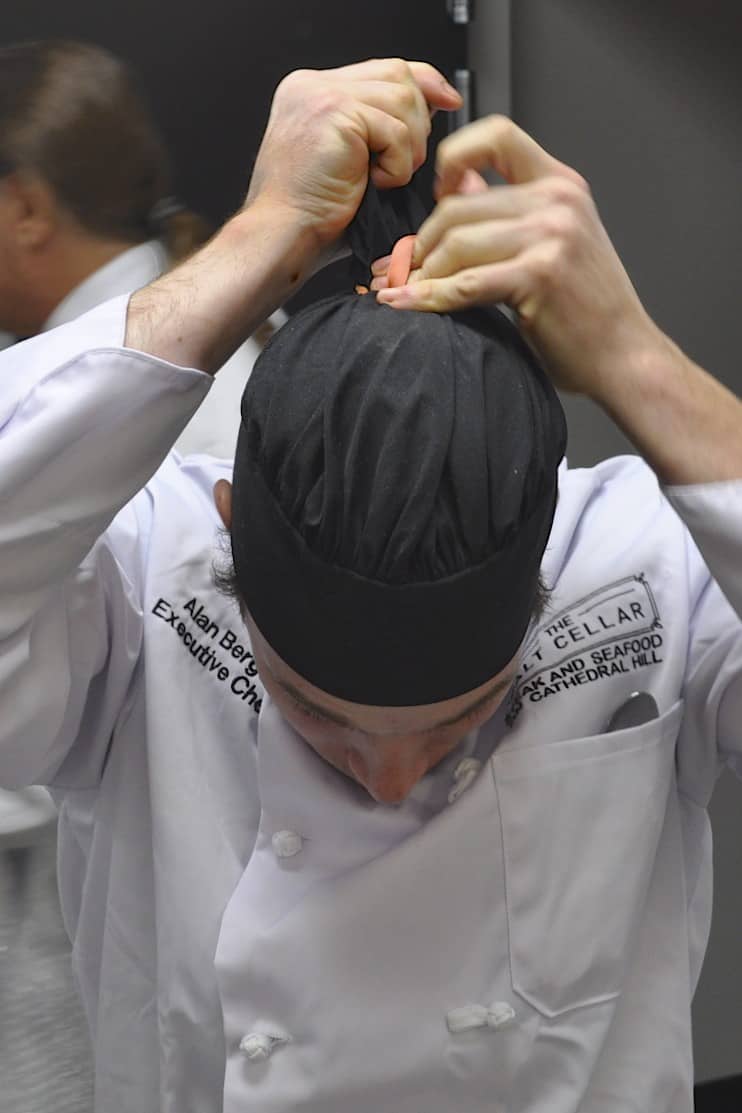 Still rocking the same hat I always wore behind the stove, because I’m still there. Picture by Mark Slick.

Special thanks to photographer Mark Slick for the photos taken the day of our soft opening.

P.S. Check out the Salt Cellar website, the pictures may look familiar 🙂