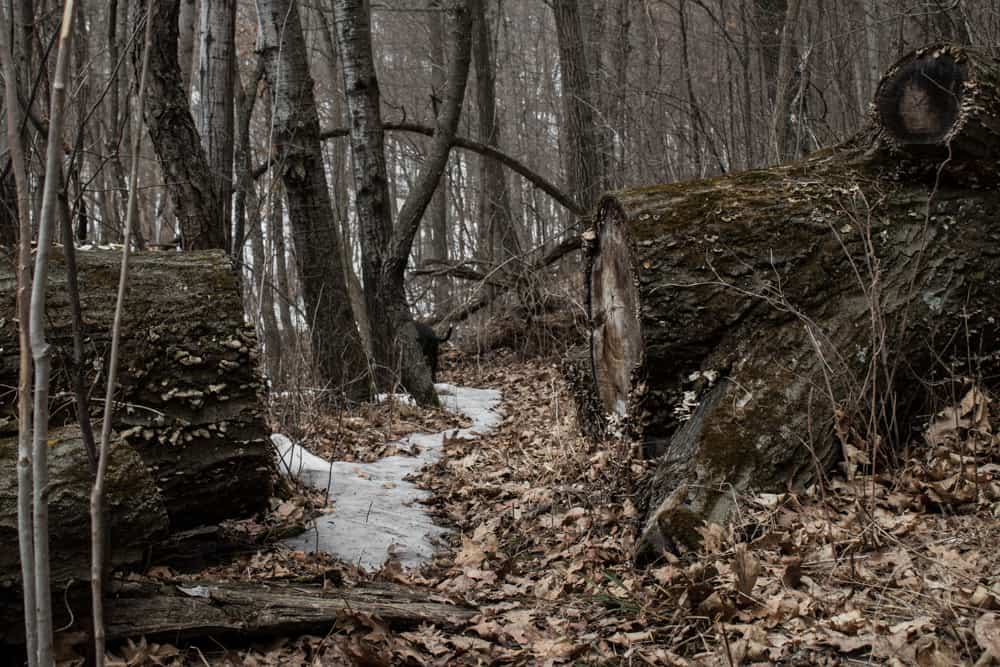 In the Midwest we’re right on the edge of the most exciting time of year. But, it’s not quite Spring yet (I’m watching snow fall today and it’s March 31). Even when it technically turns to Spring, with melted snow and budding trees, as far as ingredients go, there aren’t many available locally yet. What are available is the holdovers from the last season farmers have stored, the turnips, beets, carrots, celery root, onions and other storage vegetables, combined with the first whispers of growth, but you won’t find that in a store. 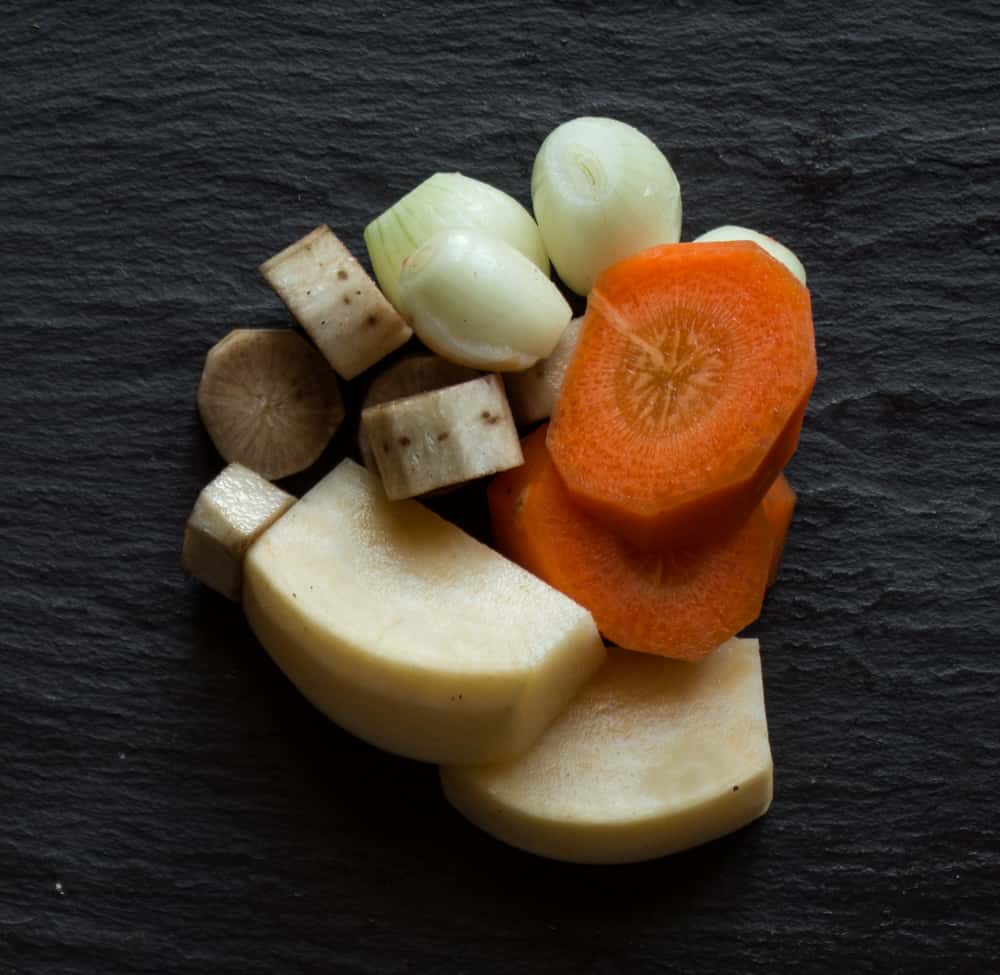 After March 20th, the technical 1st day of Spring, most restaurants will hail the apparently instant change to the growing season by throwing handfuls of IQF peas on everything to prove it, but in actuality, our Spring in the Midwest comes on more slowly, and for the record, in the Midwest, peas definitely, positively, are not a Spring vegetable.

In the Birchwood cookbook, they describe our in-between time as the “thaw season” or something like that, and I always thought it was great that they tried to give the in-between time a name. For me personally, a more apt name might be: “Hellish Midwestern purgatory of Winter that will never end”, but, that might just be the cabin fever talking. 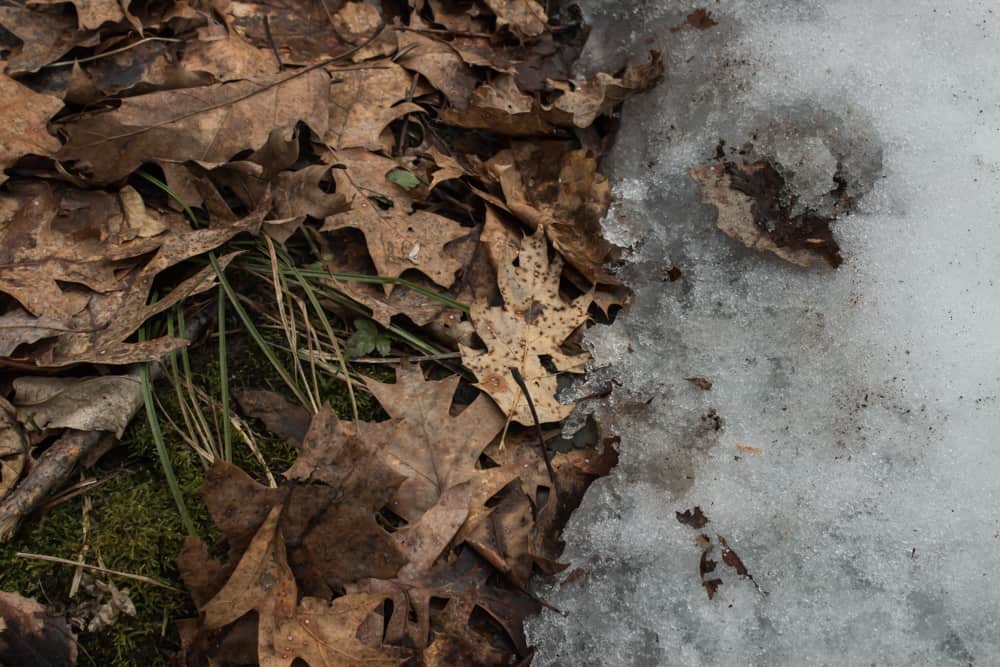 The snow thaws, but never as quick as you’d like. 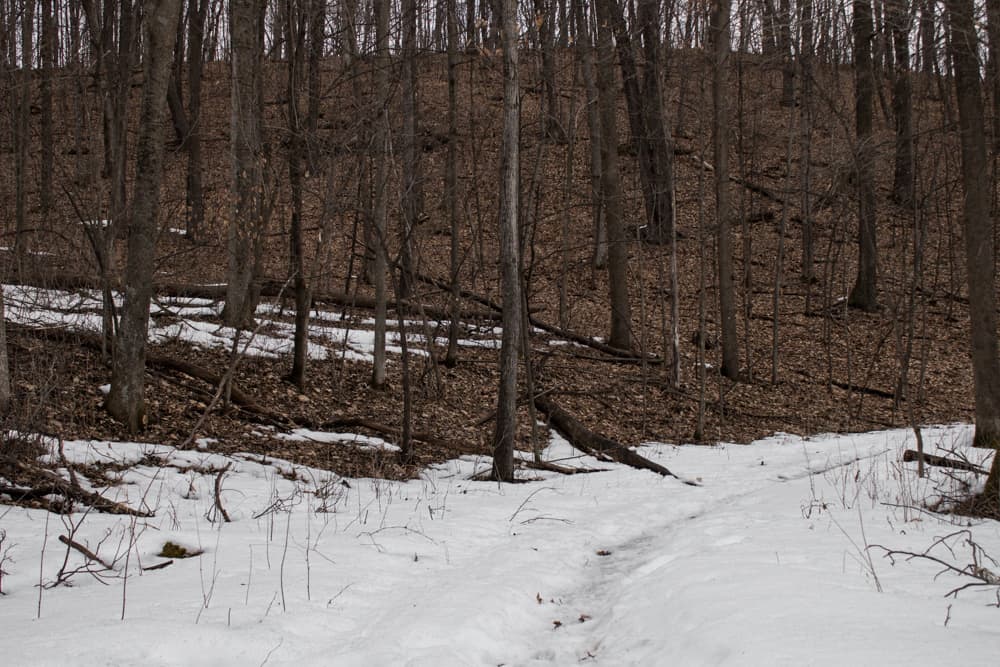 The landscape, especially the valleys in Wisconsin where I do the majority of my foraging, are still very bleak looking.

Seasons aren’t as static as the vast majority of society holds them, and when you take time to notice the intricacies of your region, you’ll probably start to think a little differently about the compartmentalization we use to describe them. A recent cookbook I read hinted we should declare that there are actually 365 “seasons”, but for the average person that can be more confusing than helpful if you don’t have a giant garden or plot of land to study. With this in mind, I thought it would be fun to share a yearly tradition I like to do, a kind of challenge.

The challenge: make a dish combining Winter and Spring ingredients from your area

Appreciating where we are in the wax and wane of yearly growth is useful to the cook in all of us, and can make for some great food, new dishes that can help challenge what the words seasonal and local mean. Every year in this weird purgatory time I try to make a dish or two that highlights that, and you can too, but there’s a couple rules:

Where to find your Winter-Spring ingredients

Don’t know exactly what’s available in the moment in your area? Find your nearest coop and talk to someone in the produce section, many coops list their seasonal produce, and if they don’t people can generally point you in the right direction.

Constraints and limitations=growth and new dishes

It seems like a lifetime ago I was working at Heartland, where we didn’t use any ingredient from greater than 300 or so miles of Minnesota. Citrus? No. Olive oil? No. Pasta? You’re going to have to make it yourself. The limitations, which were daunting at first, eventually became a sort of inspiration. Since we couldn’t use citrus, we relied heavily on vinegars, some of which we would make ourselves, instead of importing fish from the coasts, we used strictly freshwater fish, which introduced new species, textures and flavors into my lexicon. 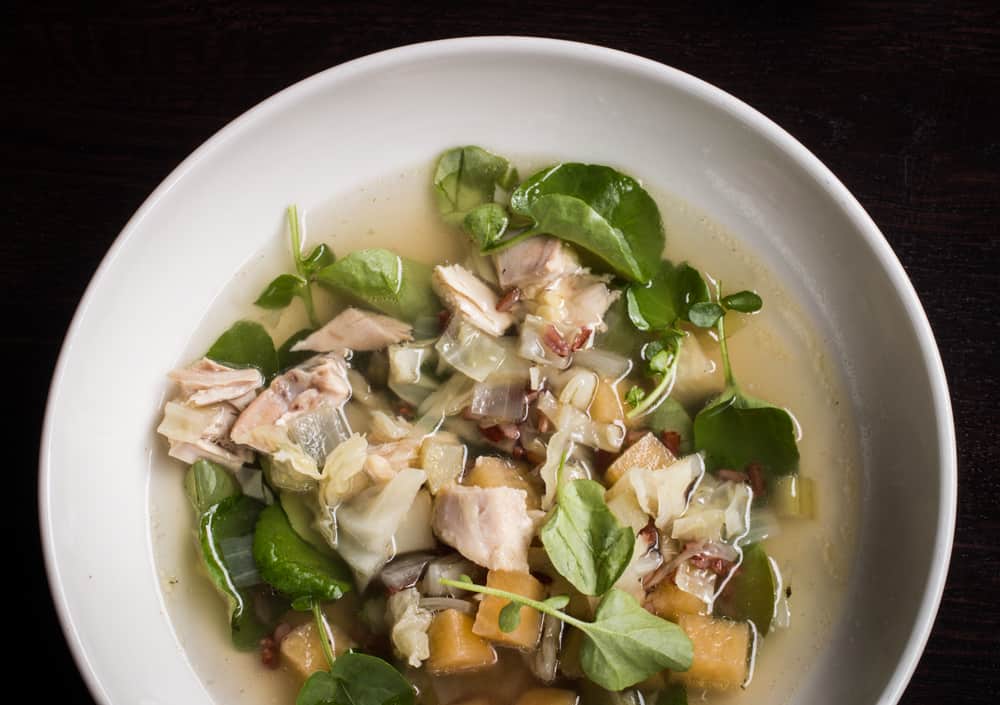 From 2 years ago: chicken broth with root vegetables and fresh watercress from the stream, another example of in-between season cooking.

The golden nugget here is that limiting yourself and not reaching for that comfortable cherry tomato in the Winter can change how you think about combining ingredients, and make you more in touch with where you live. Instead of being a prison, it can open up a whole new world of possibilities. No one’s saying you need to do it all the time, either, I don’t, but I always take some time each year to consider what could be.

Here’s an example of what I made this year, a shoulder of goat marinated with wild herbs and onions, cooked with root vegetables and the first nettle tops of the year. 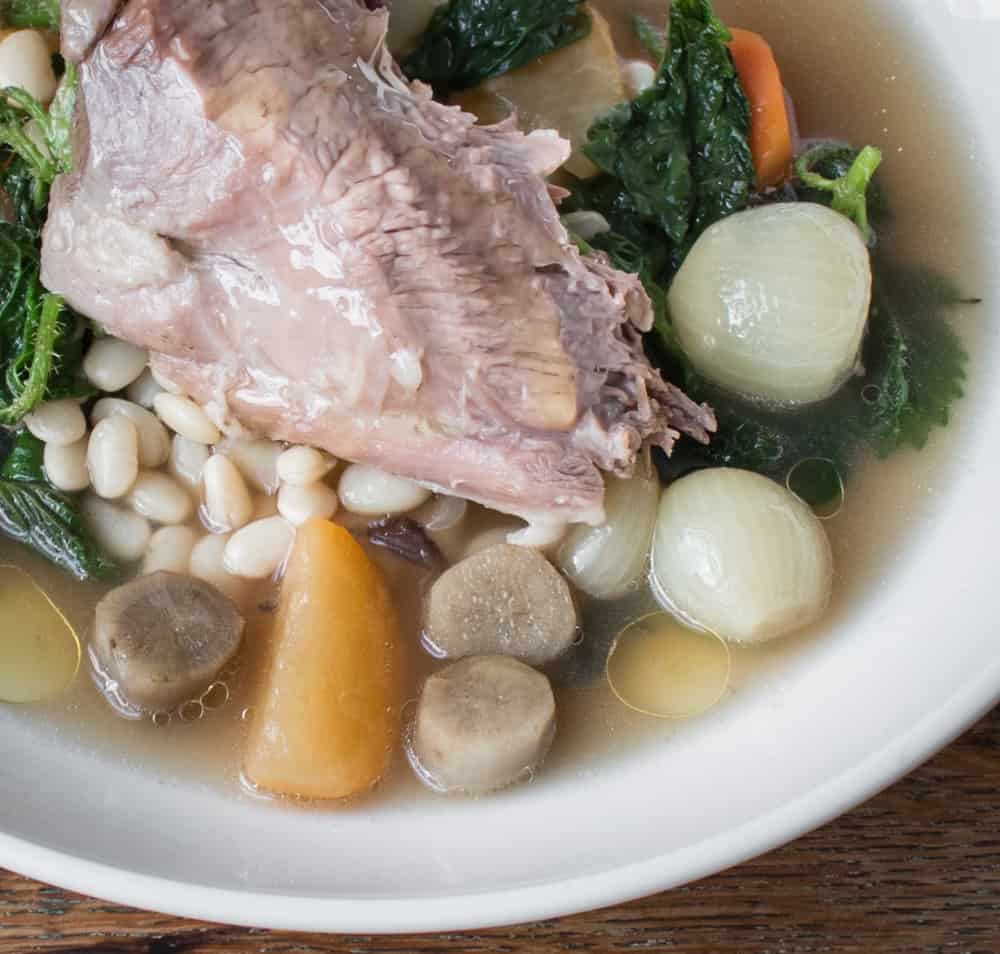 Take a shoulder of goat, and marinate it overnight with salt, white wine, powdered wild herbs and dried onions. The next day, bring it to a simmer, covered and cook until soft. Strain the broth out and use it to cook some soaked beans, burdock, carrots, turnips and small shallots, adding the vegetables in order of how fast they’ll cook. When the vegetables and beans are tender, add some pieces of the shoulder back to the pot, along with young nettle tops to finish and serve them with some of the broth. Drizzle some hickory nut oil over the top of each serving. 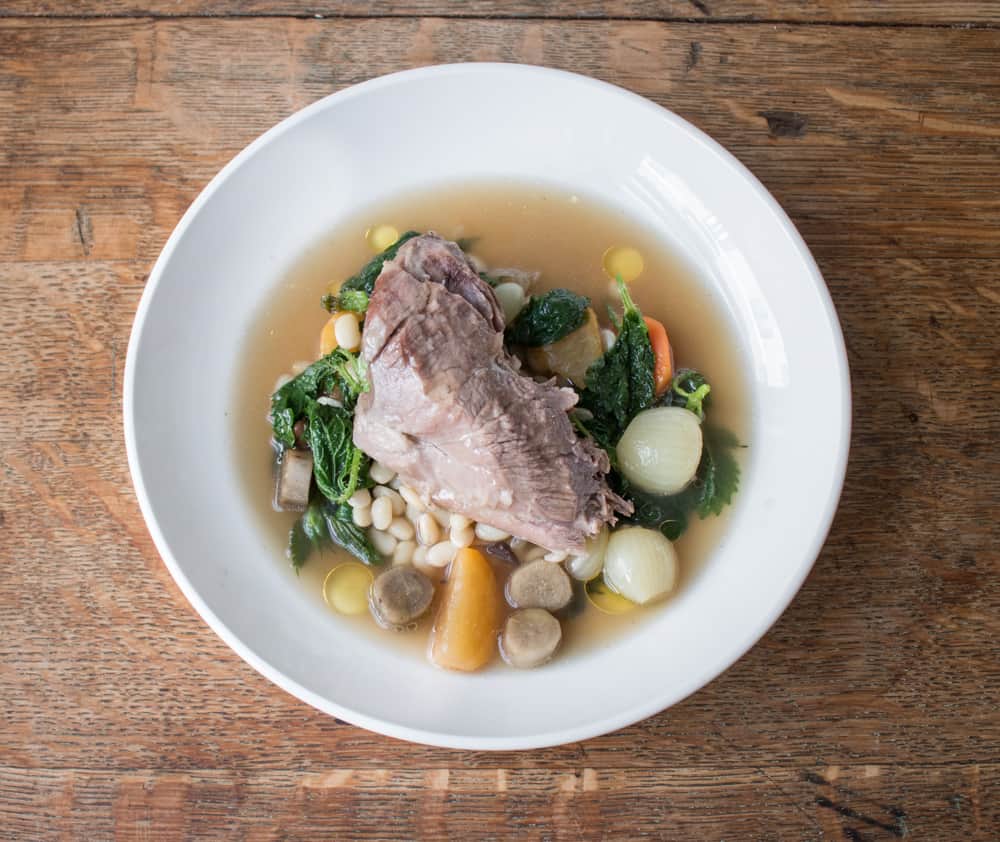 You might not live in the Midwest, but wherever you are, chances are that there are parallels here for you. I hope, if nothing else, I’ve given you a moment to consider some.