Don’t be fooled, these are not your typical entolomas. These were smaller, but still the real deal. Unfortunately my pics of larger specimens from two years ago were lost in a computer malfunction.

Wandering around the woods in Minnesota I see plenty of funky mushrooms. For the past couple years though, I have seen, very rarely, an interesting phenomena. Aborted entoloma mushrooms are usually thought to be a product of an interaction of honey mushrooms and entolomas. When they grow in close proximity, the entolomas react somehow (I’m not a professional mycologist here) and create these little popcorn ball-looking mushrooms instead of the typical gilled entoloma variety that we are used to seeing.

The phenomena I have run across is that once in a great while, still in the presence of honey mushrooms, I find aborted entolomas of incredible size. Usual aborted entolomas are probably about the size of golf balls. These ones however, dwarf the usually seen variety. The biggest ones I saw were two years ago, each was about softball size and very, very dense/heavy.

Now to the untrained eye, many mushrooms can look alike. When you begin to study a bit of the terminology that goes along with identification though, things can become very confusing, very fast. What is the pileus (cap) like? Is it umbonate (umbrella like) plane, or convex in shape? What are the lamellae (gills) like? Are they decurrent, (running partially down the stem) how far apart are they from each other? Does it even have gills? Hedgehog mushrooms have teeth instead, and any mushroom from the bolete family will have pores, or a honey comb shape underneath.

Compounding these semi tongue twisting characteristics is the fact that little differences in mushrooms that may look the same at first glance can mean they are in fact a different species. For a time I thought that my friend Mike Rasmussen (a talented twin cities comedian) and I had a patch that grew only porcini. The first time we picked from it, giddy with excitement, we quickly cut all the baby boletes growing from a hillside shaded with oak. After the initial rush wore off and we were inspecting our score, we noticed some of the mushrooms were slightly different. The pores on some of the boletes were slightly more green-ish. Eventually we figured out there was a species of tylopilus (a related bolete) growing near a lone pine tree in the patch. It was not coming from the oaks, like the porcini. To the naked eye though, they looked the same at first glance. The point is that little differences can mean mushrooms may not even be in the same family that you think they are.

Search after online search yielded nothing to me as far as information on why these massive things were appearing. The aborted entoloma doesn’t really have that much information about it online at all, and what is out there doesn’t even begin to try to approach it’s culinary uses. It is still a bit unkown as far as mushrooms go. Here in Minnesota we can pickem by the backpack full though on a good day, and I’ve heard stories of people picking and selling these to restaurants in the Twin Cities since the early nineties.

I had a notion a while back while pondering morels. Here is my hunch: its pretty well known and that a species of morel is affected in a similar way. Occasionally at the end of the spring season  here in Minnesota we will see a couple really, really big morels, they are called bigfoots. As far as the nomenclature goes, they are in the family of morchella esculenta (esculenta in Latin meaning “fit to be eaten”) but they are classified as a subspecies written as: variation-crassipes. 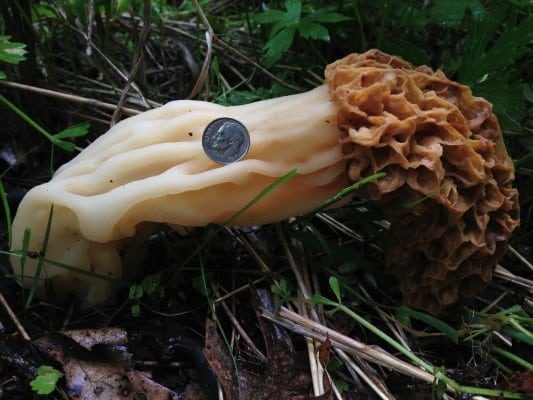 So my theory here is that the same thing is happening with the entolomas in the fall here in Minnesota. Somehow, on occasion, the stars align, making the conditions right for them to grow to behemoth size. Its interesting to note too that it seems to infect all of the mycelium in a given area. When I find the huge entolomas, I don’t find small ones nearby, although there may be other ones in the forest. If I do find a couple, they will all have the same firm, hard flesh, it’s pretty easy to discern them from typical entolomas.

So you might be wondering: do they taste different? Nope. They taste like aborted entolomas, which is to say they have a pleasant mushroomy taste and a texture not unlike cooked shrimp. They are interesting in the kitchen in that they are so dense and heavy, you could actually cut of slices and grill them, as a contact of mine in Oregon told me he was doing to a giant 1lb hedgehog mushroom“spreader”, this year, which is another story.

If anyone else has some concrete information or has seen these I’d love to hear about it! I suspect people have around here, or in other areas that can host aborted entolomas.

As a final note, I’ll tell you this isn’t the only rare shroom like this I know of and have cooked with. There is another one in particular that I’ve only seen once, and it’s like something from an alternate dimension and much, much more rare. I’ll save that one for another time though.