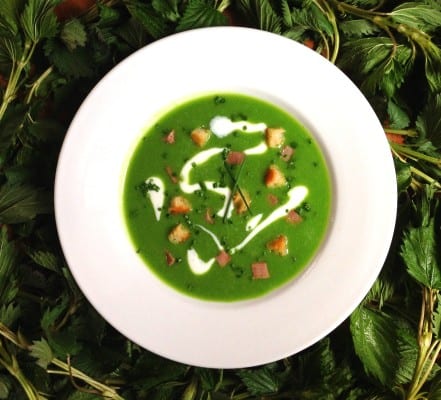 The second forage of the year didn’t yield what we wanted this morning (morels), but it was still fruitful. Stinging nettles are up, so I decided take some home and make a fun soup. Nettle soup is a classic Scottish thing. I don’t think that Scots would puree their nettle soup, but I like making pureed soups and garnishing them with various things.

The nettle soup itself is just a simple recipe, made from a base of stock and thickened with some potato to give it body. A nice trick hidden in the recipe is the use of flavorless oil when making a puree of any kind. Adding a bit of oil while pureeing makes the soup extra velvety, and helps it get extra smooth.

Passing the soup the through chinois strainer is the final step for the perfect texture, but you could use any old strainer you have at home if you don’t have one, or even leave it un-pureed for a rustic look.

I like to use multiple garnishes on soups like these when I serve them. This is because they taste great, but served all alone pureed soups look a little like baby food. Here I used some beef tongue (you can substitute ham) fresh chives, creme fraiche for a sour note, and croutons for a little crunch and texture. 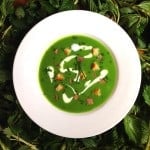