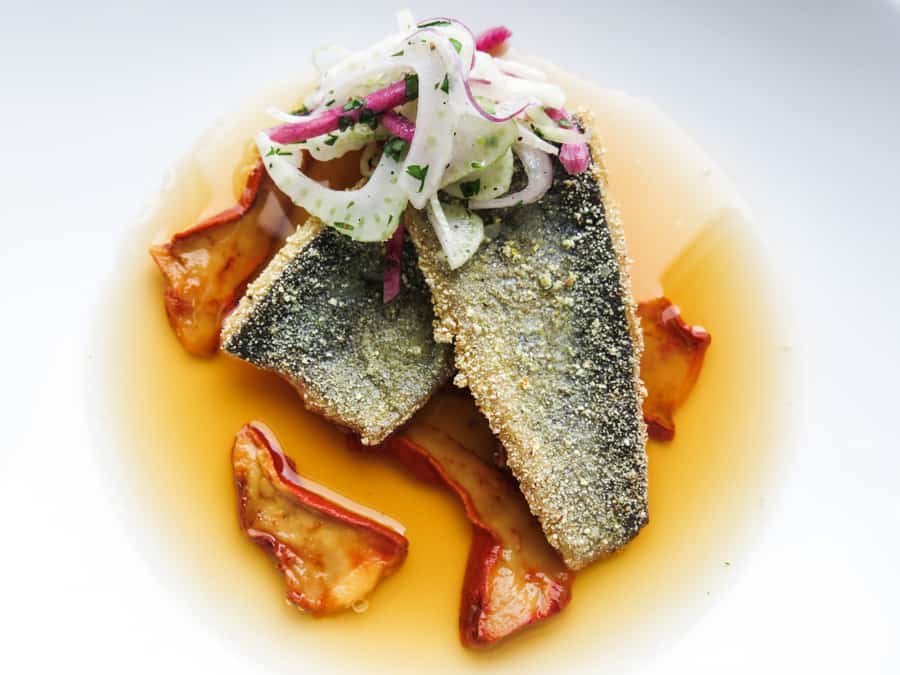 Sometimes you can try something and fail, and come out better than if you’d succeeded. I’ve wanted to share this for a while, since if I don’t, all the work I put in, and the pictures I took will sit on a hard drive, and no one will ever see them. Here’s what happened:

Last Winter, I was working the line at Heartland when my boss came up and mentioned he’d signed a deal with a publisher to write a book. I congratulated him, but, having been taken plenty of pictures on my iphone with a plastic tripod and having dreams of a book of my own, I asked if I could send him some pictures for his editors to look at, he agreed. 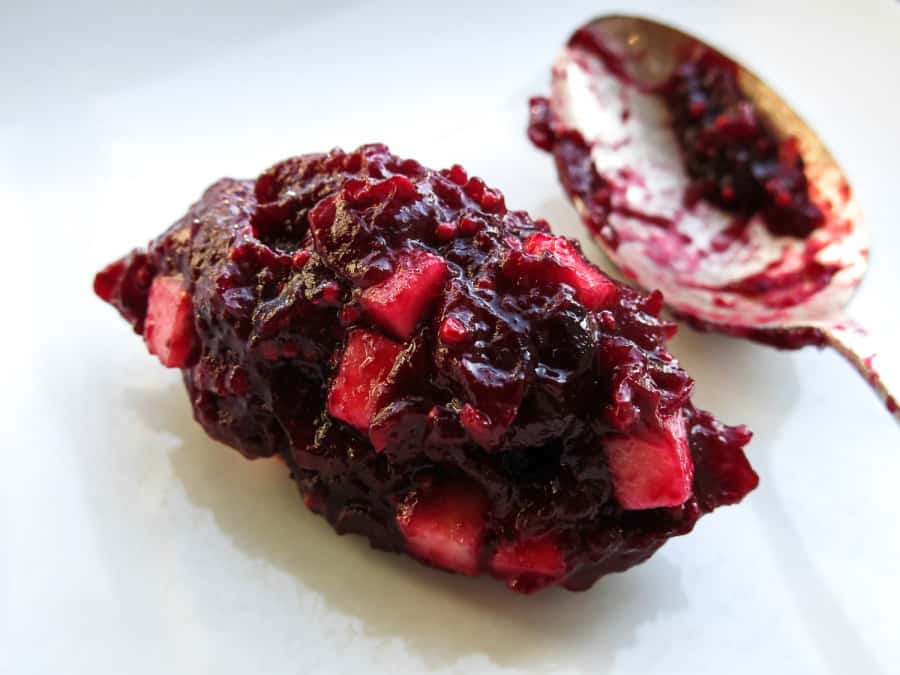 I brought the pictures the next day. He liked them, in fact, he liked them so much he told me that I would be the photographer for the book, which was to be published by a group formerly of Simon and Shoester: Burgess Lea Press. I was inspired, I wanted to immortalize my boss’s work, and show everyone how special the food we made was.

As it sat, I was to be a one man operation: I would choose the recipes to shoot, cook, style and photograph them. Now I know this is a job better suited to 3 people, at the time though I didn’t know how much work it would be, or care for that matter.

I had zero money, but I took a whole paycheck and bought a new point and shoot camera. I made some equipment too, since the editors agreed to my working on the project if I had some basic lighting equipment, which, to me, meant cardboard wrapped in aluminum foil to reflect light-I’m on a budget, remember?

The days I would shoot I came in early in the morning, around 8, and then cooked the line at night until around 11 or so. It was just me in the morning, my coffee, the camera, and the food.

I worked alone, all the lights turned off, next to the giant window that floods the dining room with light, all of my mise en place laid out on a three tiered cart in tiny dishes that I could push around the restaurant. 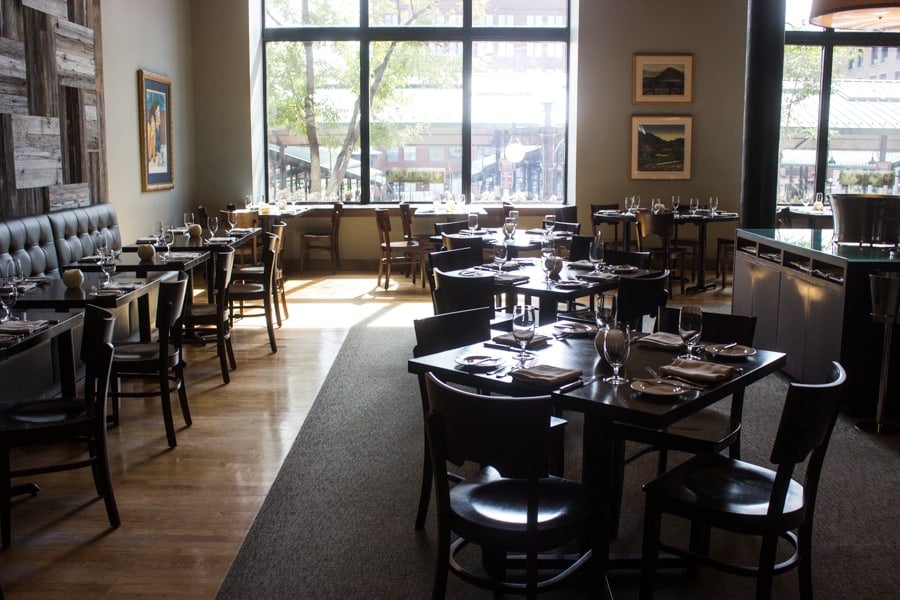 The sunny window where I shot most of my pictures

My coworkers said that it must be tiring to get up so early to work, but to me it was like meditation. I was proud to be charged with the project, and the opportunity to show the masses what the food we made at Heartland looked like through my lens. 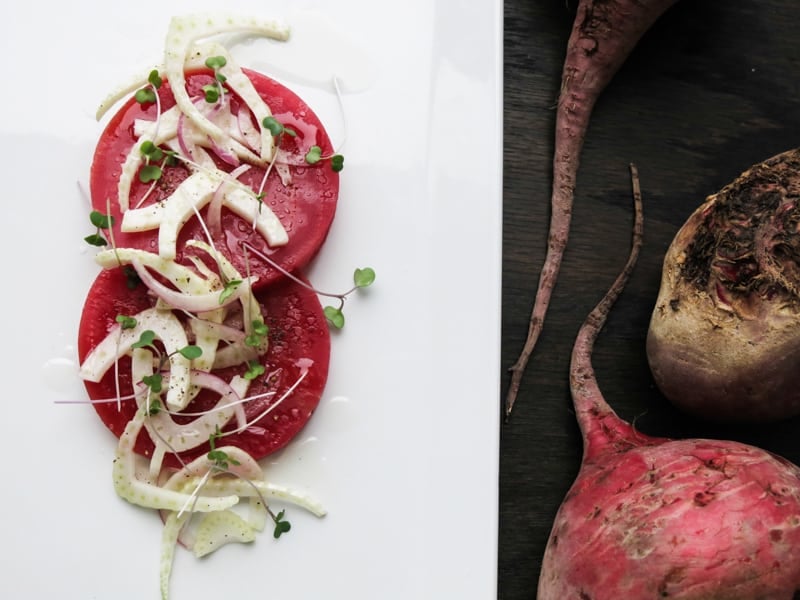 But. The editors noticed my lack of experience pretty quick, and professional photographer Chris Bohnhoff was hired to take over the photography portion. Chris is a passionate artist, and we got along immediately. I continued to be part of the project though, functioning as the art director and food stylist. After the first round of shooting, the project was put on hold, and another photographer was brought in.

Chris and I stayed in touch though, and collaborated on this fun video last year after the book project. We have another video in the pipeline for this spring, although it’s set to be more focused on hunting as opposed to actual cooking. 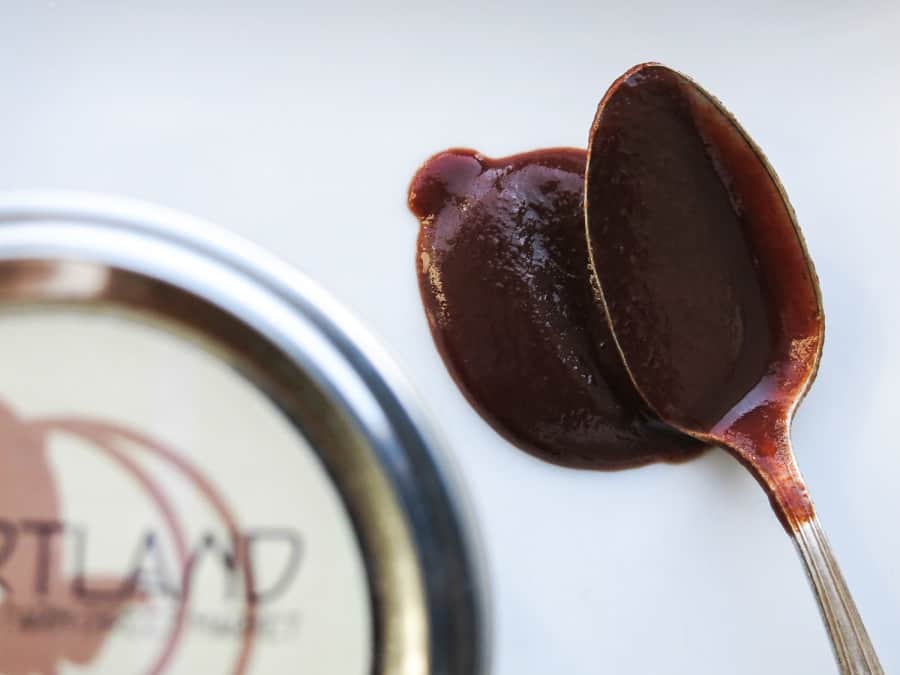 The new photographer was Tom Thulen, a veteran food and still life photographer. The first time I met him is still branded in my mind. With his long dark coat, little mustache curled up on each side, and the biggest Nikon I’d ever seen held at his hip, he looked like a gunslinger. He was cool. Tom and I got to work, shooting from scratch.

We would usually shoot on the weekend mornings, since there was more help available on the line at night to take my place, since when I was alone and with Chris I worked myself so hard I got pretty sick a couple times, it was a little much. 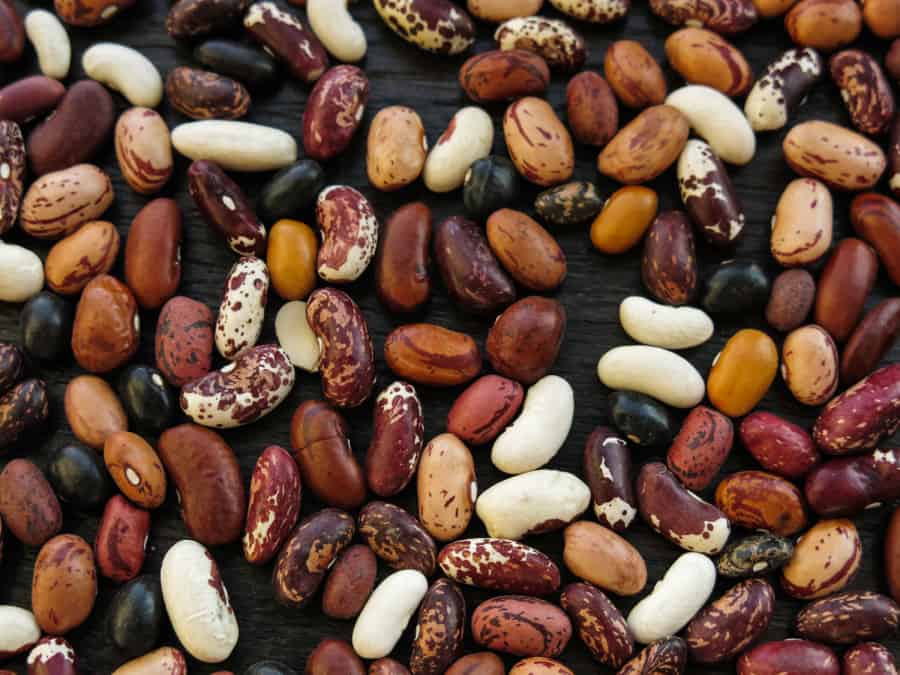 Early in the week I would let Tom know what I thought we could shoot based on availability. Keep in mind too that the deadline was short, only a couple months, and we were shooting the recipes of a restaurant that is the definition of “hyper-local”.

Obviously it would be impossible to find high quality heirloom tomatoes, rhubarb, or asparagus in a Minnesota Winter, so we would shoot what we could, and eventually got an extension on the deadline to move into Summer, when the true products we used were actually available.

On to the actual photography though.

Shooting the dishes was one of the most intricate things I’ve been a part of. There seems to be this idea that if you like to cook, and buy a camera, you are instantly a food photographer-nothing could be farther from the truth.

I thought the pictures I’d taken for the book were good, but I will never, ever be fit to even clean the dust off the lens of either Chris or Tom’s cameras. I’ll tell you a bit about our M.O. when it came to shooting the book, and you’ll understand.

Since I would talk with Tom early in the week about what we would shoot on the weekend, he had a general idea of colors to expect for the dishes, or the size they would be, etc. From there he could choose appropriate props: backgrounds, silverware, napkins, plates, platters, glasses, bowls, you name it. 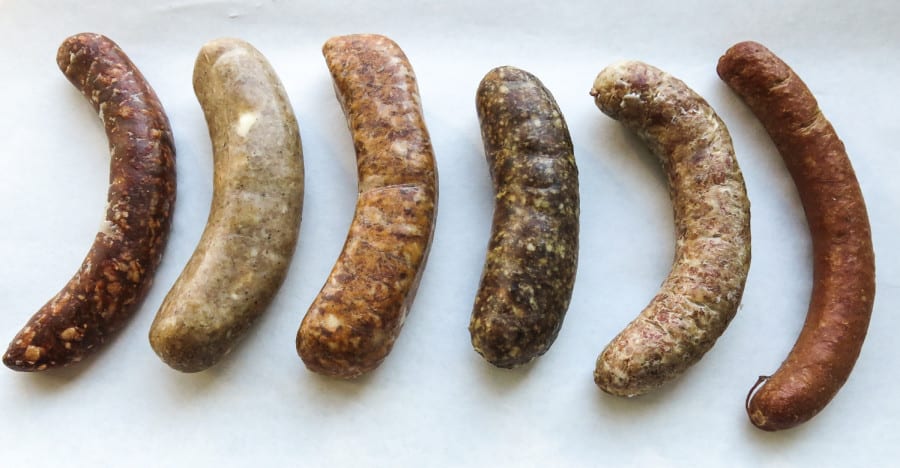 A few of the countless varieties of sausages made at Heartland, on some butcher paper.

Some times we would just take a walk around the restaurant together, perusing sample plates and restaurant dishes, talking about what sort of plates would go with what and why. Every single element is important, and every item in a picture is in it’s place for a reason, be it to fill space and add depth, lines and movement, or draw your eye to the subject. 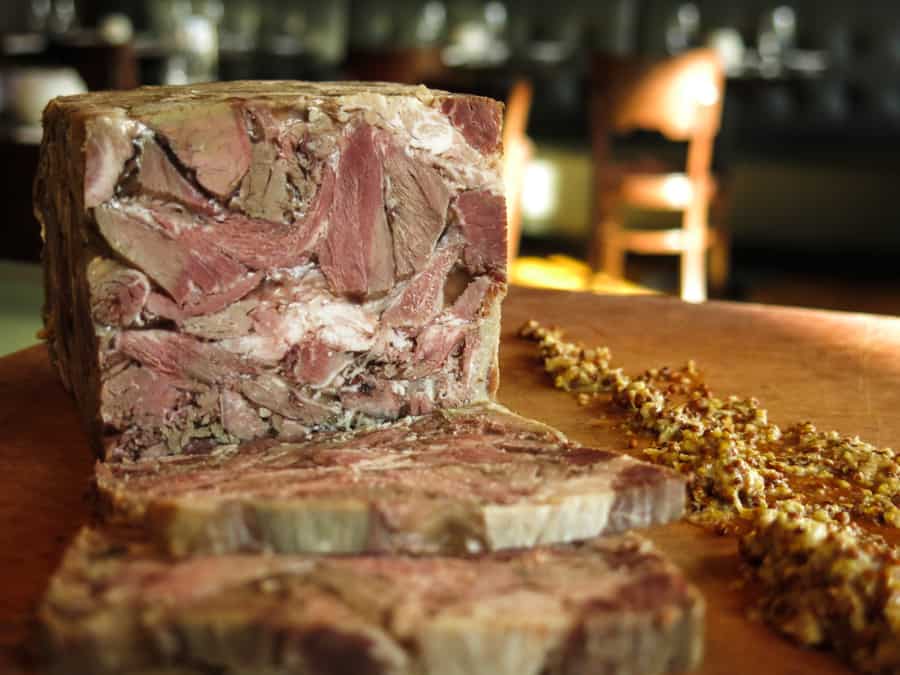 From there, we’d talk about a table setting or background, and I would cook the dishes while he set up the ambiance for the photo. After the dish was prepared, we’d begin to style it. We’d  start shooting things that wouldn’t lose their quality on the plate first, for example, if we were shooting a chicken breast with some greens and sauce, the chicken and greens would be shot first to double check the styling and feel of the picture, only when everything was absolutely perfect would it be sauced. 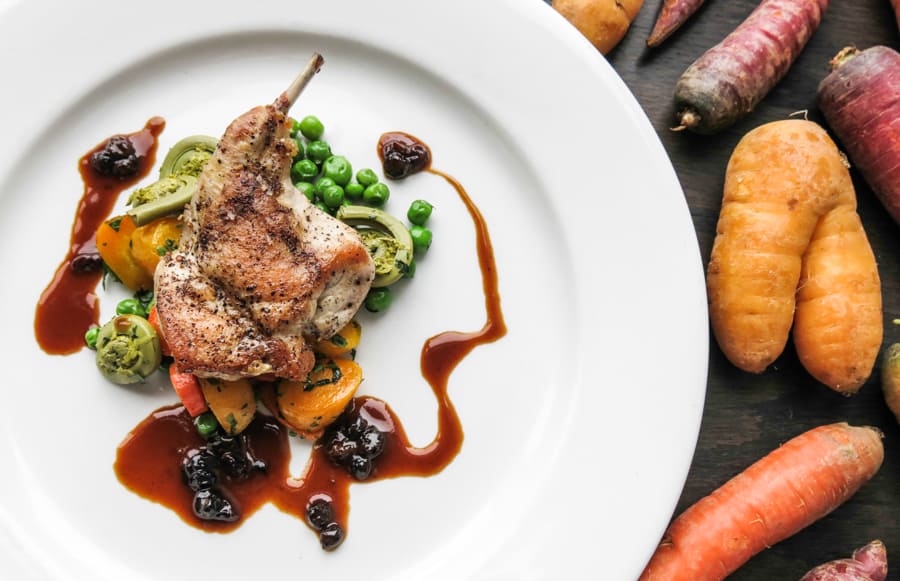 Rabbit with currant glace and spring vegetables, one of my favorites.

Typically, to shoot a single dish would take about 2 hours, sometimes more, sometimes less. If that wasn’t enough, Tom would often set up labyrinths of black foam core in front of the light source, gradually moving them, inch by inch, as we took exposures and discussed how the shadows moved and illuminated or obscured certain aspects we liked.

After a couple of those shoots, I started to refer to him around my coworkers as “the wizard of light and shadow” (pronounced in your best elderly woman voice), because, he is.

We kept on chipping away at the shoot list for about 7 months, until one day, we finished it. See more about the upcoming release here.

All in all, the opportunity to work with Chris and Tom was invaluable. It changed the way I think about photography completely, and gave me a new respect for the intricacy of their art. I’m forever grateful for the time we spent working together.