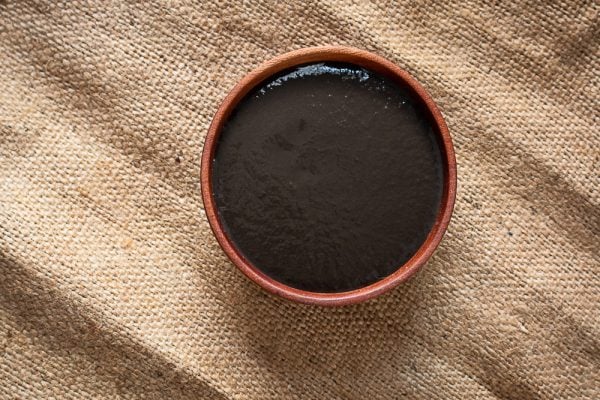 "Leave mushrooms on the counter until they turn into a black, inky mess, then puree this goop and eat it" sounds like instructions in a recipe for someone on a quest to make themselves sick. For the unfamiliar, Shaggies are part of a group of mushrooms called inky caps because the mushrooms quickly turn to a goopy black mess, (a process called deliquescing) which, in the past, was used to make a kind of ink.

Newsflash: you can eat the mushroom ink, and it's actually good. Good enough that I served it to two Mycological societies last year in Brainerd. So, before you toss any less than perfect ink caps out with the pencils shavings, you might consider a few possibilities.

As an aside here, know that I'm only using shaggy mane mushrooms (coprinus comatus) for this process, as using other Coprinoids could result in alcohol sickness as happens with Coprinopsis atramentaria, the tippler's bane.

I have to thank David Arora and Chad Hyatt here for mentioning the process in one of my favorite Facebook groups, without them, I would've never tried it. If you're not familiar, Chad's also the author of The Mushroom Hunters Kitchen, which he self-published a few years back. 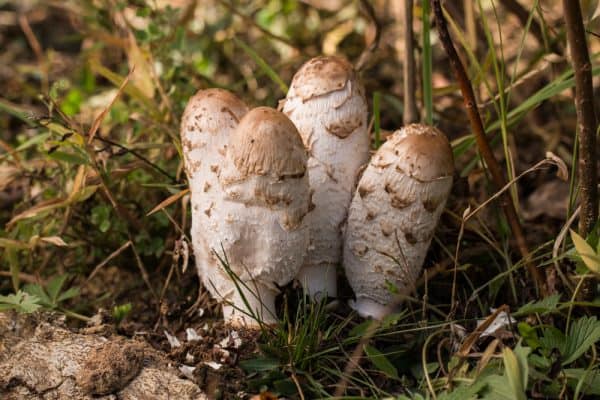 A nice cluster growing around a large pile of dug earth in my friends log yard.

If you've picked shaggy manes, you're probably familiar with their short shelf life--a day or two out of the ground and they can start to get inky, goey and soft on you. It's counter intuitive to eat things "past prime" especially with wild mushrooms, but with shaggy manes I found it helpful to take look at what deliquescing is, and more importantly, what it does. 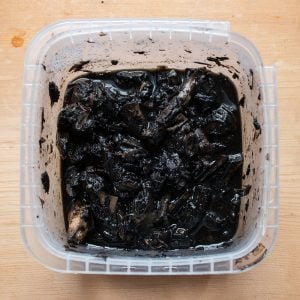 From the journal of Wild Mushroom Hunting:

"Deliquescence is a process whereby the pileus liquifies itself to allow the spores to escape. The pileus starts liquifying itself at the margin, leaving the margin tattered and flaring (above the liquifying zone, the pileus is usually straight vertically). Often there is a reddish zone at the transition between the white immature gill tissue and the liquifying tissue which is black with the mature spores."

As I understand it, this should be an enzymatic reaction, basically the mushrooms way of speeding up the process of spreading their spores, as opposed to decomposition by nearby fungi, molds you wouldn't want to eat, etc.

Huitlacoche is another good example of deliquescing, and slightly similar in flavor, which I'll get to. Consuming deliquescing mushrooms, or at least the two species I mention here, is different than say, eating a moldy mushroom you found on the ground, or in your fridge the later being a good way to flirt with indigestion.

The Grey. Shaggy ink butter is a good way to preserve your mushroom goo. 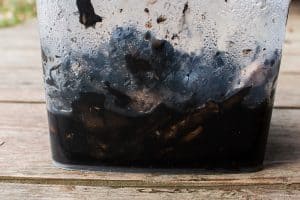 As the mushrooms deliquesce, they'll get liquidy, and inky.

As I dug deeper over the past year, going over my tasting notes and comparing them with other hunters, more than one experienced shaggy mane eater told me they prefer to let their shaggys get a bit inky before cooking them, as they preferred the flavor.

Personally, I prefer my shaggy manes either or. I either want them firm, fresh and pristine, or completely gone "to max capacity" if that makes sense. Part of what I love about shaggies is their texture, and getting them inky means they're going to be a bit softer. Personal preference.

The basic process, stirring the mushrooms around and keeping them in the fridge over a six day period. Leaving the mushrooms to deliquesce at room temperature will speed up the process, where refrigeration will slow it. 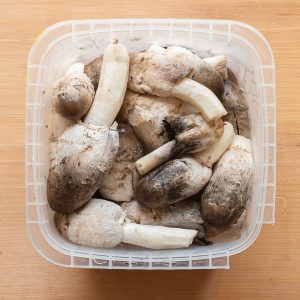 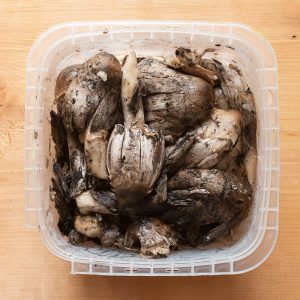 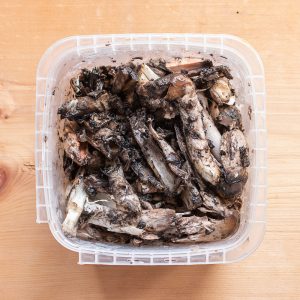 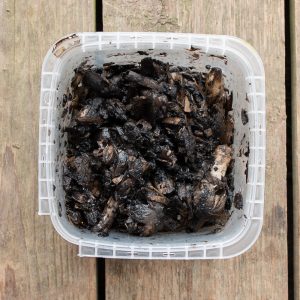 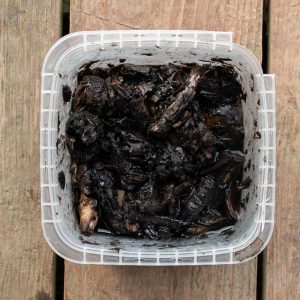 How does it taste?

The big question. Shaggy mane ink tastes mushroomy, like you might expect, but the flavor wasn't as deep or nuanced as I'd hoped, it's good, don't get me wrong, but I was expecting more of a deep umami blast.

It's mild and pleasant, similar to a puree made from common mushrooms like agarics, but with a noticeable difference I tasted right away. If I get lucky enough to grab another large flush of them, It might be fun to inoculate the goo with koji fungus for 24-48 hours to build some additional flavor, cooking and pureeing afterword. 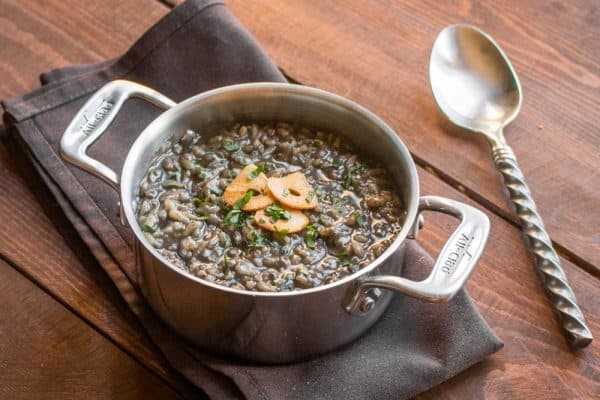 Black shaggy rizzo with fried garlic and parsley was excellent.

It is worth it?

For me, it depends on the harvest. For example, If I came across a large quantity of shaggy manes, of varying ages (I just got a message a few weeks ago from someone with 20+lbs in Iowa!) like with other mushrooms, I'd separate out the most pristine ones for eating fresh. The mushrooms that don't make the cut could get made into ink and frozen to preserve them.

If I came across a patch of shaggy manes and they were all beautiful and young, none of them would be made into ink, If I find some at a stage too wet for me to eat fresh, they might all be ink. I would let the mushrooms and your preferences be your guide. 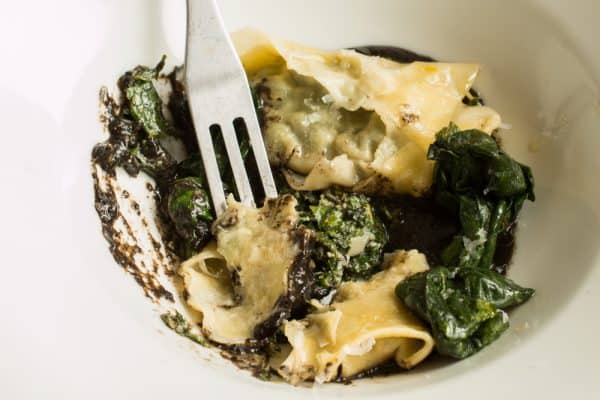 Putting the ink on the bottom of the bowl before adding dressed pasta (here herb and cheese ravioli with sochan greens) ensures an appealing look. 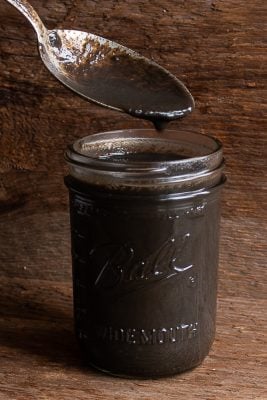 Shaggy mane ink has a very slight after taste to it, not unpleasant exactly, but present. If you've ever eaten huitlacoche, especially some that have gotten a bit soft or black, you'll be familiar with the taste. Some people call it metallic, tin-y or aluminum like, and, to be fair, that's not a bad comparison. I would say saffron can taste tin-y too.

At least with my ink the taste was barely noticeable, especially after pureeing with shallots, a splash of wine, and whisking in a healthy glob of butter. The big takeaway here I found interesting was the parallel flavor of two deliquescing mushrooms.

Huitlacoche and shaggy mane mushrooms are in two completely separate genus, and fruit differently, but it was interesting to notice the similarity in taste that I can only assume is a result of the deliquescing process.

Recipes and ideas for shaggy ink

The finished puree can be added lots of things, but, it's also black, and, in the wrong place can make an unappealing dish. Think of blank canvases of color here, or ways to use the puree where it's placed under the food, rather than tossed in, or spooned over the top.

Whisking with butter and spooning into a bowl before you add some freshly cooked pasta tossed with cooked greens, bacon and mushrooms would be nice, as is black shaggy risotto and compound butter. Creamy mushroom ink soup is a natural one, too, and would be great with chopped shaggies fried and spooned on top. So many things!

Warm up the shaggy mane ink, swirling in some butter, then season to taste. Arrange dressed pasta on top. Pictured is herb and cheese ravioli with sochan greens tossed in a bit of olive oil. 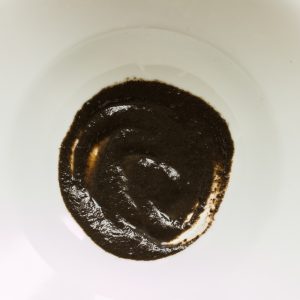 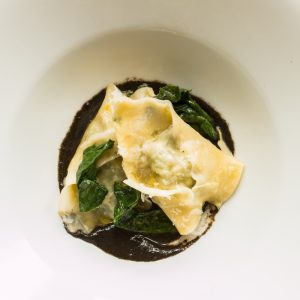 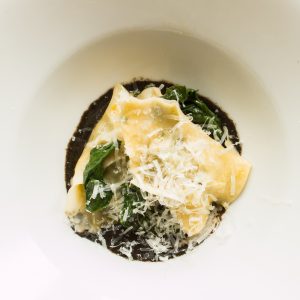 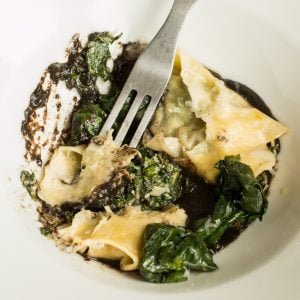 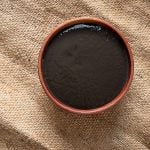 *Minding the ambient temperature here isn’t a huge deal since the mushrooms are being digested by enzymes, but if it’s warm (summer, etc) the container could draw some fruit flies, which are annoying. There is no danger of GI issues here as the boiling is used as a killstep to sterilize the puree. 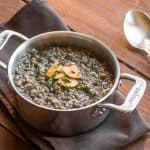 *To make garlic chips, slice some garlic paper thin the short way and sweat in a film of cooking oil on low-medium heat until golden, then drain on a paper towel and reserve until needed. It will hold at room temperature for a day or two.