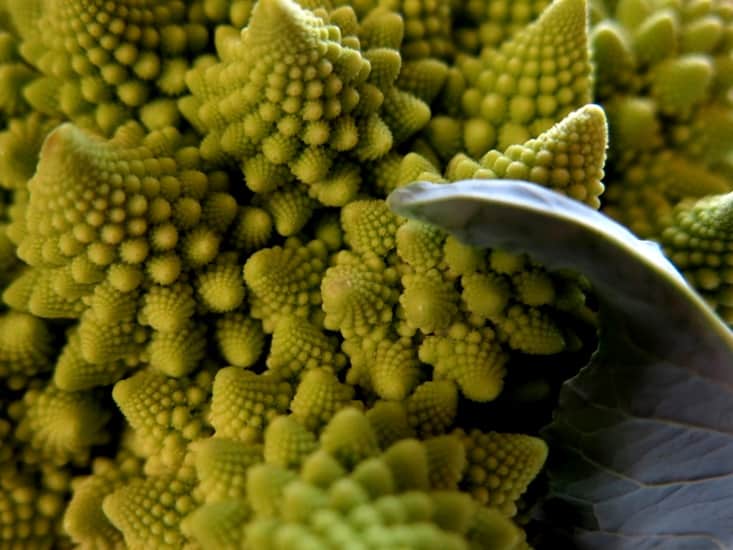 My old chef Andy put me in charge of making a risotto special that constantly changed with whatever his crazy connections would provide us. That was the first time I cooked with romanesco, or ate it for that matter. Sure you can put romanesco in risotto, and that’s how I first cooked it, but it’s much better on it’s own, simply sauteed, which will allow you to appreciate it. What’s so great about romanesco? besides being the most beautiful vegetable ever, it’s delicious.

I’ll be honest, it is a bit difficult to come by this in Minnesota, and their season is pretty short. If you want to get ahold of some, keep your fingers on the pulse of the farmer’s markets, especially the best farmers market in the twin cities, which is the one in Lowertown St. Paul. Unlike Minneapolis farmer’s markets, the St. Paul one doesn’t allow mainline purveyors to sell their wares. This means you won’t be confused by seeing things like bananas and pineapple, as these, last time I checked are not locally grown in Minnesota. Our local farmers should not have to compete with the economies of scale used by mainline corporate food dealers. Nuff said though, lest I get riled up.

Romanesco can be cooked just like cauliflower. Simply trim the florets and cook. It is fun to play around with different ways of preparing it though. Here are a couple different ways you might try trimming, cutting and cooking it:

How not to cook

I would have never thought of this, but last year I was witness to a horrible crime. We had some interns or something playing around making soup. In the cooler was a ton of romanesco. I have found that my coworkers and I have a tendency to hoard it, everyone wants to use it and throw it on a different place on the menu. When I came into work one day, to my horror I saw a new soup had been created: “Pureed cream of romanesco”, which is pretty much the only way you can screw up.