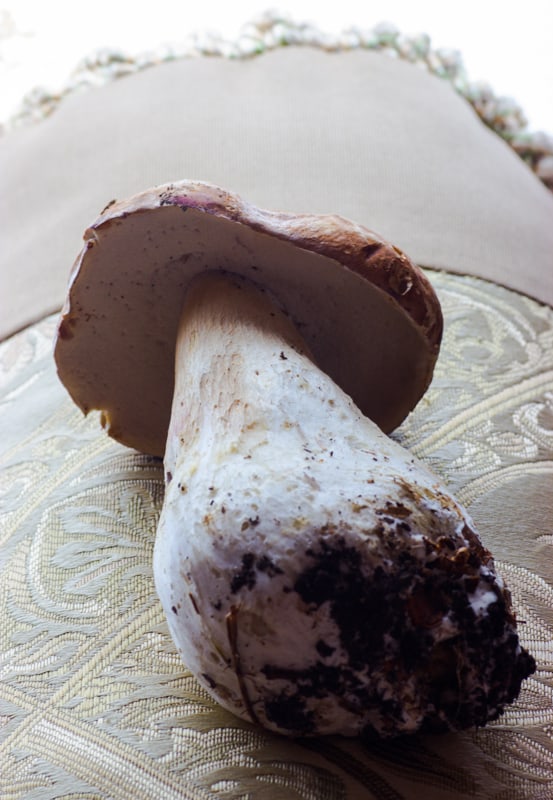 This king was a little old, but not bad. After his closeup he went straight to the dehydrator.

It was a day I’ll never forget.

I was prepping the line getting ready for service at the restaurant. At about four, I took a break to grab some staff meal I could shovel in my face (you don’t have time to lollygag while eating in a kitchen).

While eating, I multi-tasked checking my email and other things. There was a picture message from my mushroom hunting buddy (talented twin cities comedian Mike Rasmussen), he was asking what the identity of a mushroom was he had found; when I saw it I about went nuts.

I dug in the archives and found an original photo from the first hunt. Picture by Mike Rasmussen

People send me pictures of mushrooms all the time. Sometimes I can tell them what it is, sometimes I can’t. This time though, even though I had never picked it, I knew what I was seeing: a mushroom with as many names as it has variations. Real quick, here are some colorful names I like: If you know any others I can add, let me know!

German: Steinpilz. “Stone mushroom” Hinting at it’s weight, which is really a thing to behold.

Russian: Beliy Grib. “White Mushroom” This doesnt’ refer to it’s white stem, but the white of all that is regal, and royal.

Italian: Porcini. “Little Pigs” If you’ve seen their fat little stems, you understand this one.

French: Cepe/Cep. This should translate to something like “tree trunk” if I’m not mistaken, hinting again at their tell-tale, fat stem.

Back to the excitement. A few days before, we had a front of sever weather roll through the Twin Cities. We knew that rain helped mushrooms grow, but this seemed to make them explode. He said the boletes everywhere along the hillside of one of our chanterelle patches. 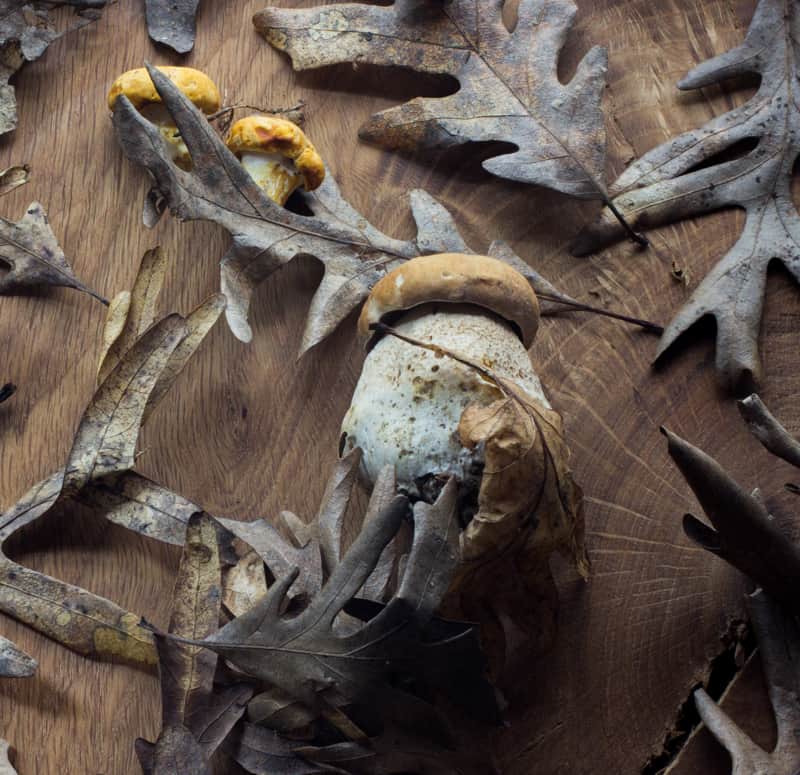 Our porcini/chanterelle patch, on white oak.

Chanterelles, hedgehogs, chicken of the woods, hen of the woods, black trumpets, yeah, we had picked them. But kings? True porcini? Never. I’d never even seen a fresh one. To us they were like unicorns-something you’ve hear stories about, but don’t believe are true.

I sent him a three word reply, and I can remember it verbatim:

To us it was the stuff dreams were made of. I ran up to my boss and told him the good news. Now remember it was a Friday night, one of the busiest days of the week, and I’m running the tasting menus, which are pretty important. I knew boss would be excited to hear that we were finding porcini, but I could never have expected him to tell me to take the night off and go pick them.

“I’m Italian, we eat fresh boletes. Bring them in!” 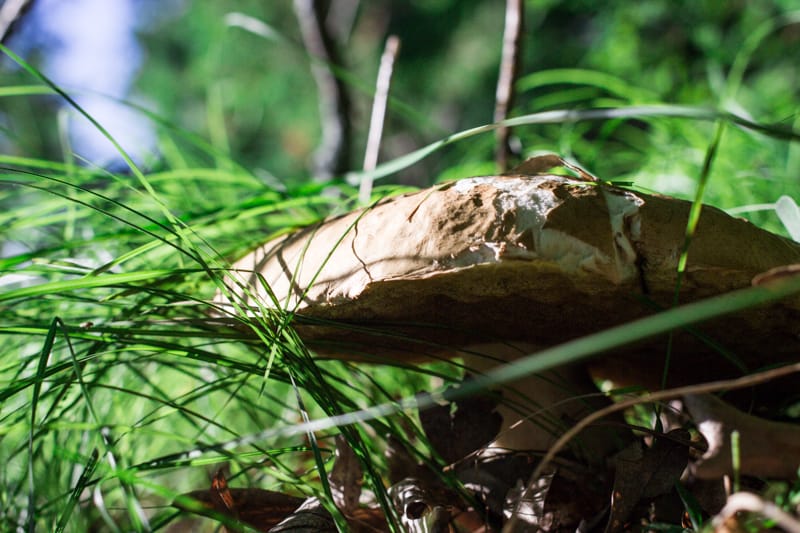 An Older porcini, if this isn’t riddled with bugs, I might remove the pores, slice and dry it. 90% of the time these are shot at this age.

Bring them in we did. I ran out of the restaurant feeling like a convict out on work release. I mean how often do you think a cook get a Friday night off? I sped over to the spot where my friend was waiting. We gave each other a fist pound and then moved into the area where the kings were. They had already picked about half a grocery bag full. But if I know anything, it’s that there will always be a couple extra mushrooms that you’ve missed, and a few extra eyes are worth their weight in gold while you’re hunting.

When we got to the spot it was like stepping into some fairy land, the hillside was brimming with chubby little boletes. I was shocked at the sheer weight of the things, some larger mushrooms were near a pound a piece, with older ones being even bigger. We picked for a while and filled another half grocery bag, then went on our way.  When we check it again the next week they were all gone, puddles of goo remained where precious porcini had lived out their lives in a matter of days. 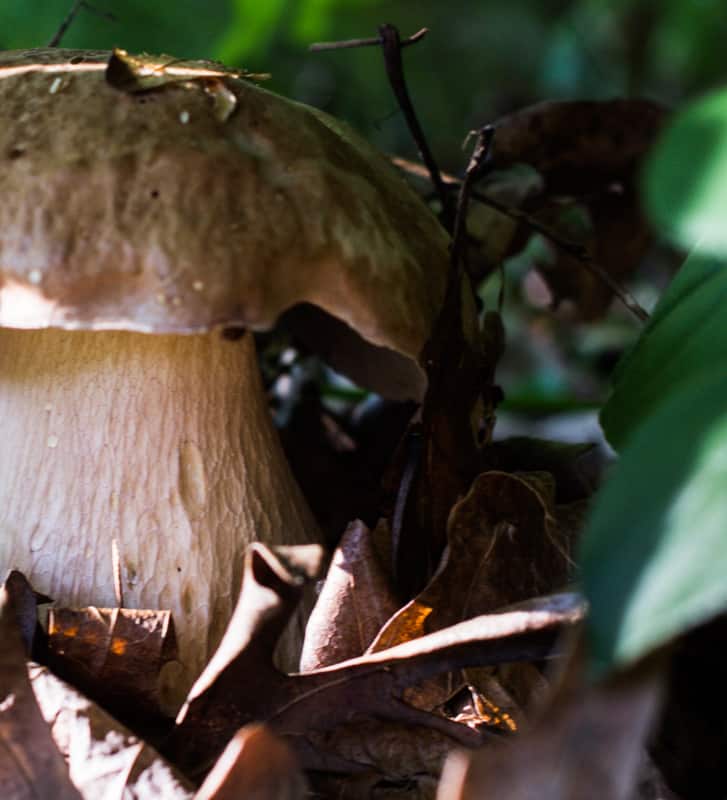 Alas, even our hero mushroom was fit only for dehydrating. Isn’t he cute though? Notice the netting pattern on the stem.

For the next 2 years the spot was silent. I would go there a couple times a year to check on growth and other species that might be around, but there were no kings. I began to write the porcini picking off as a fluke or some random twist of nature.

With the incredible rain we got the last two weeks in central MN though, things changed. I saw my friend post some pictures of kings that he was picking, and I thought it would be a good time to go check, just in case. Wouldn’t you know it, they were back. Turns out we have a bona-fide patch after all.

Now I’ve picked porcini in other places, and they aren’t as rare as this post might make you infer, but finding them in eatable shape is a real treat, and having a place you know that will give bags full, as opposed to scattered fruitings like I see in the woods, is a rare find. Knowing how sensitive they are to heavy rainfall is good knowledge too, as well as the fact that the best patch we’ve found was textbook: a sunny, grassy slope near white oaks that give chanterelles. Hopefully you can use this to your advantage, good luck!